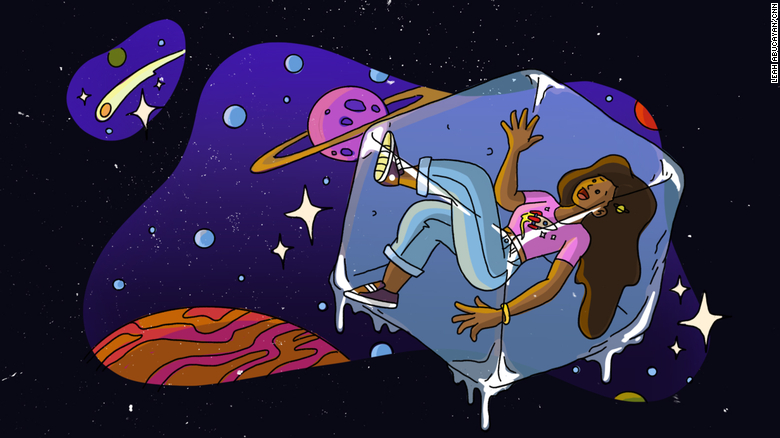 Nope, not A. Contrary to many older sci-fi flicks, like “Outland” and “Total Recall” (1990), your head and body will not explode. Your body remains intact – it’s what is going on inside that kills you.

Dropped into the sudden decompression of space, “all of the oxygen that’s in your body and in your lungs starts getting pulled out of your body into the vacuum,” said Dr. Kris Lehnhardt, a leading scientist in the Human Research Program at the NASA Johnson Space Center.

“Your lungs will start to expand in a way that will likely cause them to collapse or to pop,” he added, unless all the air in your lungs is immediately expelled.

Scientists believe oxygen deprivation will render you unconscious within 15 seconds, with death occurring within the next 60 to 90 seconds.

It’s not C either. Space is an unthinkable minus 455 degrees Fahrenheit, very close to absolute zero, the point when no heat energy remains. But the only way that heat transfers in space is via radiation, a very slow process. It would take hours for all the heat to radiate from your body and turn you into a popsicle, and you’d be dead from oxygen deprivation long before that happened.

What about D? Could you live long enough to cross a gap of space between two spacecraft? Expanse fans know Naomi did push all the air out of her lungs just as the space lock opened, which theoretically means her lungs would not explode. She also used an injection of some oxygen mixture just as she was about to pass out.

“That might be possible, but nothing like that oxygen injection exists today, so that scene is more on the fiction side of science fiction,” Lehnhardt said, adding that even if she made it, she would need immediate access to a hyperbaric chamber and medical treatment to survive.

The answer is B. The “woosh” of air escaping from the airlock will propel you out into space – and your dead (and ultimately frozen) body will travel at that momentum until it hits a piece of space junk or is burned to a crisp by a star.