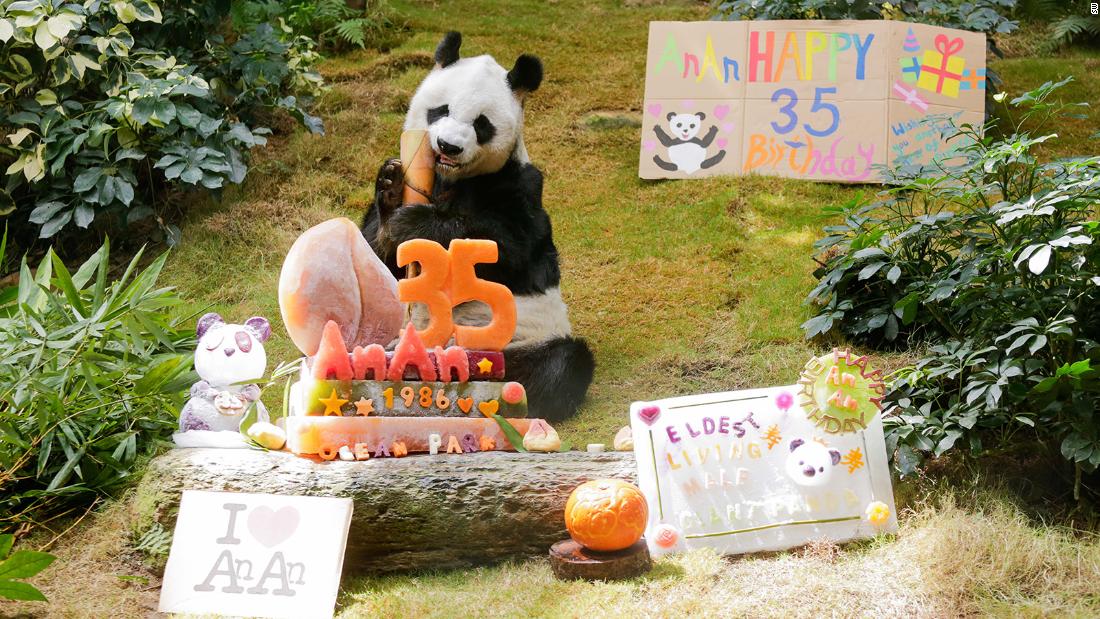 Hong Kong (CNN) — Hong Kong Ocean Park’s resident panda An An has just turned 35, making him the longest living male giant panda under human care in history. In panda years, that makes An An an impressive 105 years old.

According to Ocean Park, giant pandas in the wild typically live about 20 years on average, while lifespans of those under human care can reach 30 years.

To celebrate, the theme park threw the furry birthday boy a glorious birthday feast with a Haagen-Dazs cake.

An An was seen snacking on icy treats to cool him down in the summer heat. He was presented his favorite snacks, bamboo shoots and fruits.

An An gets stuck into his birthday feast.

The Chinese characters for “An An” are 安安, which means “peace.”

Born in the wild of Sichuan, China, An An was part of a pair of pandas that was gifted to the Hong Kong government by China in 1999. His mate, Jia Jia, died in 2016, at the age of 38. At the time, she was the world’s oldest known living giant panda.

The rescued giant panda has been under Ocean Park’s care for 22 years.

According to the World Wildlife Fund (WWF)’s 2014 census, there are about 1,864 giant pandas alive in the wild.

Sichuan province — whose capital is Chengdu — has turned its cuddly inhabitants into part of a tourism identity.

But the good news is in the last decade, the number of giant pandas in the wild has risen by 17%.

This encouraging data prompted the change of its classification from “endangered” to “vulnerable” as an update from the International Union for Conservation of Nature.

Located on Hong Kong Island, Ocean Park is a theme park that is also home to a variety of wildlife animals.