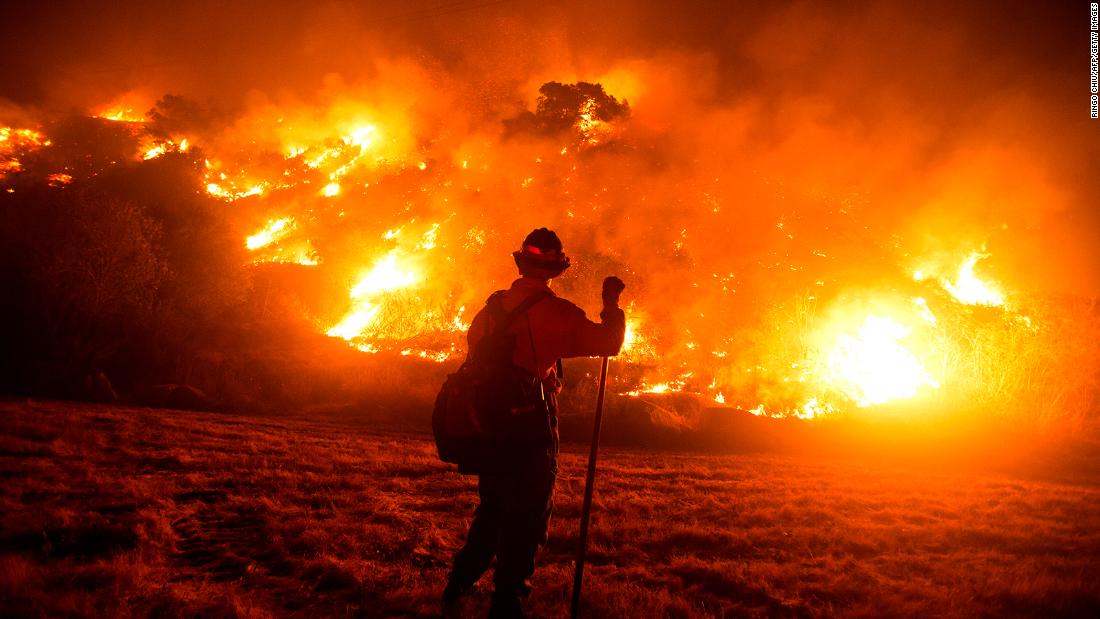 The $1 trillion bill, which passed the Senate on Tuesday but still needs House approval, would provide $600 million to increase the base salaries for firefighters within the Interior Department and Agriculture Department by up to $20,000 or 50% a year, whichever is less. It would also convert at least 1,000 seasonal firefighters to permanent positions.
Firefighters have been leaving the federal service, as CNN reported earlier this summer, in large part due to the low wages paid for dangerous, unpredictable work. The departures are making it harder for crews to respond to the increasing number of forest fires. More than 3 million acres have burned so far this year across the United States — 1 million more acres than had burned at the same time last year, according to the National Interagency Fire Center.
Federal firefighters can often find higher wages elsewhere. While the average yearly salary for a US Forest Service firefighter is $38,000, California’s state-employed firefighters get paid a median base salary of around $71,000, according to a CNN analysis.

“This is a pretty big first step, I’ve never seen anything like it before. But we don’t feel it goes far enough,” said Riva Duncan, who retired as a federal firefighter in December and and currently serves as the executive secretary of the advocacy group Grassroots Wildland Firefighters.

The group is calling for 50% raises for federal firefighters across the board as well as a reclassification of the federal job series to better reflect the dangerous nature of a firefighter’s job. That kind of change would make sure firefighters are not scrambling to pick up overtime and hazard pay in order to survive financially, Duncan said.

California Democratic Sen. Dianne Feinstein, who has advocated for higher firefighter pay, wrote in a recent op-ed that the $20,000 bump provided by the bill would narrow the salary gap between federal and state firefighters, but not eliminate it. Her state is currently battling it second-largest wildfire ever.

Feinstein, along with Montana Republican Sen. Steve Daines, have pushed a separate bill that would go further and create a new federal job classification and higher pay series for firefighters.

The move by Congress follows an executive action announced by Biden in June that will pay permanent firefighters a 10% incentive bonus this year and a $1,000 spot award to temporary firefighters this season — ensuring that no one makes less than $15 an hour, a rate the President called “unacceptable.”
Biden has made it clear he blames climate change for the increased threat of wildfires, in stark contrast to his predecessor, former President Donald Trump, who asserted that climate change was not playing a role at a California wildfire briefing last year.

Biden has made combating climate change a key part of his policy agenda, committing to reduce the country’s greenhouse gas emissions. The infrastructure bill, which he backs, includes billions of dollars for wildfire risk reduction efforts as well as clean energy investments and electric vehicle plug-ins.

The firefighter raise is tucked into the massive piece of bipartisan legislation, which touches on a broad part of the American economy. Not only would it invest in traditional infrastructure projects like roads, bridges and railroads, it also funnels money to boost the nation’s broadband network, provide thousands electric school buses and to start addressing racial discrimination in infrastructure. The bill next needs to be taken up and voted on in the House.