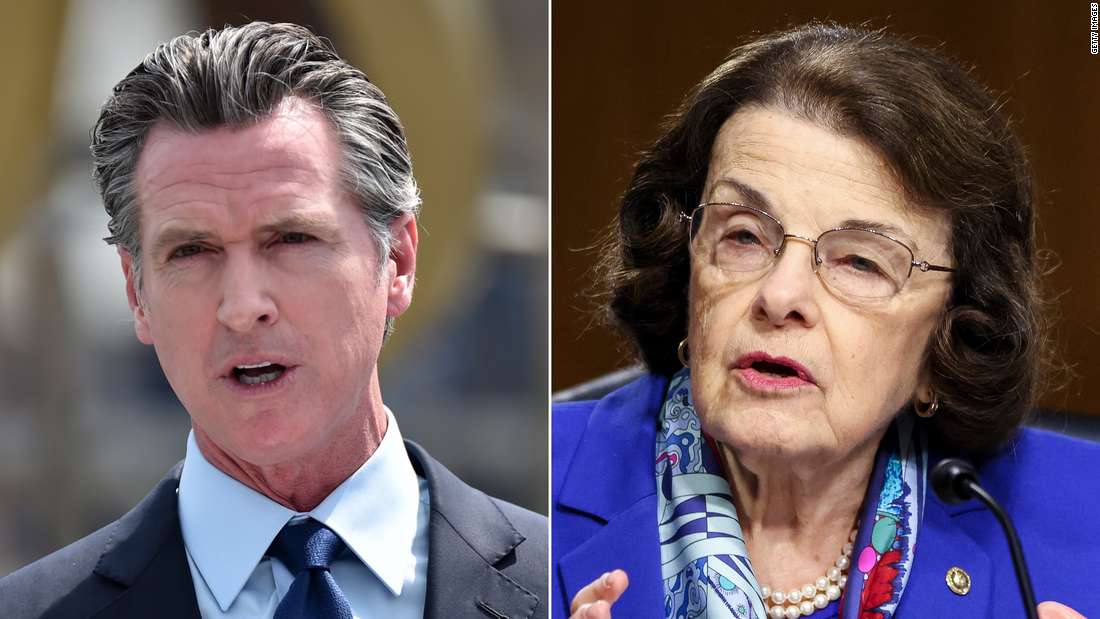 And the 50-50 Senate, currently controlled by Democrats, is run again by Senate GOP Leader Mitch McConnell.

It’s a scenario that Democrats publicly say they’re confident will never happen — but privately, many acknowledge that it’s entirely possible.

Sen. Dianne Feinstein, 88, is less than half-way through her six-year term. Newsom, meanwhile, is struggling to energize Democratic voters, while Republicans are rallying to vote him out of office between now and September 14 — all of which has made the race surprisingly close.

Few Democrats will speak out publicly about their concerns, given that Feinstein is not showing signs of stepping aside and that they are still betting that Newsom pulls it off.

But having witnessed Ruth Bader Ginsburg’s death just weeks before the November 2020 election give then-President Donald Trump another Supreme Court appointee, and with fears over the 82-year-old Stephen Breyer’s seat on the court, a number of Democrats are worried the Senate could flip, too.

And they privately say that in the immediate aftermath of a Newsom loss, the calls would intensify to urge Feinstein to step aside before a GOP governor could be sworn into office.

One California Democratic source, asking for anonymity to speak candidly about the sensitive topic, echoed concerns voiced by others in the party, saying “the right thing to do” would be for Feinstein to step down so a Democratic governor could appoint her replacement since “this is looking like a closer election.”

‘The recall is just against him’

In an interview with CNN, Feinstein made clear the recall election won’t affect her plans to serve out her full six years — no matter the outcome of the race.

“Why would I?” Feinstein said when asked if she would consider resigning in the period between a Newsom loss and before a GOP governor could be sworn in.

Feinstein added: “It doesn’t affect me — the recall is just against him.”

Asked if she had even considered stepping aside as the recall campaign has gotten underway, Feinstein said: “No.”

Feinstein, a barrier-breaking figure in Democratic politics who became the state’s first female senator in 1992 after becoming San Francisco’s first woman mayor in 1978, has faced questions about her ability to effectively do her job in recent years.

After liberal activists and some fellow lawmakers sharply criticized her stewardship of Supreme Court nominee Amy Coney Barrett‘s confirmation hearings last fall, Feinstein’s colleagues effectively removed her as the top Democrat on the Senate Judiciary Committee, a series of events that ultimately prevented her from serving as the first woman chair of the powerful panel.

“It can go both ways,” Feinstein said of the recall. “I think it’ll go the positive way for this governor. I think it’s a misuse of recall, and recall is really a gross abuse of public power. You don’t want the individual to even complete their term.”

A window to fill a Senate vacancy

While Democrats are still confident that Newsom will win, if he does suffer a loss, there will be some time to fill any Senate vacancy. A new governor could take the oath of office as soon as October 22 — 38 days after the election, when the California secretary of state could certify the results.

Newsom faces a recall election September 14, after some Californians criticized his handling of the state’s homelessness problem, devastating wildfires and Covid-19 crisis. There are two questions on the ballot, asking whether Newsom should be removed from office, and if so, replaced by whom.

“With special elections, you can do everything you can and still have a very uncertain outcome,” California Democratic Rep. Lou Correa told CNN. “I think in this situation it’s all about turn-out.”

Many Democrats are still confident though that Newsom will win — and that Feinstein will serve her full term.

“Punditry needs to pundit, right,” said Andrew Byrnes, a major Democratic bundler in California. “But that would be one of a variety of calamitous results, one of thousands of reasons why the recall needs to be defeated.”

But Newsom clearly recognizes the unpredictability of the race — especially in an off-year with voters concerned about the resurgence of Covid-19. So, Newsom is stressing to Democrats the importance of the race — not just to California, but nationally as well.

Newsom recently told the editorial boards of The Sacramento Bee, The Fresno Bee, The Modesto Bee and The Tribune of San Luis Obispo that people are not fully considering what would happen if he lost.

“I don’t think the national Democratic Party’s asking themselves that question,” Newsom said. “If this was a successful recall, I think it would have profound consequences nationwide, and go to not just politics, but to policy and policymaking.”

“The California dream,” he added, “I think is still alive and well.”

Both sides recognize the stakes involved.

“Newsom took a huge risk by making sure no other prominent Democrats ran, and now there’s no fallback in case the recall question passes,” said Dan Schnur, who had worked in GOP politics in the state and now teaches political communications. “Feinstein would almost certainly not step down if a Republican was elected, but the fact that the polls are so close is making a lot of Democrats nervous.”