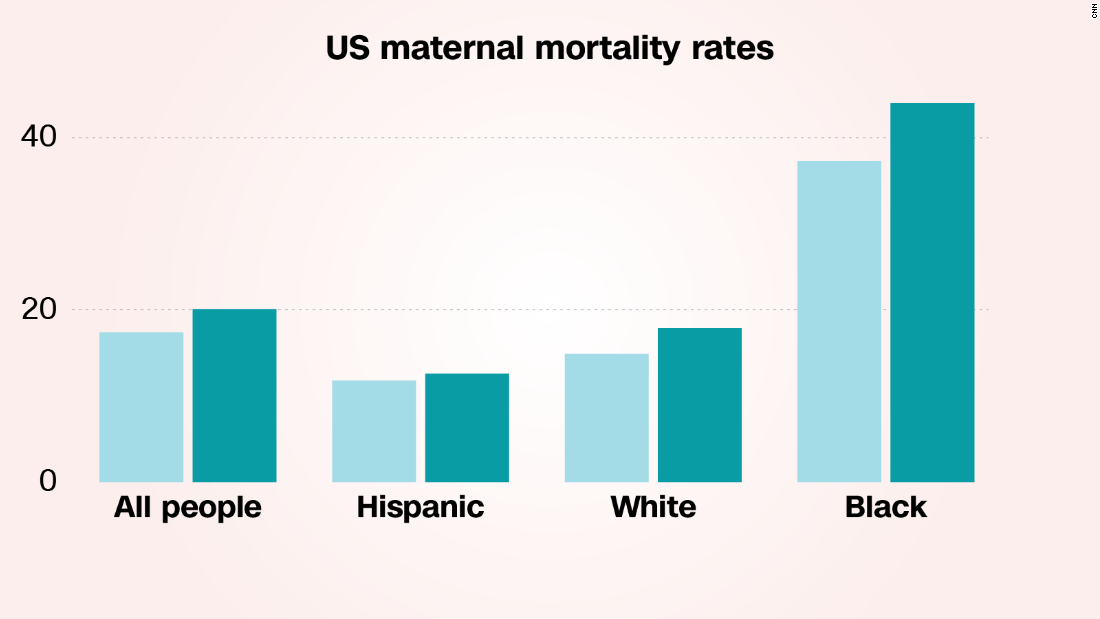 “Even before the pandemic, the United States was considered the most dangerous developed nation to be pregnant,” said Stacey Stewart, CEO and President of the March of Dimes, a nonprofit that advocates for better health care outcomes for mothers and babies. “Black women and women of color are far more likely to die — and that was the case even before the pandemic.”

The increased attention on health care disparities has spurred federal lawmakers to action. In February, Congress introduced the Black Maternal “Momnibus” Act, a sweeping bipartisan package of bills that aim to provide pre- and post-natal support for Black mothers — but most of the bills in the package are still making their way through Congress.

These charts and maps reveal America’s maternal mortality crisis — and why Black women are the most at risk.

The US maternal mortality rate is rising over time

In 2020, the CDC published a comprehensive look at maternal mortality in the United States, and confirmed a disturbing trendline: The rate of pregnancy-related mortality in the US has been rising steadily over the past three decades.

The National Institute for Health Statistics published an analysis of maternal deaths in 2018 and 2019 and found that the maternal mortality rate jumped significantly in 2019, with 754 women dying during pregnancy or within 42 days of giving birth, compared with 658 in 2018. Black women fared worse than any other demographic, with 241 Black women dying in pregnancy, childbirth or after giving birth.

Data collection is essential to understand the reasons behind the rise in maternal mortality, but the way these deaths are classified is inconsistent.

The CDC has previously stated that the maternal mortality rate for Black women is two to three times higher than it is for White women. But a report published this month in the American Journal of Public Health examining the text written on death certificates found that the disparity may be wider, estimating that Black women may be 3.5 times more likely to die of a maternal health complication than White women.
The difference is due to the ways the data is collected — typically, a death by maternal causes is declared by a box that is checked on a death certificate. This method of classification was not standardized until 2003, and there is debate about its accuracy. The AJPH study, however, examined the text written on the death certificate itself, which the authors say reduces the chance of error in classifying a maternal death.

Disparities persist across age and income

The gap especially worsens with age — the maternal mortality rate for all women grows after the age of 35, but the difference between White and Black women over the age of 40 is staggering.

Part of the reason for these persisting gaps can be attributed to racism and systemic discrimination that have long affected Black women seeking medical care. Black women were the most likely out of any group to feel discriminated against or face unfair judgment while seeking medical care, according to a survey conducted last year by the Urban Institute.
Studies have also shown that Black patients are undertreated for pain in comparison to White patients, and many medical practitioners have demonstrated unconscious biases when assessing the pain levels of their Black patients. This research is also backed up by countless real-world testimonies from Black mothers, many of whom describe not being believed by medical professionals when experiencing complications during pregnancy.

Certain health issues, particularly heart conditions like cardiomyopathy, can increase the likelihood of a pregnancy-related death. Among the women studied by the CDC in 2017, Black women were more likely than White women to face underlying health issues that contributed to their deaths.

The CDC stated in a 2019 report that 3 out of 5 of pregnancy-related deaths may be preventable, and that over one-third of the deaths observed were due to cardiovascular conditions.

The prevalence of these comorbidities in Black women is due in part to disproportionate social and environmental stressors.

“We know historically there have been things in place that have prevented many people from having fair opportunities for economic, physical and emotional health,” said Shanna Cox, Associate Director for Science with the CDC’s Division of Reproductive Health.

Cox also told CNN that these chronic conditions may be attributed to the “weathering hypothesis.”

“Because of earlier exposure and cumulative exposure to psychosocial, economic and environmental stressors, Black and Indigenous women experience earlier deterioration of their health, which translates into poorer [health] outcomes,” she said.

The risk of giving birth doesn’t end after delivery. According to the CDC, 33% of maternal deaths occur six weeks to a year after giving birth. During this timeframe, the leading cause of death is cardiomyopathy, a disease which weakens the heart muscle, making it more difficult to pump blood. Between 2007 and 2016, the CDC estimates that cardiomyopathy was the cause of 345 pregnancy-related deaths in Black women — higher than any other demographic group.

Experts say that the disparities in underlying conditions also point to the need for quality postpartum care.

“It’s less of a clinical medical issue than it is a public health issue,” said Gene Declercq, a professor of Community Health Sciences at Boston University School of Public Health. “We need to actually have a system that cares for people throughout their lives. This is not just about maternal deaths — this is about women’s deaths.”

Postpartum care is often difficult to access — in most states, Medicaid benefits expire two months after giving birth — and can be hampered by negative experiences in the health care system. A 2017 study found that women who felt they were discriminated against while receiving maternity care were likely to skip or not schedule postpartum doctor visits.

“We focus a lot on pregnancy because we want a healthy baby, but once a woman has had a healthy baby we say, ‘she’s served her purpose,'” said Declercq, who co-wrote the AJPH study about disparities in maternal deaths. “But we should focus on her health because her health is important in and of itself.”

Much of the country’s population lives in areas where there is little access to quality care before and after giving birth.

A 2020 study by the March of Dimes found that more than 2.2 million women of childbearing age live in counties where there is no hospital offering obstetric care, no birth center and no obstetric provider, which are its three criteria for “maternal care deserts.” The report states that these counties were more likely to have a higher percentage of people living in poverty and a lower median income than counties with access to maternal care.
A 2020 poll by the Kaiser Family Foundation found that Black, Hispanic and Native American women were far more likely than White women to rely on Medicaid than private insurers, underscoring the need for quality care through the federal and state-funded program.
Access to Medicaid has increased in most states following the passage of the Affordable Care Act. Twelve states have still not implemented a Medicaid expansion, which the US Census Bureau estimates has left about 2 million Americans ineligible for affordable coverage.
Legislation in the “Momnibus” bill would allow the government to expand Medicaid to cover up to one year after giving birth, a notable increase in accessibility from its current 60-day limit. Some states have already sought approval to expand their Medicaid programs to cover this extended timeframe. The bill also calls for state funding to collect improved data about maternal health, provide implicit bias training for physicians and care providers, and increase insurance coverage for alternate forms of care including nurse visits, doulas and midwives.

No nationwide data about maternal mortality rates from 2020 and 2021 has been released yet, so we don’t know the full effect the pandemic has had on maternal health care. Beyond the risks of contracting Covid-19 — which can be particularly devastating to pregnant women — expectant mothers are now tasked with navigating a strained, overextended health care system.

But March of Dimes president Stacey Stewart says that the pandemic may have also created an opportunity to bring these issues to the forefront.

The CDC launched its “Hear Her” initiative last August, which aims to educate women about recognizing complications during pregnancy and the postpartum period, and offers information and training materials for health care providers to better respond to their patients’ concerns.

The Congressional “Momnibus” bill has offered hope to advocates as well — Stewart says there is now more legislative momentum to address the Black maternal health care crisis than she’s seen in decades.

“I think the pandemic has been devastating for a lot of families,” she said. “But I think there can also be a silver lining where we can use this opportunity to eliminate the inequities that existed before the pandemic.”