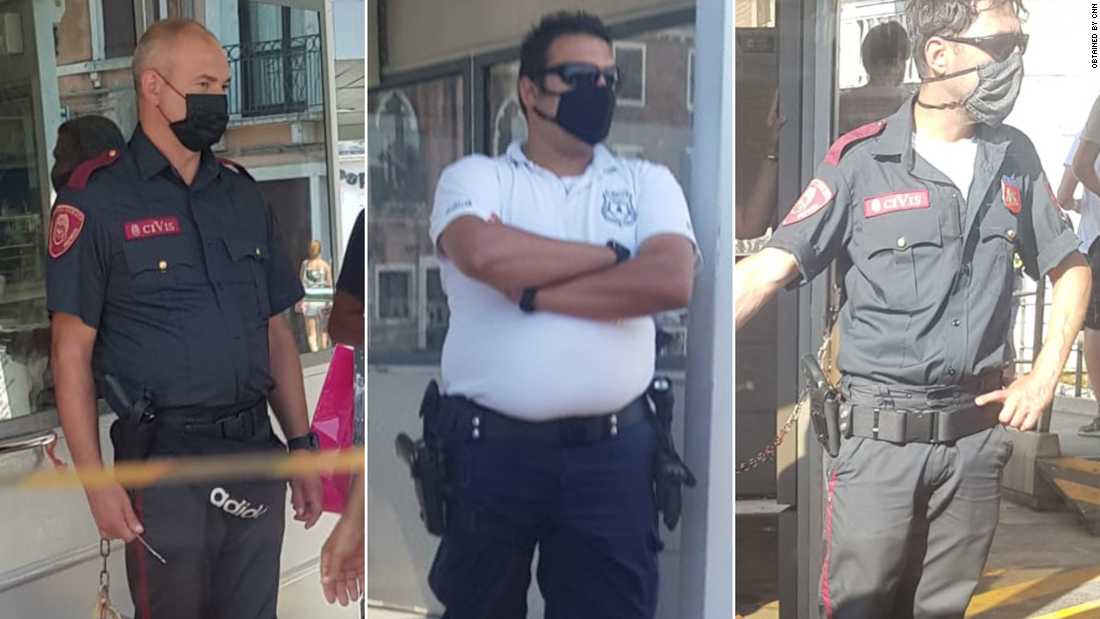 (CNN) — Deserted streets, silent canals and eerily empty bridges. Photos of an empty Venice during lockdown sent social media wild, with many people vowing to flock to the city as soon as borders reopened.

And they seem to be true to their word. This summer, with the borders open to US citizens, plus Europeans keen to travel by car to their vacation destinations, the tourists are back in Venice.

And so are the lines.

On weekends and holidays, the lines to and from popular destinations in the city can be hundreds strong. This week, up to 80,000 visitors a day have poured into the city of 50,000 inhabitants, according to local media.

In fact, the long lines — and tensions sparked in them — have become such an issue that this summer, armed guards have been brought in to control the crowds.

Since late June, the guards have been stationed at key vaporetto (waterbus) stops on the busiest days.

Pistols on the pontoons

Armed guards are now stationed at vaporetto stops across the city.

Tensions had been riding high earlier in the summer, as a sudden influx of tourists hit the city, which had gotten used to relatively low visitor numbers since the pandemic began.

Passenger numbers on public transport are still capped in Italy — currently, government law says that in “white zone” regions (which Veneto currently is) vehicles can take up to 80% of capacity, up from 50%,which it was until June as a “yellow zone.”

Back then, with tourists returning into the city and the lines growing ever bigger, there were regular skirmishes between angry locals and the boat personnel, who, attempting to stick to capacity regulations, would not allow them to board.

“Users take out [their frustration] on the staff,” Danilo Scattolin, legal representative for the Veneto region of the Sindacato Generale di Base (SGB) trade union, which represents some of the ACTV (public transport) workers, told CNN.

“Some workers have been physically attacked. There is spitting, insulting, even punching.”

The guards were brought in at the request of the workers to man key stops in the floating city. CNN understands that although they are not obliged to carry weapons, those who are licensed to do so may bring them to work — and many are opting to.

Over the past few weeks, CNN has been sent photos by locals of the armed guards at vaporetto stops around the city, including Ca’ d’Oro and Rialto on the Grand Canal, San Zaccaria (for St. Mark’s Square), Piazzale Roma (the gateway to the Italian mainland) and San Basilio, in the Dorsoduro district. They have also been seen on the islands of Murano and Lido — both the scenes of hundreds-strong lines of people attempting to board the boats.

CNN has also witnessed them first hand at the stop beneath the iconic Rialto Bridge.

“It’s jarring to see people walking around with guns,” Caroline Jones, a resident, told CNN. She calls the presence of the armed guards “the only mitigation” of the crowds… “to prevent fights breaking out.”

“But a guard is probably a good idea when there are too many people getting angry at too few spaces on the boats,” she added.

People packing out the ferries is a common sight in summer — but this summer, locals think it could be worse.

Representatives for both Azienda del Consorzio Trasporti Veneziani (ACTV), the city’s public transport company, and the Venice authorities declined to answer questions for this article.

But Scattolin said the problems are not confined to the water; it is happening with the buses on the mainland too.

“A few days ago, a bus was on the bridge [to Venice from the mainland] in a queue and a passenger lost it, because he thought the driver should have chosen the other lane. He was swearing at him until they arrived at Piazzale Roma.

“It’s almost always locals who have this reaction, and it’s not acceptable,” he said, adding that the public’s “aggression” meant that “something” was needed in terms of supervision.

But he added that for the union, positioning guards only at busy stations during peak hours doesn’t solve the issue.

“If there’s no other remedy, they should be at every stop — what doesn’t happen on the pontoon where the guards are can happen on the next.”

At peak times, the lines can be hundreds deep.

The arrival of the guards comes at a period when lines to board vessels can be hundreds deep at peak times, and many residents CNN spoke to think the situation — which has always seen long lines to the islands and beaches in tourist season — is worse than pre-pandemic times.

In fact, they have a point — although the figure of 50,000 visitors per day pouring into a city of 50,000 inhabitants is commonly cited, data from the city’s new Smart Control Room which tracks visitor activity in Venice, shows that 80,000 a day have been flooding the city this week, outnumbering the local residents by over 50% (as reported by local media).
On Thursday, July 19, all parking spaces in the city were filled by 12.30 p.m., leading the local authorities to tweet that visitors should park on the mainland.

Once in the city, many visitors want to visit the same places. At peak times, the line for the popular number 12 line which goes to the islands of Murano, Burano and Torcello can stretch a couple of hundred meters.

Pictures taken by residents and ACTV employees show the same hundreds-strong lines on Burano and Murano for the return journey.

Massimiliano Bovo, who runs the famed Gatto Nero restaurant on Burano — the island in the north lagoon that’s a 45-minute ferry ride from Venice proper — is at his wits’ end.

“If someone has a reservation at my restaurant, or any restaurant on the islands, at, say 1.30 p.m. and they plan to take the 12.50 p.m. boat from Venice — if they arrive and there’s a 500 meter line, they’ll never get that boat. Often they miss it, they miss their reservation, I lose out too — all because [the ferry company] doesn’t know how to cope.

“These poor tourists are [queuing] in the midday sun without any water. This isn’t Venice; this isn’t tourism.”

Bovo suggested that there could be better planning, laying on extra boats at peak times.

“There are CCTV cameras — if you see 500 people waiting for a boat, it should be automatic to send an extra one. It’s 2021, lots of tickets are bought online, so the operators can see how many have been sold, but they never put more boats on.

“Tourists often cross with commuters who have to get back to their homes. But there’s disinterest from ACTV about support. Putting on fewer boats means they save on fuel.”

Queues aren’t the only issue — a recent ordinance to stop drainage into the lagoon means that the bathrooms on the boats plying longer routes have been closed.

Earlier this month, a local Facebook group for commuters into Venice, which usually posts pictures of long lines, published a photo of what appeared to be human excrement on a ferry.

“We condemn incivility but understand that with 40 minutes [on the boat] without counting the time in line for embarkation it can happen that one has impelling ‘needs’,” they wrote.

Lines on Murano can stretch down the street at busy times.

Thea Hawlin, who works on Murano, told CNN that long lines are nothing new. “It’s definitely not a Covid problem — it’s been like this for a long time,” she said.

In the past, she added, “locals would just cut the line and go through the exit.

“Now it’s starting to get back to that point, but with Covid it’s more stressful… and the staff aren’t prepared for crowd control.

“Sometimes it’s like a stampede — the equivalent of the rush hour [London] Tube. Several boats can go by and you won’t get a space.

“One time they closed the metal barrier on the boat, and people were literally jumping over it.”

Hawlin says that things have improved since the “crazy” opening week of the architecture Biennale, in late May.

Not everyone thinks the situation is unbearable, however. Gabriele Gaggiato, who owns a bar-kiosk on the famous Riva degli Schiavoni waterfront, points out that the worst queues are at weekends and certain times of day. “Of course there are lines returning from the beach at 4 p.m.,” he says. “Come back at midday and it’s fine.”

He added that some boats that look full to bursting, with passengers packed like sardines on the outer decks, often have seating and standing room indoors.

There’s little social distancing on this boat to Burano.

Of course, with the Delta variant spreading through the world, long lines and overcrowding are not things anyone wants to be dealing with.

Hawlin says that “social distancing is a far off dream” in the lines waiting for the boats.

Italy requires masks to be worn on public transport and inside spaces, but has relaxed its outdoor mask mandate.

“The queues outside are impossible to police — you don’t have to wear a mask in the open so it feels like lots of people keep it off till the last possible moment, regardless of how many people there are around,” she said.

“It’s a terrible image,” said Scattolin. “Masses of people in line is unacceptable any time, but these queues are dangerous in a pandemic.

“Venice always had a decent [public transport] service. Now tourists queue for hours waiting for a boat that arrives late. They won’t have a good memory of Venice.”

Tourism went from zero to 100 around June, when this photo was taken.

The crowds have come at a time of tension between the authorities and the trade unions representing the public transport workers, who last week voted against a new contract with altered working conditions.

Yet the long lines and crowded boats cannot be denied.

CNN has been sent dozens of photos of crowds waiting at vaporetto stops by concerned ACTV employees, which correlate with other photos taken by residents, and pictures circulating on social media.

While no official from ACTV would speak, CNN has spoken to more than 20 employees, all of whom have speculated that one of the reasons for the long lines is that they are still running a winter schedule, without the seasonal staff who would usually work the summer months.

Neither ACTV nor the Venice authorities would say whether this was the case.

But CNN commissioned an analysis of timetables from key routes for tourists this summer, compared to the last three summers — and compared to last winter, when the city was largely in lockdown.

According to the data, there appears to be little difference between the service on offer during the winter (when visitor numbers were at rock bottom) and now, with up to 80,000 tourists a day.

Looking at routes to the islands and the beaches, the data suggests that in many cases, the capacity is more or less the same not only as last winter, but also summer 2020, when Italy’s borders were semi-closed.

In the case of the boats plying the Grand Canal — the most iconic routes — the frequency hasn’t changed since January, and is less than it was mid-pandemic in summer 2020.

One Venetian CNN spoke to moves about on foot rather than taking the vaporetto, but thinks it’s worse this year: “My impression is that in past years it was a sporadic thing linked to huge tourist influxes for special occasions such as bank holidays, while this summer it’s become more frequent,” they say.

And the resident says that it doesn’t help already fractious relations between locals and tourists.

“I think it’s looked on badly because when there are more tourists around, or in a time of crisis like this, it creates a lot of frustration and anger amongst the residents.

“It’s one of many hardships Venetians live with, like the crowding of streets and the trash dumped all over the city [by tourists].”