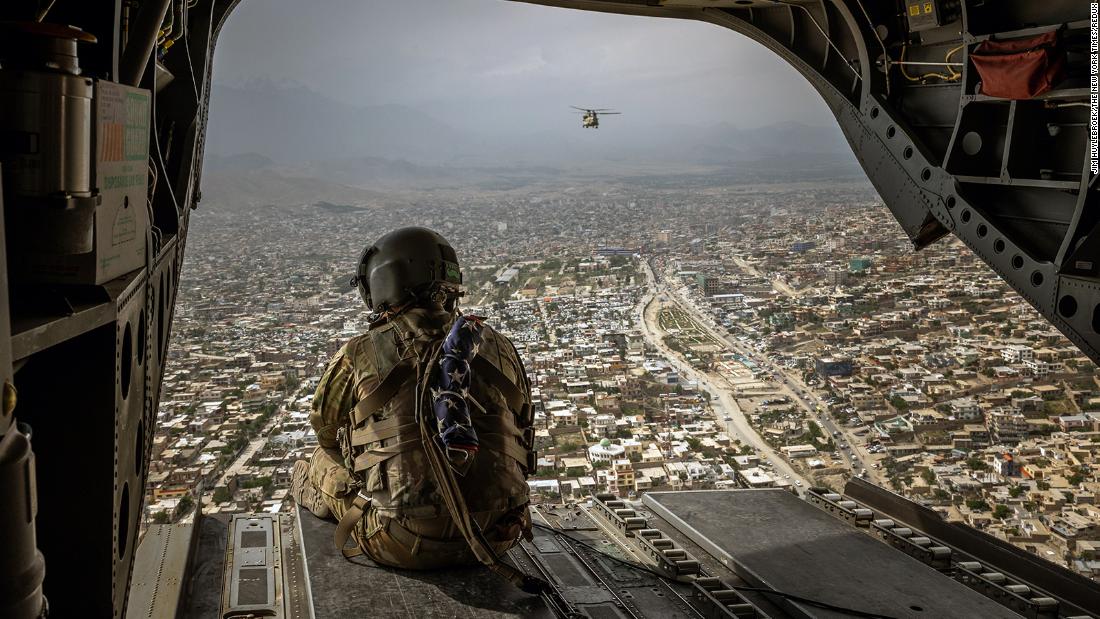 Now, many US veterans are expressing frustration and disappointment with how quickly the Taliban has taken hold after nearly 20 years of war.

“And now I’m wondering if the last 20 years were completely pointless and in vain,” he told CNN. “All the friends I lost in Afghanistan — what were their deaths for? What was their sacrifice for if this was the end state?”

“I don’t think I did anything worthwhile at this point,” he told CNN.

But for veterans like Zeller, the way America’s longest war has come to an end is only part of it: They’re also worried for the Afghan interpreters, translators and support personnel who spent years working with the United States at great risk to themselves and their families.
Zeller deployed to Afghanistan in 2008 and served as an embedded combat adviser to Afghan security forces. On his 14th day in the country, Zeller’s Afghan interpreter, Janis Shinwari, saved his life, killing two Taliban fighters who were about to kill him.
To repay his life debt, Zeller later helped Shinwari get a visa and come to the United States. Realizing how difficult the process was, Zeller and Shinwari started No One Left Behind, an organization that helps bring interpreters who worked with US troops to America.
Zeller has dedicated years to this work, including in recent months urging US officials to do more to ensure America’s Afghan allies are safely evacuated.

But now, watching Afghanistan fall into the hands of the Taliban as thousands of Afghan allies clamber for a way out, Zeller says, “I feel like a complete and total failure.”

Vets, families wonder about the sacrifice

There’s a wide range of opinions among Afghanistan war veterans about the withdrawal, said Tom Porter, an Afghanistan veteran and the executive vice president for government relations at Iraq and Afghanistan Veterans of America (IAVA). Stressing he doesn’t speak for everyone, Porter said some veterans feel the withdrawal was overdue while others believe the United States should have stayed to prevent any violence.

“But the vast majority of veterans I’m hearing from have great concern for the veterans that have sacrificed so much and the families that are Gold Star families that lost their sons and their husbands and their fathers and mothers and other family members over the last 20 years,” Porter said.

“They are wondering, was their loved ones’ service worth it?”

The images coming out of Afghanistan are quickly building a narrative, he said, that is going to shape veterans’ views about the past 20 years.

Gerald Keen, who served in Afghanistan, told CNN’s Pamela Brown he knew this time would come. But he disagrees with the way the withdrawal has unfolded, believing American soldiers should not be sent back to do a job he feels should have been done prior to the closure of Bagram Airfield.

US Defense Secretary Lloyd Austin approved the deployment of 1,000 more US troops to Afghanistan, a defense official told CNN on Sunday, for a total of 6,000 US troops expected to be in country.

“Now we’ve got to send soldiers back in harm’s way to help evacuate the embassies and these interpreters who fought side by side with us every day,” Keen said.

Much of veterans’ anxiety is tied to the effort of getting out those who helped the United States at risk to their families’ lives, said Jeremy Butler, IAVA’s chief executive.

The US State Department has said there are some 20,000 Afghans who have applied for a Special Immigrant Visa (SIV) to be able to come to the United States. As of Friday, 1,200 Afghans and their families had been evacuated to America as part of the administration’s “Operation Allies Refuge,” and administration officials said they would accelerate efforts to get the applicants and their families out of Afghanistan and to the United States or a third country.

Even with the accelerated pace of SIV relocation, there are tens of thousands of other Afghans who worked alongside the United States who either are stuck in the pipeline or do not qualify for the program and will need to pursue other ways out, such as the administration’s new Afghan refugee designation.

It’s about keeping promises made, Butler said, not just by the US government, but also by veterans who are now back home and who had echoed that promise to their Afghan colleagues and allies.

“Many of our veterans were reiterating and explaining because of this belief in the system we put forth. … It’s very personal, because (the veterans) were making that promise to them,” he said.

Said Noor spent 17 years serving the United States as an Afghan interpreter. He emigrated from Afghanistan and joined the US Army and said he’s surprised at how quickly the Taliban has gained ground. But right now, the Army veteran is struggling to get his own family out of Afghanistan, saying they are calling him, looking for help.

So far his effort has been in vain, Noor said, acknowledging that if it’s this difficult for him as a US citizen to get his family out, he can’t imagine what it’s like for non-citizens.

“If I put myself in the shoes of the other interpreters who do not have any US contact, or the local interpreters in Afghanistan, their life is in as much danger as my family’s life is,” he said. “And they have no way out of the country.”

‘These are people we relied on’

Kristen Rouse served three tours in Afghanistan, spending a combined 31 months there. But asked whether she felt the past 20 years had been worth it, Rouse, the president of the New York City Veterans Alliance, told CNN, “It’s a really hard question to answer.”

She said she felt troops should have been brought home long ago, but she compared the way the withdrawal has been executed with the United States yanking a carpet out from underneath the feet of Afghan allies.

An interpreter she worked with — a husband and father of five — is currently in hiding, Rouse said, unable to overcome barriers in the visa program. Rouse said she was one of many veterans messaging with Afghan allies who can’t get out.

“It is gut-wrenching,” she said. “These are people we relied on, that we promised that we wouldn’t leave them behind. And we’ve abandoned them through bureaucracy and through failing to have a plan to get them out. And they’re being hunted. They’re being hunted and murdered.”

Zeller told CNN he agreed with ending the war, saying it was shameful that it had been allowed to go on long enough that his children could have fought in it. But said he’s heartbroken for the people he’s spent 10 years trying to help.

“I fear we’re going to leave Afghanistan the way we left Bagram: in the middle of the night, without telling our Afghan friends,” he said.

There are some stories of hope: Keen grew close to the Afghan interpreter he worked with, Rahim Haidary, after they met in Afghanistan in 2016. Since then, Gerald and his wife, Lynette, have fostered a relationship with Haidary and his family. They think of him as a son, and Haidary’s children know Lynette and Gerald as grandma and papa, the couple told CNN’s Pamela Brown.

They have been working to get Haidary and his family to the United States through the SIV application program, with the help of the Association of Wartime Allies, they said. But Lynette said the process is taking years.

The Keens have some relief: The family was able to evacuate to Canada, and last Sunday, Haidary and his family landed in Toronto, where they’re undergoing a two-week quarantine, the couple said.

Keen said he is grateful but that Haidary is only “halfway home,” adding, “I hope this is a continuation to the US and not a destination.”