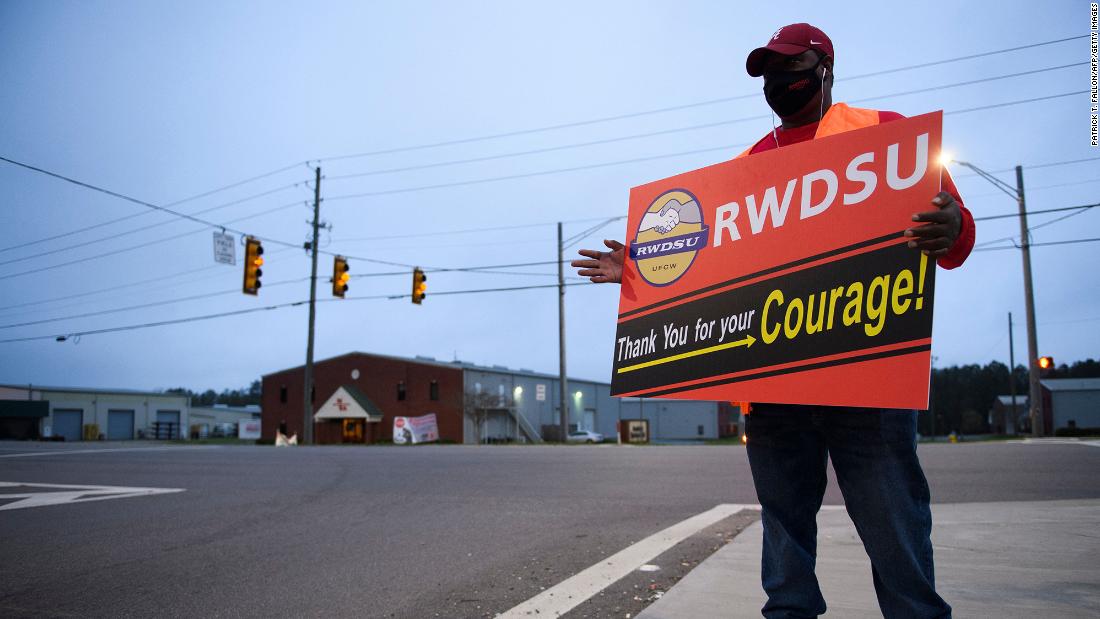 In Joe Biden, organized labor has the most pro-union president since at least Lyndon Johnson, or perhaps ever, depending upon who you ask.

And unions are actually more popular now than they’ve been since their heyday. A survey by Gallup released last week found that 68% of respondents have a positive view of unions — the best reading for that question dating back to 1965, and up from only 48% in 2009. Younger workers are even bigger backers of unions, with 77% of those 34 and younger having a positive view.

“I think because of the pandemic, the country has taken a second look at unions and they like what they see,” said Tim Schlittner, communications director for the AFL-CIO union federation. “Workers are finding power in each other. And this is a moment of great opportunity for the labor movement to build on this momentum and grow our ranks.”

There is also a generally more positive environment for workers today, with more job openings than job candidates resulting in rising wages in many sectors of the economy. But despite that, the very union-friendly administration and growing popularity, 2021 was once again a tough year for the nation’s unions — which represent only a small sliver of US workers and are having trouble growing their numbers.

“US unions are in a much weaker position than they were in the 50s, 60s, 70s,” said Alexander Colvin, dean of Cornell University’s Industrial and Labor Relations School. “There’s opportunities now to revitalize, but it’s an opportunity, not a reality yet.”

US union membership near record low

Unions ended 2020 with less than 11% of workers in their ranks, roughly half the share of US workers than in 1983 when the Labor Department started tracking the figure.

And although that percentage was up slightly from a year earlier, that’s only because non-union workers lost their jobs at a slightly higher rate during the pandemic than unionized workers. The number of union members actually fell slightly in 2020, the most recent year for which data is available.

The picture is somewhat better in the public sector, where roughly one-of-three government workers, such as teachers, police or fire fighters, are members of a union. But in the private sector only 6% of workers are unionized. And changing that in a meaningful way is obviously going to be difficult.

The biggest recent setback was likely the failed attempt to win an organizing election at an Amazon warehouse in Alabama by the Retail, Wholesale and Department Store Union. Less than 30% of employees at the warehouse voted earlier this year to be represented by the union.

Union supporters claim this is a sign that the rules are stacked against them in attempts to organize businesses.

“There is a much higher share of workers who would want a union in their work place,” said Celine McNicholas, director of government affairs at the Economic Policy Institute, a liberal think tank that gets 17% of its financial support from labor unions. “What the Amazon (AMZN) vote shows is how broken the system is.”

Unions are making a major push for a reform of labor laws through the Protecting the Right to Organize Act, or PRO Act, that union supporters say will level the playing field on representation votes. The legislation was recently renamed to add the name of Richard Trumka, the outspoken and charismatic president of the AFL-CIO who died a month ago.

The legislation would allow for fines of up to $50,000 against employers who are found to have violated employees’ rights during an organizing campaign, such as firing them for supporting an organizing effort. The bill also allows the National Labor Relations Board (NLRB) to order an employer to recognize a union if it finds that management interfered with the election and a majority of employees have signed cards indicating they support a union.

But despite the fact that the legislation has passed the House and is co-sponsored by nearly all the Democrats in the Senate, it will be difficult to get it passed without eliminating the filibuster. Supporters are more hopeful parts of the bill can be included in budget measures that require only a simple majority of the Senate to pass.

Opponents of the measure say despite the difficulty of passing the law, they are concerned that parts of the legislation will come to pass in the Democrat-controlled Congress. Mark Mix, president of the National Right to Work Legal Defense Foundation, which fights efforts to require employees to pay union dues if they object to doing so, said despite unions representing only a tiny minority of workers, they still wield tremendous power in Washington.

“They have power out of all proportion to their numbers,” he said. “They’re a political force. To say the deck is stacked against them is just not true. They have the Democrats in their back pocket.”

What Biden’s win meant for unions

The wins that President Biden has provided to unions have been low-profile but important, including putting union friendly appointees in charge of the NLRB.

Among the decisions the board will make soon is whether or not there will be a new unionization vote at the Amazon warehouse in Alabama. Last month an NLRB hearing officer agreed with union objections to several of the actions that Amazon management took during the previous vote, and recommended a new election.

Among the first day moves that Biden made upon taking office on January 20 was firing Peter Robb as general counsel of the NLRB, a powerful position little known outside of labor law circles.

Robb, a longtime management-side lawyer, most notably served as the lead attorney in the watershed case after President Ronald Reagan fired the striking members of the Professional Air Traffic Controllers Organization in 1981, a move widely seen as a catalyst for management assault on unions.

Upon being named general counsel by President Donald Trump in 2017, Robb said he was committed not only to protecting the rights of employees to engage in union activities, but also the “rights of employees to refrain from such activities.” Union opponents such as the National Right to Work Legal Defense Foundation saw him as their champion. His replacement, Jennifer Abruzzo, had previously been a union lawyer.

Biden has since named additional members to the NLRB, giving Democrats control of the board.

“There’s a lot of stuff decided by the NLRB in terms of how labor law works that doesn’t get a lot of attention,” said Colvin. “It makes a big difference when you go from a pro-management to pro-union.”

Opposition to Biden among rank-and-file

Despite the alliance between union leadership and many Democrats, 40% of voters from union households voted for Trump in the 2020 election, according to polling from Roper.

“That chasm between union officials and their agenda and the agenda of rank-and-file across the country are getting wider and wider,” Mix said.