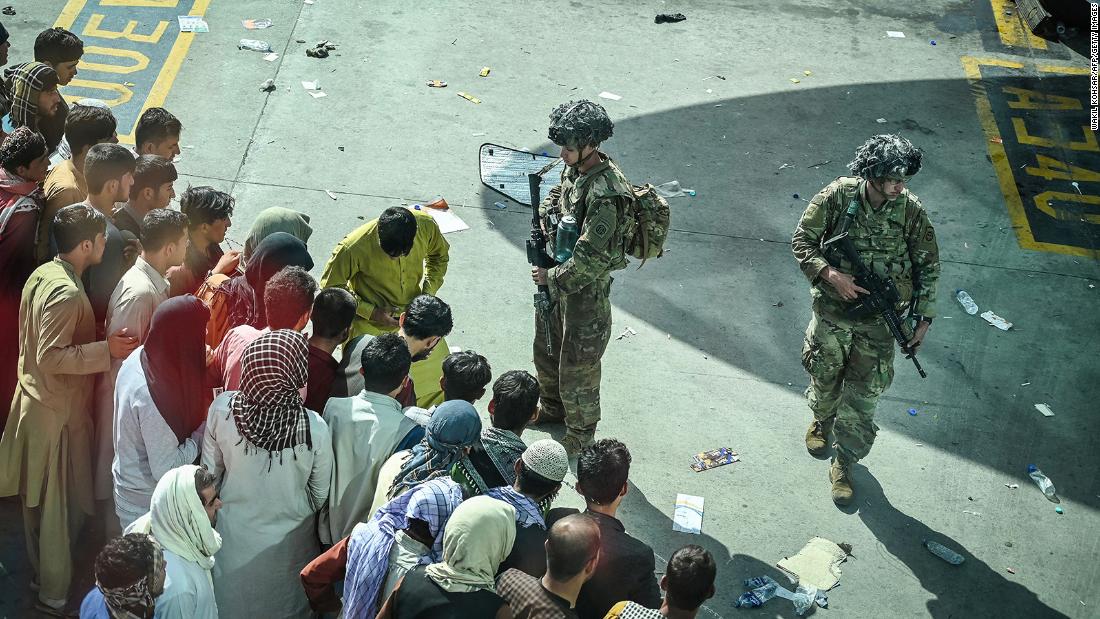 In recent days, administration officials worked overtime to pull lists of names of special immigrant visa applicants to push through systems and get security checks cleared, and over the course of the week, solicitations went out to the DHS workforce to assist in processing Afghans.

Weekly visa issuance increased significantly from March to early August, according to the State Department. But despite months of internal discussions over the process, there was a lack of decision making on how best to handle and expedite visas, an administration official said. Now, it’s a scramble.

The visa program was established in 2009 specifically for Afghan citizens, along with their spouses and unmarried children under 21, who work for the US government in Afghanistan, and who face threats for their allegiance to the US. While Afghans are thoroughly vetted before working alongside US forces, they still go through a cumbersome and meticulous process riddled with checks before obtaining a visa to come to the US.

That process is now being tested in a tense situation, requiring a surge of resources to comb through the thousands of people fleeing Afghanistan who face reprisals, even death, for working for the US.

It’s an “all hands on deck type of approach,” a Homeland Security official told CNN, adding that personnel have been asked to assist overseas.

President Joe Biden said the US is looking at evacuating between 50,000 and 65,000 Afghans in total, a figure that includes the Afghan visa and refugee applicants plus their families. There were 17,000 SIV applicants in the pipeline when Biden took office, according to the State Department, and no interviews had taken place in Kabul since March 2020 due to the coronavirus pandemic. Interviews resumed in Kabul in early February, but were forced to temporarily shut down again this summer due to a coronavirus outbreak and now remain in flux with the rapidly changing security situation on the ground.

A group of US diplomats wrote an internal cable to Secretary of State Antony Blinken in mid-July laying out how the State Department could take more swift action to process Afghans who assisted the United States and get them out of Afghanistan as they watched the situation in the country deteriorate and feared a catastrophe.

The classified cable, signed by more than a dozen US diplomats, urged specific steps to be taken such as starting a biometric enrollment program of the Afghans applying for SIVs or refugee status ahead of the time of the evacuation, as to not waste time when the evacuation began, in anticipation of the collapse of the Afghan government as the US withdrew.

Since the fall of Afghanistan, lists of names have been shared with federal partners to run through the system, though bottlenecks can occur if there’s a red flag that requires surging personnel to clear or confirm, the official added.

The vetting process has progressed over time, from individual agencies working in silos to a more holistic effort engaging federal agencies and gathering information from the Department of Defense, State Department, FBI, intelligence community and DHS.

“We’re much better at identifying potential threats with better information sharing and better analytical tools applied to that assessment,” a former Homeland Security official told CNN. But the process also requires manpower to resolve any issues that may arise and the urgent nature of the situation can pose a challenge.

“Anytime something’s happening in a pressure cooker you’ll be pushed to accelerate processes that are sometimes deliberate for a reason because you can miss something,” the former official said.

“It’s an intensely labor-intensive process,” another former Homeland Security official echoed. Part of that process is looking up information and trying to resolve things that are “inherently ambiguous” — for example, did a visa applicant talk to Taliban members because it was part of their job or were they betraying the US, the former official said.

“That takes a lot of manual checking. It takes, ideally, going back to the employer at the time trying to find the major or the captain or the section chief in the embassy or the USAID contractor,” the former official added. “All of this has to be de-bottlenecked in a hurry.”

There are ongoing conversations at the department about screening and vetting—”how not to let anyone slip in that isn’t supposed to slip in,” a DHS official said.

Special immigrant visas are one legal avenue for Afghans to come to the US. State Department spokesperson Ned Price said the administration is also “urgently working on efforts to assist eligible Afghans under the Afghan Special Immigrant Visa program, Priority 1 (P-1) and Priority 2 (P-2) referrals to the U.S. Refugee Admissions Program, and humanitarian parole.”

But another major issue right now is the rush of Afghans who are trying to apply for these various programs, and did not do so previously because they didn’t know the Taliban would overrun the country so quickly, or at all. State Department officials have created a database to add new people into the system but they are facing a shortage of personnel to enter in the Afghans’ information, which is creating a major bottleneck, explained two State Department officials familiar with the situation.

In addition to getting Afghans on the list and getting them started in the vetting process, the Afghans also need to get out of the country before it is too late.

Some people with proper credentials have reported challenges getting through the gates at the Kabul airport despite being directed to go there. Pentagon spokesperson John Kirby said the US has “repeatedly communicated” to the Taliban what proper credentials are and what they look like.

“To the degree that it’s not working as it’s supposed to, I can assure you that our military commanders, in this case Admiral Vasley who is predominantly managing this communication, will continue to take that up,” Kirby added.

For those who arrive without credentials — a possibility for a myriad of reasons including fear of the Taliban — a “more robust” effort is needed to validate who an individual is, another DHS official told CNN. “That’s the challenge really,” the official said.

Flights are destined to a handful of locations, including Qatar and Kuwait. Price on Thursday said the State Department expects 20 flights to depart Afghanistan Thursday night, citing the Defense Department, and the operation “will continue at as fast a clip as we can possibly manage.”

Consular officers are also on site. Price said that there are 6,000 people at the airport in Kabul who have been “fully processed by our consular team and will soon board planes.”

Customs and Border Protection sent additional personnel to Doha, Qatar, on Wednesday to help assist in the processing of people leaving Afghanistan en route to the US, according to a Homeland Security spokesperson.

Agency officials are in Doha working on processing, screening and vetting Afghan Special Immigrant Visa applicants and other eligible vulnerable Afghan nationals before they travel to the US, the spokesperson said.

Volunteer personnel will serve a temporary detail in Doha and/or Kuwait City to assist State Department and Defense Department personnel, according to a memo sent to headquarters and field leadership. Deployments are expected to last 30 days with possible 30-day extensions, the memo issued Monday says.

“Everyone is being vetted at some point, at least once or twice,” the administration official said.

Becca Heller, executive director at the International Refugee Assistance Project, told reporters Wednesday that some of the organization’s clients in Afghanistan were able to get on planes.

“One of those clients we believe is going to Denmark on a plane operated by Denmark because they happened to have a Danish military supervisor in the past. One got on a plane run by the US military, didn’t even know where it was going but just got on the plane. It took them hours to get into the airport, during which they were also teargassed and shot at. And then the third client got on a plane that they know was bound for Qatar,” Heller said.

Heller said other clients, including SIV applicants, have received notices that they should report to the airport for evacuation flights.

In recent days, administration officials have said they will accelerate efforts to relocate SIV applicants as well as other vulnerable Afghans. In some cases, Afghans will be housed at military bases in the United States as they wait for final approval of their visas.

Secretary of Defense Lloyd Austin authorized the use of Fort Bliss in Texas and Fort McCoy in Wisconsin to shelter SIV applicants, their families, “and other at risk individuals,” Kirby said this week. Fort Lee will also continue to be used.

CNN’s Jennifer Hansler and Kylie Atwood contributed to this report.