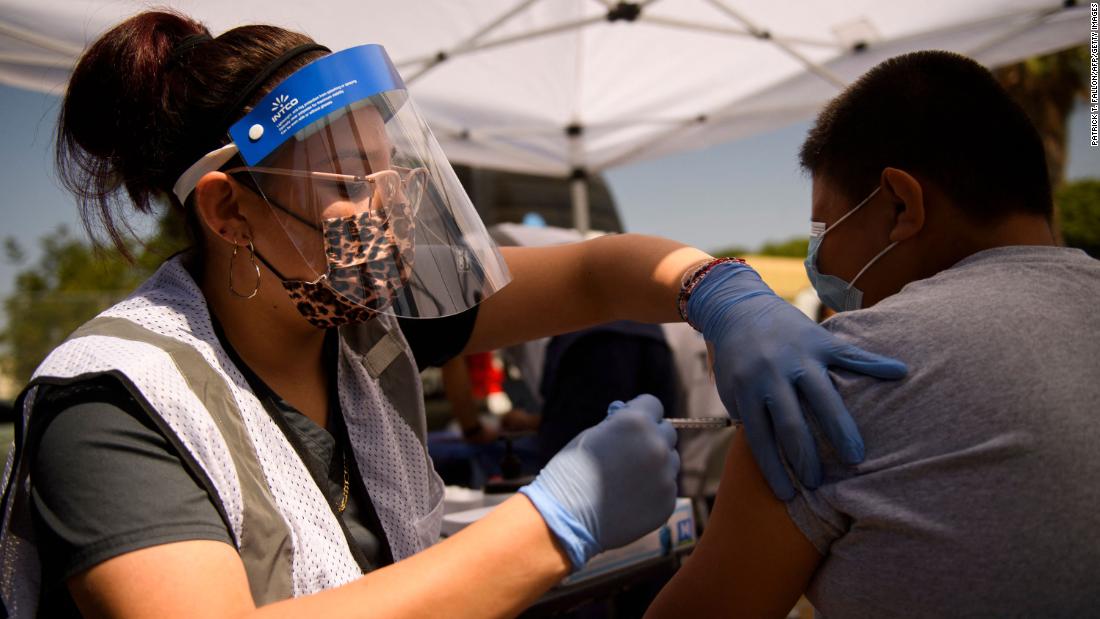 But still just over half of the total population is fully vaccinated, and 31.2% of the vaccine-eligible population remains unvaccinated.

The large swath of the population still unvaccinated is even more of a concern as cases rise. With an average of more than 116,600 new Covid-19 cases per day, it’s the highest in about six months, according to data from Johns Hopkins University.

And rates of hospitalizations and deaths have almost doubled in the past two weeks. More than 68,000 people are hospitalized with Covid-19, according to data from the Department of Health and Human Services

Vaccinations “are holding steady against even the Delta variant. The problem is we don’t have enough people vaccinated,” Frieden told CNN’s Wolf Blitzer. “Vaccination is our away through this pandemic, but we need to ramp up the numbers.”

The vaccines are even more effective than experts hoped for, Frieden said.

More than 99.99% of people who are fully vaccinated against Covid-19 have not had a breakthrough case resulting in hospitalization or death, according to a CNN analysis of data from the CDC.

But as effective as vaccines are, Frieden said that with too low of rates, vaccination may need to be paired with mask mandates.

“What we know really well is that vaccines work and masks work,” he said. “Doubling the protection is particularly important because we have this doubly infectious variant of Delta.

Expert calls for vaccine mandate among adolescents going to school

Concerns over the rise in cases are growing for many as parents begin to send their children to school for the new year.

On August 6, an Arkansas judge temporarily blocked the enforcement of the state’s law banning mask mandates in schools, in response to two lawsuits — one from a school district, and one from parents — who want schools to be able to require masks if they so choose.

School districts are allowed to enforce mask mandates while the suit continues.

Florida Gov. Ron DeSantis escalated the fight in the state over mask mandates Monday when his office said that the state board of education could move to withhold the salaries of superintendents and school board members who disregard the governor’s executive order that effectively prohibits mask mandates in school districts.

Florida Superintendent for Alachua Public Schools, Dr. Carlee Simon, wrote in a Washington Post op-ed that her district is defying the ban. She told CNN’s Don Lemon that DeSantis is not taking the coronavirus situation seriously enough.

One health expert said that vaccine mandates for children 12 to 17 may be necessary as the new school year begins.

Speaking about the rise in pediatric ICU admissions in certain parts of the country, Dr. Peter Hotez, a vaccinologist and dean of the National School of Tropical Medicine at Baylor College of Medicine, told CNN’s Wolf Blitzer that “schools are going to be an accelerant” for child infections without universal masking.

“It’s not even going to be enough to have mask mandates in the schools,” he said. “We need all of the adolescents vaccinated, and really we need to move towards vaccine mandates for the 12 to 17-year-olds in the schools.”

Some states only have a quarter of the adolescent population vaccinated, Hotez said, so both mask and an increase in vaccination rates among students will be important to containing in-school spread.

“If we’re going to give our fighting chance to have a successful school year, we’re going to need everyone who is vaccine eligible to get vaccinated and everybody masked,” Hotez said.

Some health experts have pointed to vaccine and mask mandates as possible solutions for rising cases. And while some local leaders are moving toward those efforts, others are rejecting them.

On Monday, Washington joined many states that have announced requirements for state employees to be vaccinated against the virus.

The mandate by Gov. Jay Inslee would cover 60,000 state employees and 400,00 health workers plus thousands of contractors. Under the mandate, these workers are required to be vaccinated in places where the state is doing business.

Some local leaders are pushing back against Texas’ anti-mask mandate policy, as many hospitals in the state are being overwhelmed with Covid-19 cases.

As of Monday night, more than 9,000 people statewide are hospitalized with Covid-19, according to Texas’ Department of State Health Services. Throughout the state, 394 ICU beds are currently available.

Last month, Abbott issued an executive order with language that no governmental entity, including school districts, could require mask-wearing.

On Monday, Dallas County Judge Clay Jenkins asked a Texas Court for a temporary restraining order on the ban on mask mandates.

“Governor Abbott has decided on a course of action that prohibits face-covering mandates on a state-wide basis. Irrespective of his motivations or the dangerous nature of such a decision, it is within his legislatively-delegated authority to decide to mandate face coverings or decline to do so,” Jenkins wrote in his filing on Monday. “But the Governor has also attempted to prohibit local elected officials from making a different decision, in response to local conditions, to protect their own communities.”

West Virginia Gov. Jim Justice told his constituents “you’re taking a helluva risk if you’re not vaccinated,” but added that he “absolutely” doesn’t want to mandate anything like masks or vaccines.

Justice said if things continue as they are, a mask mandate might have to come back at some level.