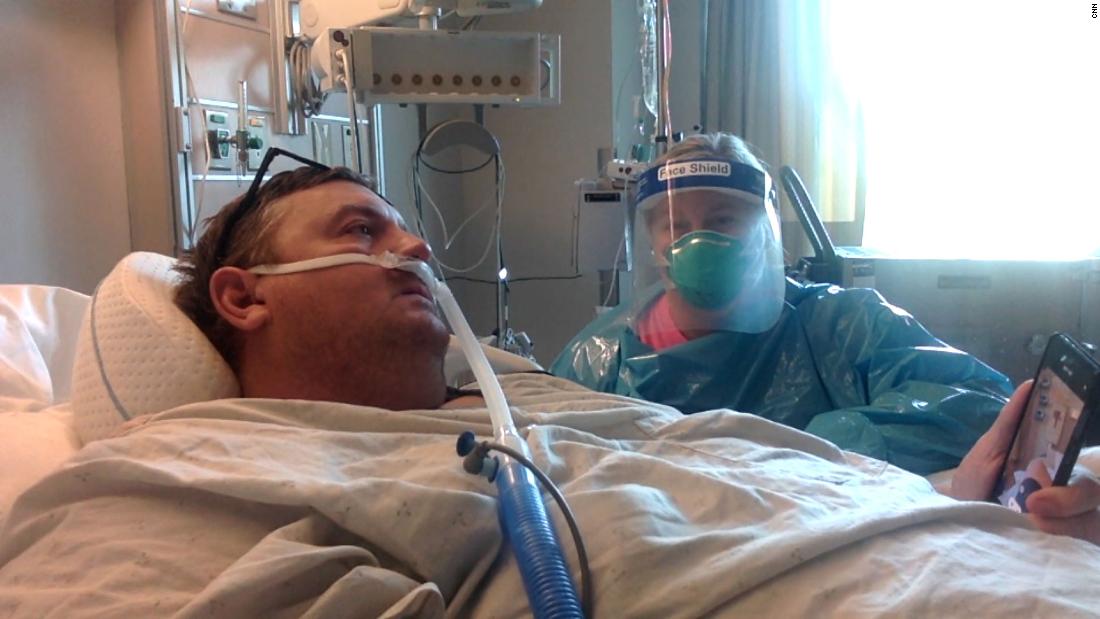 He really regrets not getting vaccinated. And while he hopes he’s turned a corner, for a very scary stretch, he thought he needed to make arrangements in case he died.

The father of several children has been in a hospital in Bristol since late July, and has recording a video diary of sorts from his room, documenting a startling roller coaster of declines and improvement.

“I messed up big time, guys,” he said through an oxygen mask in one video posted to Facebook on Wednesday. “I didn’t get the vaccine … I made a mistake, I admit it.”

In his first couple videos in July, he was describing his illness in full, uninterrupted sentences. By July 31, he was talking only a few words at a time between strained breaths.

By Tuesday, he lying in bed, struggling to talk about whether he and his wife would let hospital staff put him on a ventilator if needed.

That night appeared to be his darkest yet, because by Wednesday, he was recalling a difficult thought that came to him: He might not live to see his 19-year-old daughter’s wedding, whenever it comes.

“I had to make a phone call (Tuesday night) to my 14-year-old son … and I had to ask for his permission that if I didn’t come home, that he would give my daughter away” on her wedding day, Campbell said in Wednesday’s video.

Why he says he didn’t get vaccinated

In two interviews with CNN from his hospital bed this week, Campbell and his wife, Kellie, detailed how coronavirus impacted their family this summer — and why they had initially chosen not to get vaccinated.

Virginia, like the rest of the US, has seen coronavirus cases spike as the highly contagious Delta variant became dominant in the country.

Kellie Campbell and their children contracted the virus — and all but one had symptoms, including cough, fever and dizziness.

“We’re all on the mend,” Kellie told CNN’s Don Lemon on Thursday night. “We didn’t have as severe symptoms as Travis.”

Lemon asked Travis Campbell why the family was not vaccinated.

“In early 2020, our daughter’s basketball team, they all got sick. They had the same symptoms as Covid,” Campbell answered. “So when Covid came up, everybody kind of automatically assumed that we had already had” the disease.

When cases declined this spring, “we just thought we had beat our odds,” he said.

He didn’t clarify whether he’d confirmed they’d contracted the disease in 2020. In any case, the US Centers for Disease Control and Prevention recommends that people be vaccinated regardless of whether they’d already had the disease.
And on Friday, the CDC published a study suggesting that people who got Covid-19 in 2020 and didn’t get a Covid-19 vaccine were more than twice as likely to be reinfected in May or June 2021, compared with people who also had Covid-19 but were later fully vaccinated.

Also influencing his decision: The Campbells live in a rural part of Virginia, so he didn’t feel like they interacted with enough people to put them at enough risk to decide to get vaccinated.

He regrets the decision now — and urges others to get the shots.

“I can’t breathe. I’m drowning. I feel like I’m a fish out of water,” Campbell told Lemon on Thursday.

“It was my fault,” he said. “I should have took my kids and my wife and went ahead and got vaccinated anyway. But I’m paying the price.

“And I just tell everybody and anybody: If you’re on the fence, I want you to take a very sharp evaluation of what your life means to you. And go get vaccinated, please, please.”

His daughter says he’s proud of him for his message

Travis Campbell was generally saying up to five words between breaths on Thursday night. When he talked to CNN the next morning, he could sometimes stretch that a little longer.

“I feel like I got another chance, and I hope that’s the case,” he told CNN’s “New Day” on Friday.

As for the daughter whose wedding he worried he’d miss, she said hearing him talk about that was heart-wrenching.

“You never want to hear your dad talk about not being there for those big moments in your life,” Madison Campbell told CNN in a live video interview from home.

“I just want to let him know how proud I am of him,” she said. “I think him going on Facebook, making those videos, it’s making a difference; it’s saving lives,” she said. “I couldn’t love (him) more.”

Travis Campbell, listening from his hospital bed, reacted tearfully and said he was grateful for his children.

“Vaccinations are so important, and I can do better as a parent, as a human, and I hope to God everybody else can, too,” he said.

CNN’s Michael Nedelman and Lauren Mascarenhas contributed to this report.