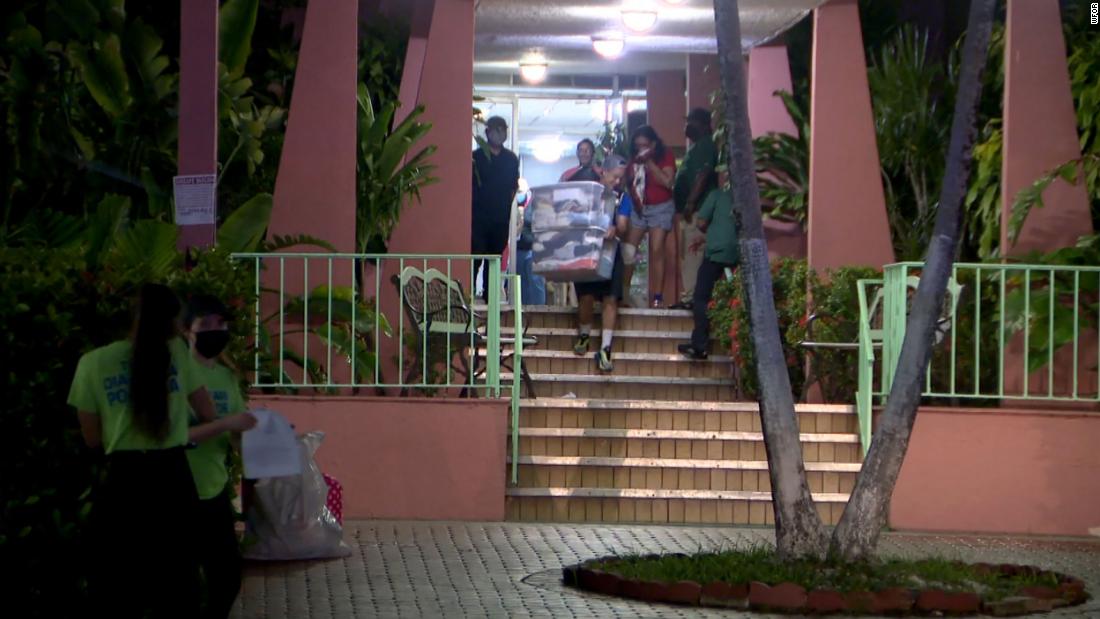 The 138-unit building is located on Seventh Street in the Flagami neighborhood, just south of Blue Lagoon and Miami International Airport, spokeswoman Stephanie Severino said. It’s about 6 miles west of Biscayne Bay, much farther inland than the Surfside building that is under investigation after experiencing a deadly collapse in June.
Buildings in the Miami area have come under increased scrutiny since June 24, when a huge portion of Champlain Towers South crumbled to the ground in Surfside, killing 98 people.
The Miami structure evacuated overnight received a notice of violations July 7, including a failure to obtain its 40-year recertification, the city said in a timeline about the property. The Surfside building was undergoing its 40-year recertification when it collapsed.

Residents in Miami met last month with officials who were concerned about the condition of their building, and officials performed an inspection July 27, the city said.

“As a result of the inspection, the detached elevated garage to the east was to be closed off due to structural concerns. The damaged columns within the first floor of the main structure required emergency shoring and a subsequent shoring plan to be immediately submitted. Plans for repairs would be required prior to any further work,” Severino said in a statement.

The city received a letter Thursday from an engineer saying residents could remain in the building during the emergency repairs, she said, but “no shoring plan or plans for the repairs were submitted to the City.”

An inspector examined the structural work being done Friday and issued an immediate stop work order. On Monday, “the Building Department leadership met with the Condo Association and the contracted Engineer to review the unpermitted work. The result of the assessment found the columns to be structurally insufficient,” Severino said.

This led to the building being “vacated and unsafe for current occupancy,” she said.

Residents were told they had until early Tuesday morning to clear out, according to CNN affiliate WFOR. They used plastic bins, suitcases and garbage bags to gather what they could before evacuating. Mya Castanedo described the situation as “very chaotic” and told the station residents are “not getting a final answer about what’s going on.”

The evacuated building is located between a gas station and an office building, and other condo towers and single-family residences stand nearby.

Buildings in the area get closer look

Issues with the building arose the day after an early morning fire erupted at Crestview Towers, north of Surfside, WFOR reported.
About 300 people were evacuated from the building last month after North Miami Beach officials deemed it structurally and electrically unsafe based on a delinquent recertification report for the almost 50-year-old building, City Manager Arthur Sorey III told CNN at the time.

The recertification report was dated January 11 but wasn’t submitted until July 2, Sorey said. That sparked frustration for resident Harold Dauphin.

He learned of the evacuation when he was picking up his 7-year-old child from camp, he said. As Dauphin approached the residence, he saw helicopters flying above it and police going floor to floor, assisting with the evacuation, he said.

“I understand the call,” he told CNN. “It’s a great call knowing what happened at Surfside. So it’s better to be safe than sorry.”

At the Surfside site, engineers and investigators continue to comb through the rubble, working to determine the cause of the collapse.

Miami-Dade County officials announced last week a series of “sunshine” meetings to discuss possible policy and legislative changes related to the collapse. The first of the meetings, which will include local, state and federal officials, is slated for August 30.

“As we now move ahead with the task of seeking answers and developing policy remedies, it’s just as critical for us to once again coordinate our efforts to ensure a comprehensive, whole-of-government response,” Miami-Dade County Mayor Daniella Levine Cava said.