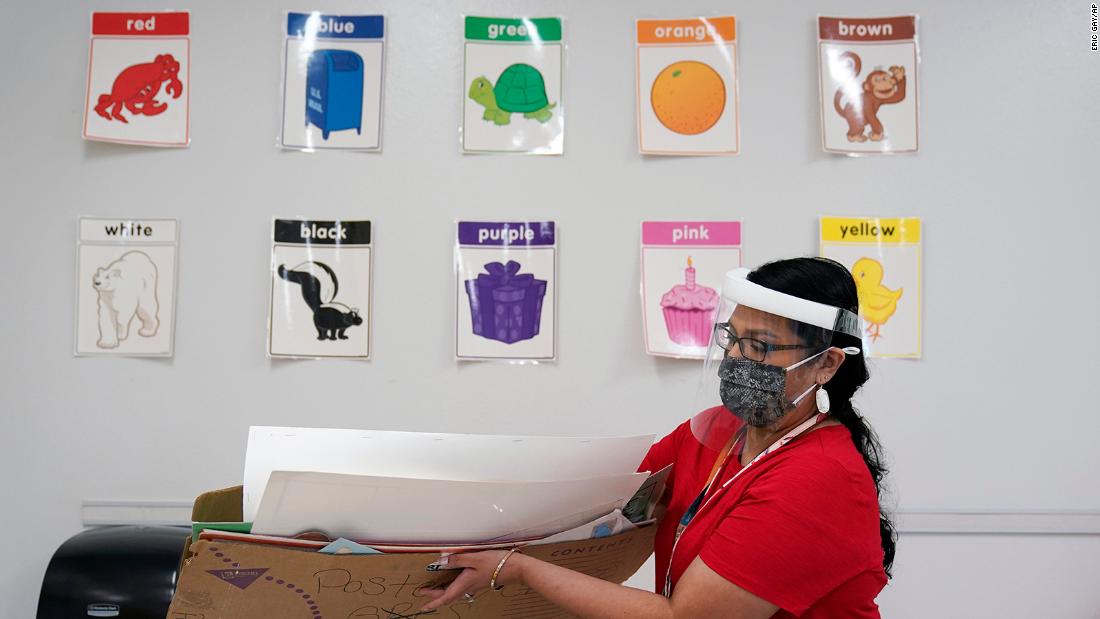 On Monday, Dallas County Judge Clay Jenkins asked a court for a temporary restraining order against the order, saying the governor “attempted to prohibit local elected officials from making a different decision, in response to local conditions, to protect their own communities.”

Judge Tonya Parker on Tuesday determined that the citizens of Dallas County “have and will continue to be damaged and injured” by Abbott’s order amid the Covid-19 surge and ruled that Jenkins should be allowed to implement mitigation strategies such as mask mandates on the local level, to protect residents and help curb the spread of the virus.

The temporary restraining order is in place until August 24, when a hearing for a temporary injunction is scheduled, according to court documents.

In a separate ruling Tuesday, Judge Antonia Arteaga granted a restraining order to leaders of the city of San Antonio and Bexar County, who had filed a lawsuit to regain local control over Covid-19 mitigation measures, saying in a news release the area was seeing an “alarming rise” in infections.
The county is recording a seven-day average of more than 1,350 new Covid-19 cases and reports more than 1,200 people hospitalized with the virus — 314 of whom are in the ICU, according to the San Antonio city website.

The requirement applies to all students age 2 and older, teachers, staff and visitors, regardless of vaccination status. Schools are also required to contact parents or guardians if they learn that a student was in close contact, as defined by the US Centers for Disease Control and Prevention, “with a COVID-19-positive individual on campus or during a school-related event,” San Antonio Metro Health Director Claude Jacob said in Tuesday’s news conference.

Unvaccinated people who have been found to have been in close contact with someone who tested positive for Covid-19 will also have to quarantine for two weeks, under the order, as well as remain off-campus and not attend any school-related events, Jacob added.

“The order has been cleared by a judge that we can do this, so it is a mandatory order, not a ‘we hope you do it.’ If you listened carefully to Mr. Jacob, those were ‘shalls’ not ‘may.’ ‘Shall have to do this,'” Wolff, the county judge, said.

Additionally, an emergency order was issued mandating masks in all Bexar County facilities, as well as any facilities owned by the City of San Antonio, Wolff said. A statement from the city of San Antonio said the requirement goes into effect on Wednesday.

Arteaga will render a decision on Monday on whether to issue an injunction against the governor’s order, which Abbott could appeal as far as the state’s Supreme Court.

“I commend everyone — school superintendents, and elected judges alike who are taking whatever steps are needed to protect the lives of the people they serve,” Hidalgo wrote. “Protecting the community during an emergency is a duty, not an option for government leaders.”

The rulings and Harris County’s announcement are the latest in a series of conflicts across the state — and the country — over mask mandates as schools gear up for reopening and while many students remain ineligible for a Covid-19 shot. Children under 12 are not yet allowed to get a vaccine in the US.

The Austin School District will be disregarding the governor’s order, as the Austin School Board of Trustees announced that effective Wednesday all individuals and visitors will be required to wear masks on all district properties.

In a statement Tuesday — prior to the judges’ rulings to grant the restraining orders — the governor’s office said, “We are all working to protect Texas children and those most vulnerable among us, but violating the Governor’s executive orders –and violating parental rights — is not the way to do it.”

“Governor Abbott has been clear that the time for mask mandates is over; now is the time for personal responsibility,” Abbott’s press secretary Renae Eze told CNN in a Tuesday email. “Parents and guardians have the right to decide whether their child will wear a mask or not, just as with any other decision in their child’s life.”

In Florida, the Broward County School Board voted Tuesday to maintain the district’s mask mandate despite an executive order from Gov. Ron DeSantis which effectively prohibits mask mandates in school districts.

The governor’s office on Monday said the state’s Board of Education could move to withhold the salaries of superintendents and school board members who disregard the executive order.

School board chair Rosalind Osgood said Tuesday she was not willing to “risk and play Russian roulette” with students who can’t get vaccinated.

“You can’t ignore this pandemic,” Osgood said. “It’s deadly, and it’s getting worse instead of better and the more we don’t use masks, the more we position the mutation of this virus to grow.”