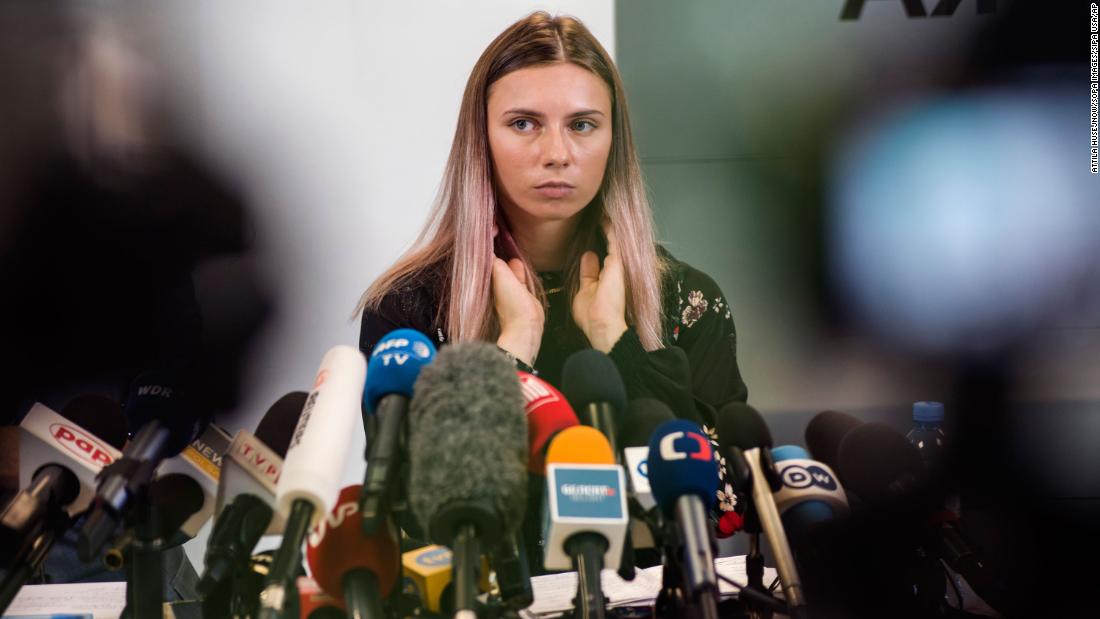 Belarus head coach Yuri Moisevich and team official Artur Shumak were removed from the Olympic Village in Tokyo and their Games accreditation canceled, the IOC said in a tweet Friday.

The Olympic body said it decided to remove the two coaches to safeguard “the wellbeing of the athletes of the NOC of Belarus who are still in Tokyo and as a provisional measure.”

On Sunday, Timanovskaya, 24, said Belarus team officials threatened her, removed her from the Olympic team and forced her to the airport in Tokyo, where she would board a flight back to Belarus after she criticized sporting authorities.
Fearing she would be arrested in Belarus, Timanovskaya refused to get on the flight and on Wednesday fled to Warsaw, Poland, where she has been granted a visa on humanitarian grounds.

The athlete was set to compete in the women’s 200 meters on Monday but was pulled from the event after speaking out social media criticizing a decision by team officials to enter her in the 4×400 meter relay — an event she had not competed in before.

Timanovskaya’s drama-filled plight has dominated global headlines around the Games and while her comments were not overtly political, her case has heightened fears of the safety of those who speak out against Belarusian officials.

Following the incident, the IOC launched a formal investigation and set up a disciplinary commission to clarify the role the two Belarusian coaches allegedly played.

“The two coaches were requested to leave the Olympic Village immediately and have done so. They will be offered an opportunity to be heard,” the IOC said.

CNN has reached out to the Belarusian national team for comment.

The Belarus National Olympic Committee said Timanovskaya was withdrawn from the Games due to her “emotional and psychological state,” a claim the athlete refutes.

In a press conference from Warsaw on Thursday, Timanovskaya said she was “very saddened by the fact that I was deprived of my chance to participate in Olympic Games.”

“We tried to overrule this decision so that I could still participate,” she said. “Those were five long years of preparation. I had to go through a lot — traumas, Covid … but still I hope that these were not my last Olympic Games, I hope for at least two more.”

The athlete previously told CNN that her grandmother said it was not safe for her to go back to Belarus because state television was broadcasting that she “had psychological problems.”

“She said maybe I’d end up in hospital or jail,” if she were to fly back, Timanovskaya said.

Fearing she would be in danger if she returned, Timanovskaya flagged down a policeman at the airport and said she needed help. After two days seeking refuge in the Polish Embassy in Tokyo, Timanovskaya flew to Warsaw via Vienna, where she met her husband.

Now she is seeking asylum for herself and her husband in Poland, where she awaits a hearing from the IOC on her case.

Regarding the hearing, Belarusian opposition politician Pavel Latushkosaid said at the press conference in Warsaw, the sprinter’s interests are being represented by a lawyer from Japan and the Belarusian sport solidarity foundation.

“We do not know if the national Belarus Olympics Committee has presented the necessary material, which also complicates the consideration of this issue,” Latushko said. “We expect that the decision will be made in favor of Kristina in relation to the illegitimacy of the decision made by the Belarus delegation.”

The sprinter received offers of asylum from multiple European countries but chose Poland because it was close enough for her parents to visit, and because she wishes to remain in sport and continue her career there, she said.