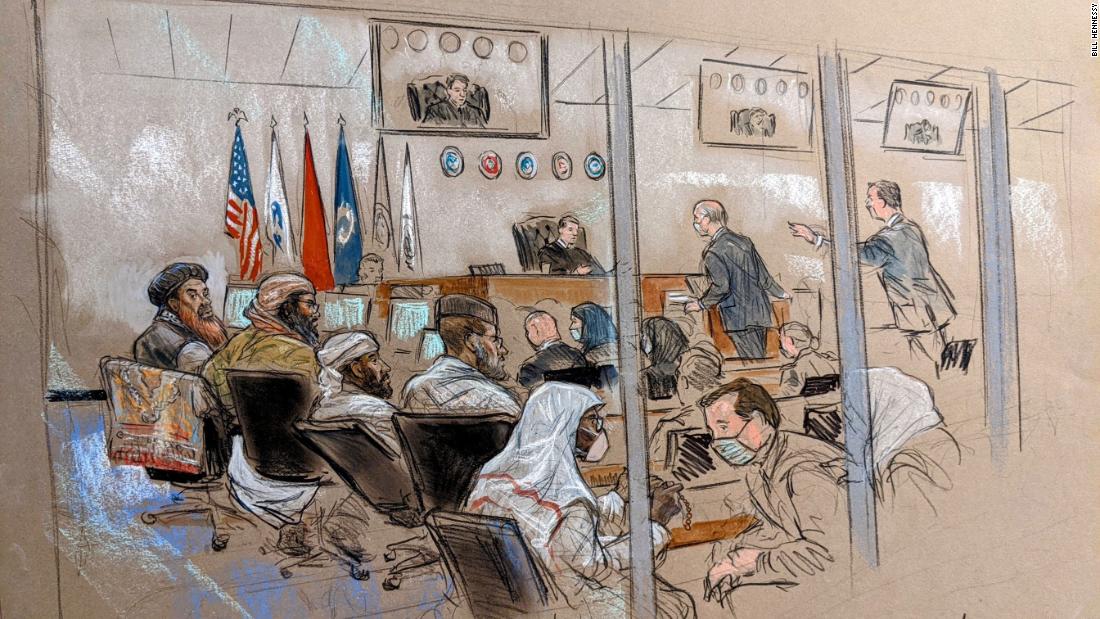 While the hearings this week were the first to be held in-person for a year and a half because of the Covid-19 pandemic, the case that aims to provide family members of the nearly 3,000 victims of September 11 with justice remains hamstrung by personnel changes and dozens of outstanding motions.

In the first week of in-person pretrial hearings since February 2020, lawyers spent time in court asking the latest in a series of judges about his experience and knowledge of the issues in the years-long case, including torture and the death penalty.

In the last hearing of the week on Friday, lawyers debated one of several outstanding motions about what evidence defense attorneys will get from the US government regarding the time the detainees spent in CIA custody in undisclosed locations, known as “black sites,” in the early 2000s.

The five accused, including Khalid Sheikh Mohammed — who has been dubbed the mastermind behind the attacks, have been detained and imprisoned at Guantanamo Bay since 2006.

While the men were arraigned in 2012 during the Obama administration, the case has dragged on for years. There are dozens of outstanding motions, and lawyers on both the prosecution and defense teams have come and gone in the almost decade of litigation. Four judges have presided over in-person hearings in the case, including the latest judge to take it on, Judge Col. Matthew McCall, an Air Force judge.

Whether or not McCall should preside over the case has been a major subject at the pretrial hearings this week as lawyers from both sides questioned his suitability.

The prosecution objected to McCall’s initial appointment in October 2020 because he did not have the required two years of experience needed to preside over a military commission case. McCall recused himself after that, because he did not want to be the reason the case was held up any longer, he said in court this week.

Because this is a military commission, judges are appointed by the military and are a part of the military. They serve specific terms when they are given postings.

All five detainees could face the death penalty, and all five were brutally tortured.

“The effects of torture are only always in the room,” Gary Sowards, lead counsel for Mohammed, said on Wednesday. “Those are things we deal with on a day-to-day basis.”

All five men suffer from different health issues because of the torture they endured while in CIA custody, according to their lawyers.

He did not display a deep knowledge of the issues surrounding the case, saying he had not read the congressional 9/11 Commission report or the Senate Select Committee on Intelligence report about CIA detention and interrogation, both released during the Obama administration. McCall also said he did not know about the legal history of the death penalty, but that he plans to take a course on it this fall.

McCall has not read all of the thousands of pages of legal documents associated with his new case, he told attorneys when asked.

David Bruck, who recently became the lead defense attorney for detainee Ramzi Bin al-Shibh, accurately summed up the two paths McCall’s career could take if he remains the presiding judge for the case.

Bruck said McCall could either be the judge who unties the “Gordian Knot of the 9/11 case, bring it to trial” and bring justice to the family members of victims who died in the terror attacks, or it could go down “the other road,” where the case “went nowhere and it happened on your watch.”

When Bruck asked McCall if he was aware of this, McCall gave a solemn nod and quietly said, “yessir.”

After attorneys had a chance to object to McCall presiding over the case — three defense attorneys objected, one did not object, one deferred and the prosecution did not object — McCall began debate on one of the many outstanding motions in the case — about how much detail defense attorneys will be able to get from the US government regarding interrogations of the detainees while they were in CIA custody at so-called black sites.

“When you are hanging from the ceiling for days on end… you don’t know what’s happened,” Cheryl Bormann, lead counsel for Walid Muhammad Salih Mubarak Bin ‘Attash, said in court, referring to torture he was subjected to when he was in CIA custody.

The fact that attorneys are still arguing over what evidence they can have access to nine years into pretrial hearings demonstrates how far this case is from being resolved, and how far away its original intended mission — to bring justice to family members of 9/11 victims — feels.

“I pretty much stopped making trial estimates because every single one I’ve ever made has been wrong, but there’s no real scenario of getting to trial before two years,” said James Connell, lead attorney for Ali Abdul Aziz Ali who has worked on the case since 2012.

Family members of 9/11 victims sat in the gallery at the back of the military courtroom during the three hearings held this week separated from the media and other observers in the gallery by a blue curtain.