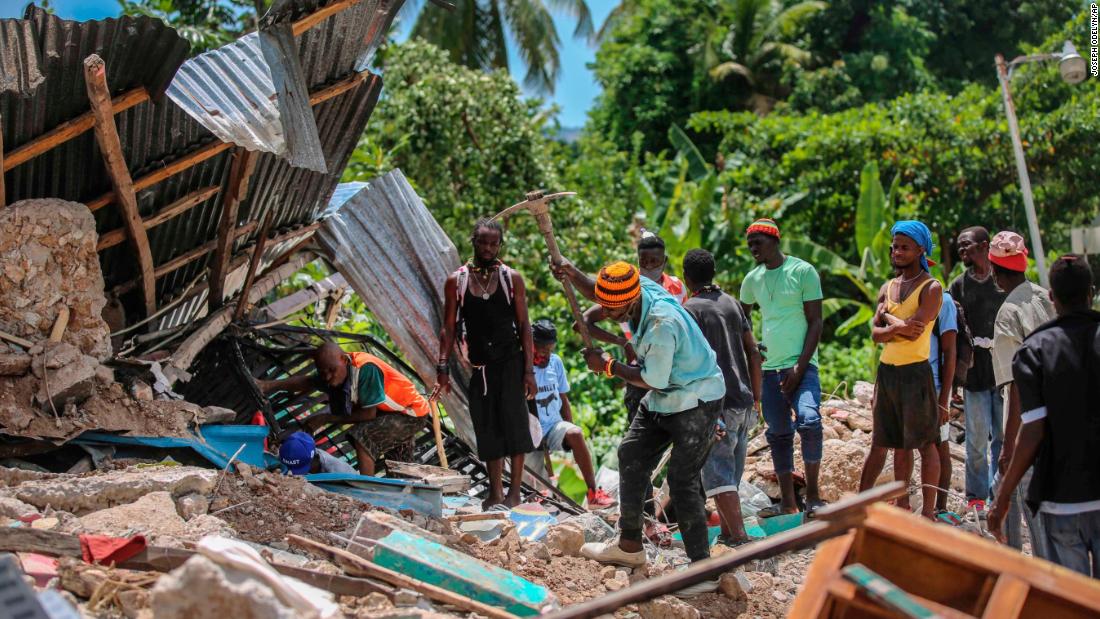 Tropical storm conditions are possible in the Dominican Republic and Haiti later today, Brink said, adding that several inches of rain are forecast — with up to 15 inches (38 centimeters) possible in some isolated areas — through Tuesday.

“I am worried about the upcoming storm as it can complicate the situation for us,” Jerry Chandler, head of Haiti’s civil protection agency, said on Sunday.

The agency reported at least 1,297 people dead and more than 5,700 injured on Sunday. Those numbers are expected to rise as search and rescue efforts continue.

The quake destroyed 13,694 homes and damaged another 13,785, officials from the agency said.

The destruction has also pushed hospitals to the brink and blocked roads, making it difficult for vital supplies to reach the affected areas.

“We really need help, yesterday I was helping at the hospital and things were out of control,” a volunteer named Marcelin Lorejoie told CNN on Sunday.

“Not enough doctors, not enough medicines and we have people with serious injuries. We need urgent help before things (get) more complicated.”

Authorities are going from house to house in search of survivors — efforts which demand a tremendous amount of resources.

At the site of one collapsed hotel, a CNN team saw just one excavator, which was not working at the time. There was no police or security presence nearby, as people carried air conditioning units away from the wrecked building.

The earthquake struck at 8:30 a.m. local time on Saturday, at a depth of about 10 kilometers (6.2 miles); its epicenter was about 12 kilometers (7.5 miles) northeast of Saint-Louis-du-Sud in the southwest part of the country.