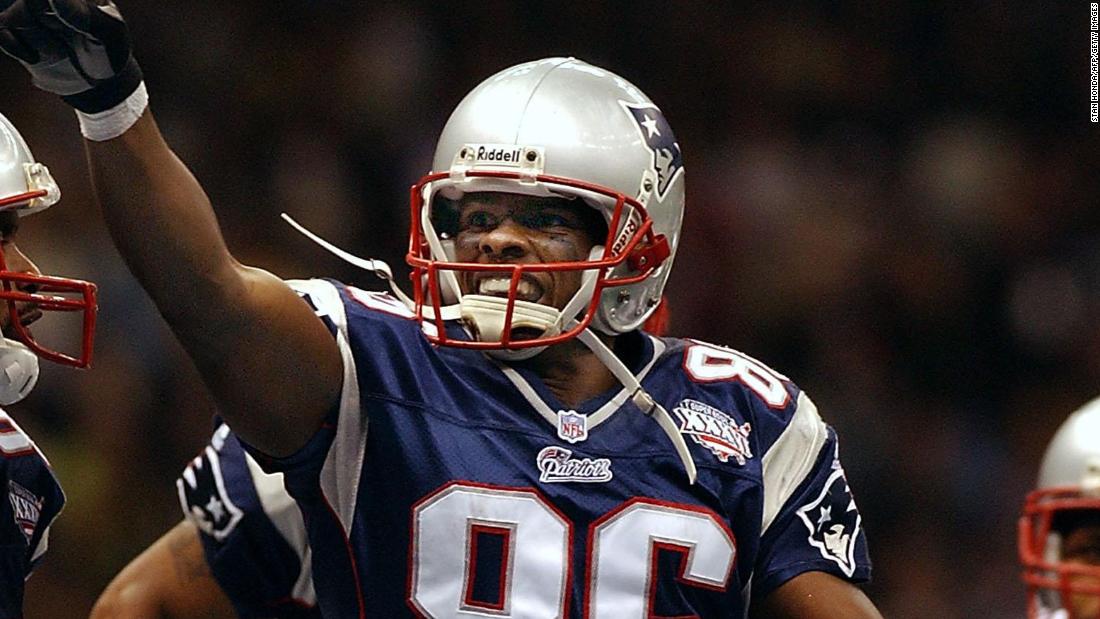 According to The State newspaper, the Richland County (SC) Coroner confirmed that Patten died in a motorcycle crash. The South Carolina Highway Patrol say Patten’s motorcycle crossed the center line into opposing traffic and struck another vehicle just outside Columbia, South Carolina.

The Richland County Coroner’s office has not responded to CNN’s request for more information.

“I am heartbroken by the news of David’s passing,” said Patriots Chairman and CEO Robert Kraft. “He was a devout Christian who followed his passion following his football career and founded his own ministry. David transitioned from an undersized and understated wide receiver to a powerful and passionate preacher. In New England, he will always be remembered as a three-time Super Bowl Champion.”

Patten’s manager and friend, Sam Gordon, expressed his grief in a heartfelt post on social media.

“Very rarely do people get to call their childhood heroes/favorite players their friends. You blessed with me with that,” wrote Gordon. “Thank you so much for your friendship, your inspiration, and trusting me to be your manager.”

Patten played for five different NFL teams in his 12-year career, finding his greatest success as a member of the Patriots. Patten holds the distinction of catching Tom Brady’s first career Super Bowl touchdown pass in 2002. That was the only offensive touchdown scored for the Patriots in their 20-17 win over the St. Louis Rams.

Patten won two more Super Bowls with the Patriots over the next three years.

In an Instagram post, Brady wrote of Patten, “The consummate professional. RIP my friend. My love goes out to David’s family.”

“It breaks my heart to hear of David’s tragic passing at such a young age,” said Patriots Head Coach Bill Belichick. “I am grateful to have coached David. He is an essential person and player in Patriots history, without whom we would not have been Super Bowl champions. I especially appreciate David for his professional journey.”

Patten was a standout wide receiver at Western Carolina University where he played from 1992-1995 and was all-Southern Conference as a senior. His son, Daquan Patten, attends the university and is a senior on this year’s Catamount team.

He went undrafted in 1996, and spent a year playing arena football before getting his shot in the NFL with the New York Giants in 1997. Patten scored 24 touchdowns in his NFL career, 16 of which came with the Patriots.

“As much as anyone, David epitomized the unheralded, self-made player who defied enormous odds to not only earn a job in the NFL but to become a key player on multiple championship teams,” Belichick said. “I can speak for anyone who had the pleasure to be around David that his work ethic, positive energy and character were elite. My deepest condolences are with his family and loved ones.”

CNN’s Hannah Sarisohn and Steve Almasy contributed to this report.