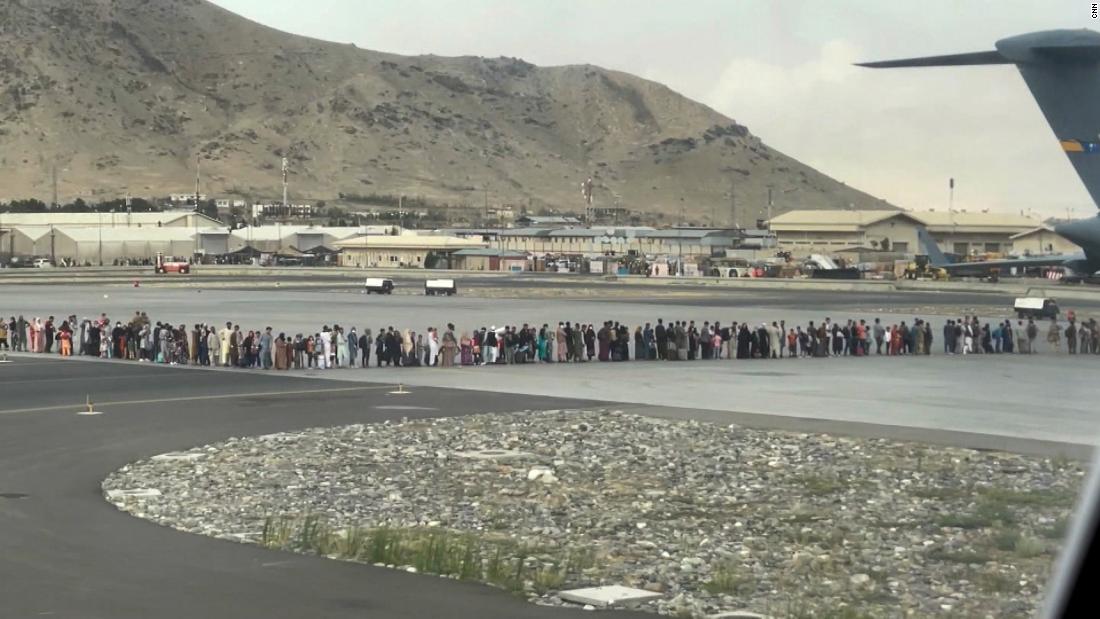 The vast majority of those still trying to get out of Kabul were Afghans, the source said, adding that applicants for the Special Immigrant Visa (SIV) program — an avenue for Afghans who worked for United States forces and agencies to get out of the country — are now permitted onto the airport.

SIV applicants were told not to come to the airport on Monday as the US tried to clear backlogs of evacuees and ensure US passport and green card holders got on aircraft out of Kabul before the August 31 deadline to complete evacuations.

But solid estimates of the number of people both on and leaving the airport were hard to determine.

The Pentagon said early Tuesday that 17 US military and partner nation aircraft evacuated approximately 16,000 people from Harmid Karzai International Airport within the previous 24 hours, with the US Air Force transporting just under 11,000 of them.

That gave an opening to expand the evacuation, the source said.

“The aperture has widened,” they said. SIV holders plus immediate family and anyone who can “clearly and credibly articulate a clear and credible connection” with the US government could now get out, the source said.

Despite that relaxation of restrictions, the gates to the airport remained closed, the source said.

“But the people who are already there or being pulled in individually, they’re flexing a bit,” they said.

About 300 US citizens had been brought in overnight, and moves were coordinated with the Taliban, the source said.

The closure of the airport’s gates, however, significantly reduces the number of SIV applicants who can reach the base.

Afghan security forces continued to use unofficial means to get their colleagues and friends onto the base, the source said. “Not sure who the Afghans are still pulling in, but it seems to be a steady trickle,” they said.

The source also said there had been no progress in the evacuation of locally employed embassy staff, although planning was underway.

While the backlog of evacuees was being whittled down in Kabul, strain was showing up elsewhere in the route that would eventually lead evacuees to resettlement outside Afghanistan.

One of the main waypoints for evacuees, the massive US Ramstein Air Base in Germany, had reached its capacity of 7,800 evacuees on Monday.

On Tuesday morning, leaders of the Group of 7 will meet in a virtual gathering, the first such international forum since the crisis in Afghanistan unfolded. With the end of August deadline for US troops to withdraw from Afghanistan fast approaching, US allies are expected to press President Joe Biden to extend his country’s military deployment, officials familiar with the matter told CNN.

Biden has not publicly committed to such a move, worrying some allies who fear there won’t be enough time to get their citizens and Afghan allies who assisted in the war effort out of the country.

At the same time, US military leaders advised Biden he must decide by Tuesday whether to extend the evacuation in Afghanistan, according to a defense official directly familiar with the discussions.

The decision must be made by Tuesday to give the military enough time to withdraw the 5,800 US troops on the ground in Kabul, as well as their equipment and weapons, the official said. If the President sticks to the August 31 deadline, the military anticipates “a few more days” of trying to evacuate as many people as possible before the drawdown of US forces begins, possibly at the end of this week.

Several of Biden’s advisers have advised against an extension, citing the security situation on the ground, CNN has learned.

British Defense Secretary Ben Wallace said on Monday that its Kabul evacuation operation was now down to “hours, not weeks.”

Britain was working to align with Washington’s August 31 deadline for a complete troop withdrawal from Afghanistan, a Defense Ministry source said.

The United Kingdom has evacuated a total of 6,600 people since August 14, and more than 8,000 since April, Wallace told reporters. But he said people should be honest with “the reality, which is we won’t get them all out.”

Meanwhile, the Taliban was holding fast to an August 31 departure deadline for foreign forces.

A Taliban spokesperson said that if US troops were still in the country after that, “our leadership will take proper and necessary decision[s].”

CNN’s Kevin Liptak and Barbara Starr contributed to this report.