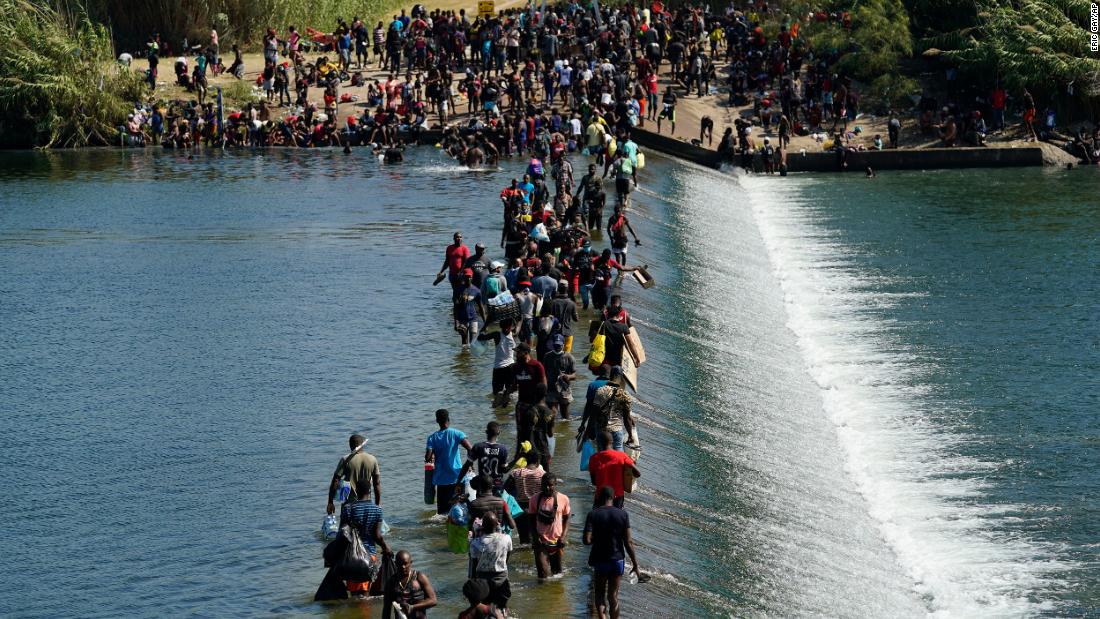 “We told our son we were camping so he wouldn’t worry,” said the 33-year-old migrant from Venezuela, who crossed the shallow waters of the Rio Grande with her partner and their four-year-old child.

“You’re thinking, What will happen to us?” she said of the two days they spent in the teeming staging area shaded by the bridge between Texas and Ciudad Acuña in northeastern Mexico.

Thousands of migrants — including families, pregnant women and babies — were crowded in the makeshift camp under the Del Rio International Bridge on Friday. They sleep in the dirt, surrounded by growing piles of garbage, exposed to the elements and without much food and water in hopes of being processed by the overwhelmed US Border Patrol.

The number of migrants — many of them Haitian — assembled in the temporary site have swelled from roughly 400 one week ago to more than 12,000 on Friday in a mounting immigration crisis for the Biden administration.
Haiti is reeling from a major earthquake that left more than 2,000 people dead and thousands more injured, as well as from the assassination of President Jovenel Moise in July.

Many Haitians are believed to have been living in South America after the 2010 earthquake in Haiti but the economic toll of the pandemic on the region fueled migration to the US southern border.

Under a public health order linked to the coronavirus pandemic, border agents have the authority to turn away adults and migrant families. But a federal judge ruled Thursday that the Biden administration will no longer be allowed to apply the order to migrant families with children.

A Homeland Security official said Thursday that expulsion and deportation flights to Haiti will continue.

Border crossings have reached the highest level in decades, with US Customs and Border Protection reporting more than 208,000 in August alone and a total this fiscal year of more than 1.5 million.

Del Rio Mayor Bruno Lozano, a Democrat, has asked the Biden administration for additional resources and manpower, saying that it could take weeks to process the migrants now amassed at the border.

“The Border Patrol is unfortunately strained to its limit, beyond limit,” he said.

In a statement, the Border Patrol said it was boosting the number of agents in the area to “immediately address the current level of migrant encounters and to facilitate a safe, humane and orderly process.”

The shaded area is being used as a temporary staging site to “prevent injuries from heat-related illness” while migrants wait to be taken into custody, according to the Border Patrol. More drinking water, food, towels and portable toilets were being delivered, the agency said.

Images from the area show crowds of migrants at the camp while others wade across the Rio Grande near the bridge. Some carried young children across the knee-length water; others hauled their belongings in plastic bags or gallons of water. Tents fashioned from blankets and pieces of wood were erected. Clothes were laid out on the ground to dry under a searing sun.

Lozano said at least one woman had given birth.

Most of the migrants will be expelled or placed in removal proceedings, according to federal officials.

Villasmil, who arrived by bus at a migrant center after being processed, said her family was fleeing political persecution in Venezuela.

At the staging area after crossing the Rio Grande, she said, her family was issued a ticket with a number. They waited two days to be processed. Now they were hoping to make it to San Antonio, about 150 miles away, where they plan to stay with a relative.

At the center run by the Val Verde Border Humanitarian Coalition, the migrants have access to phones, restrooms, clean clothing and food.

“It’s sad,” Villasmil said. “You leave the problems in your country and you come here.”

Her four-year-old son wore a red shirt that said, “Good Vibes.” The boy romped around three backpacks — one with Paw Patrol cartoon characters — stuffed with their belongings.