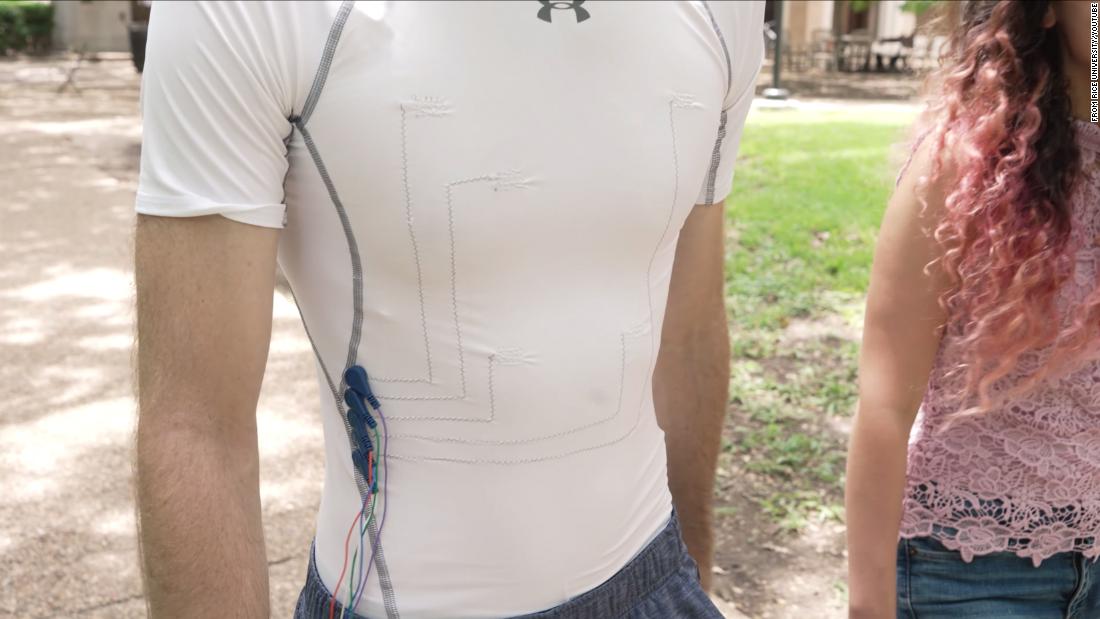 The so-called “carbon nanotube threads” work similarly to the wires in an electrocardiogram (EKG) monitoring device, which measures heart rhythms to detect heart conditions. But instead of having to be patched onto the skin, they can be sewn into a t-shirt and worn like normal athletic wear, according to a new study from researches at a Rice University Brown School of Engineering lab. And unlike wires, they say the threads can comfortably move with the wearer, and be washed, stretched and worn repeatedly without breaking down.

Though likely a ways off from going into production for consumers, the material could eventually help replace bulky EKG Holter monitors in medical settings and heart-rate monitoring watches and chest straps for athletes, in addition to other potential uses.

“Another interesting application of this technology is that we can use them for next-generation military uniforms,” Lauren Taylor, a Rice University graduate student and lead author of the study, said in a video about the product. “Not only are we able to use this material for EKG electrodes, we’re also able to use them as antennas so that we can track the location of military personnel.”
Worldwide spending on wearable devices is expected to grow 18% to $81.5 billion in 2021, and another 15% in 2022, according to Gartner. Many tech companies have invested in building similar capabilities into devices — Apple (AAPL) Watch introduced heart-rate monitoring in 2018 and has added other medical functionalities, and in 2019, Google (GOOGL GOOGLE) announced plans to buy FitBit, a deal completed earlier this year.

The Rice University lab first developed carbon nanotube fiber in 2013, and has studied its use in medical procedures, such as in cochlear implants for hearing loss and to repair damaged hearts. But at the time, the original filaments (about 22 microns wide) were too thin to be used by a standard sewing machine.

For this latest iteration, researchers worked with a rope-maker to weave the filaments together into a material similar to regular sewing thread that could be sewn into athletic apparel. The resulting “smart” shirt provides “soft, wearable, dry sensors for noninvasive and continuous” electrocardiogram monitoring, the study states. (However, it’s worth noting that existing EKG monitors have improved to become already fairly comfortable and non-intrusive.)

With some modifications, apparel with these fibers could eventually be able to track other vital signs, according to the researchers.

The “smart” shirts aren’t entirely without wires, however. One example shows the nanotube fibers in the shirt feeding signals to wires on the bottom that transmit the information through Bluetooth technology to a computer.