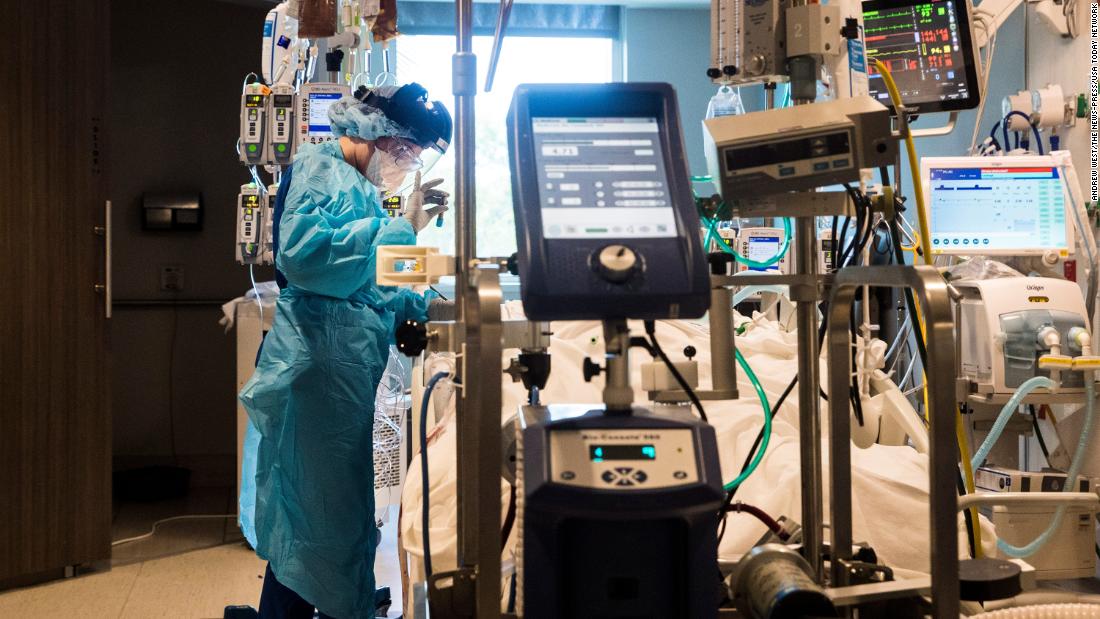 In the month of August, the US has so far reported more than 1.5 million new cases of Covid-19, more than three times the numbers for Iran and India — which now hold second and third place, JHU data shows. And the seven-day average has topped more than 135,000 cases, well ahead of other nations.

On a state-by-state comparison, Louisiana has the highest rate of new cases per capita, followed by Florida.

“That’s how badly things have gotten out of hand. There is a screaming level of transmission across the southern states right now. And now we’re starting to see this happening among younger age groups,” Hotez said.

Florida on Friday broke its own record high in Covid-19 cases over the past week, reporting 151,415 new cases — the most infections recorded during a seven-day period since the pandemic upended lives across the globe.

The surge has been fueled by the more tranmissible Delta variant, overwhelming hospitals across the country.

In Louisiana, Gov. John Bel Edwards said hospitalizations hit a pandemic record high of at least 2,907 patients, up by six people from a day earlier.

“They’re not just the highest that they’ve ever been. They’re almost a third higher than at any other point in this pandemic. Our hospitals are struggling. Staff remains the limiting factor on capacity. Our staff at our hospitals, nurses and doctors and respiratory therapists and physician’s assistants, you name it, they’re maxed out,” the governor said Friday.

Edwards said state hospital leaders are worried about the surges.

“I will tell you that I’ve never heard them express more concern, more alarm, or anxiety than they did this week, because we are rapidly approaching the breaking point,” Edwards added.

And in Alabama, there is an alarming uptick of infants as well as teenagers hospitalized with Covid-19, according to Dr. David Kimberlin, the director of the Division of Pediatric Infectious Diseases at the University of Alabama in Birmingham.

“We’re seeing a lot of children who are very, very sick admitted to our hospital. We have almost twice as many right now as we did at the previous worst part of this pandemic, which was probably in January,” Kimberlin told CNN’s Erin Burnett Friday.

“These children are coming in fighting for breath, fighting for the ability to basically get through this devastating illness, many of them are on ventilators, maybe a quarter or so on ventilators or heart-lung bypass machines,” he said.

He added that as children return to classrooms, “it’s critically important that everyone in schools masks, whether you’re vaccinated or not.”

“I think the most efficient way to do that is to have a mandate, to have a requirement … that everybody needs to do so. And it saddens me that we seem to be fighting about the way we go about doing it. We all ought to — and I want to believe that we do — have our own children’s best interest at heart. We got to do this for them.”

State and local officials spar over mask and vaccine mandates

But masking children in schools has become increasingly polarizing, especially in states where vaccination rates are lagging and Covid-19 infections as well as hospitalizations continue to increase.

Republican Govs. Ron DeSantis of Florida and Greg Abbott of Texas have issued executive orders that ban mask mandates in their states. DeSantis, however, went a step further and threatened to withhold the salaries of superintendents and school board members who disregard his order.

On Friday, the Texas Court of Appeals ruled against Abbott, upholding that mask mandates may remain in Bexar and Dallas counties. Abbott had requested the appeals court to stay rulings from two lower courts that decided mask mandates in those counties can be effective, despite the governor’s executive order banning mask mandates.

In Arizona, education groups are suing the state for banning public schools from imposing mask and vaccine mandates.

The Arizona School Boards Association, the Arizona Education Association and other advocacy groups filed the lawsuit Thursday, arguing that the new laws favor private schools over public districts because they don’t apply to public schools.

“Students in Arizona’s public and charter schools will be less safe in their educational environment than students in private schools,” the lawsuit states.

The lawsuit seeks to overturn the bans on mandates. Arizona Gov. Doug Ducey and Attorney General Mark Brnovich did not respond to requests for comment Friday.

“This legislative session was unprecedented. The legislature enacted substantive laws in budget reconciliation bills without notice to the public and on subjects that are completely unrelated to one another,” plaintiffs’ attorney Roopali H. Desai said in a written statement provided to CNN.

3rd dose for immunocompromised is not a “booster” shot, expert says

Meanwhile, the U.S. Food and Drug Administration on Thursday authorized an additional third dose to be administered to people with compromised immune systems.

And on Friday, vaccine advisers to the CDC voted unanimously to recommend the additional dose for some immunocompromised people. CDC Director Rochelle Walensky quickly endorsed the vote, which means people can begin getting third doses right away.

On Friday, Michael Osterholm, the director of the Center for Infectious Disease Research and Policy at the University of Minnesota, said it’s important not to confuse that third dose with a “booster” shot.

“These are really about finishing a primary series. Think about childhood immunizations. We have vaccines for which we need three of four doses. What we found here is that the immune-compromised often didn’t mount an adequate response at all. So we’re still trying to build that. That is different than a booster dose where someone did respond and in fact over time that wanes,” Osterholm told CNN. “I think it was a great decision.”

At a meeting of CDC vaccine advisers, Dr. Heather Scobie said a disproportionate number of vaccine breakthroughs are among immunocompromised people. Almost one-third — 32% — of vaccinated breakthrough cases are among that group, she said.

While immune-compromised people make up about 2.7% of the adult population — about 7 million people — they’re more vulnerable to infection, said Dr. Amanda Cohn, the executive secretary of the CDC’s Advisory Committee on Immunization Practices.

She said vaccine effectiveness is about 59% to 72% in immunocompromised people, compared to 90% to 94% overall.

“Immunocompromised people are more likely to get severely ill from Covid-19. They are at higher risk for prolonged SARS-CoV-2 infection and shedding and viral evolution during the infection and treatment, particularly amongst hospitalized patients,” Cohn said.