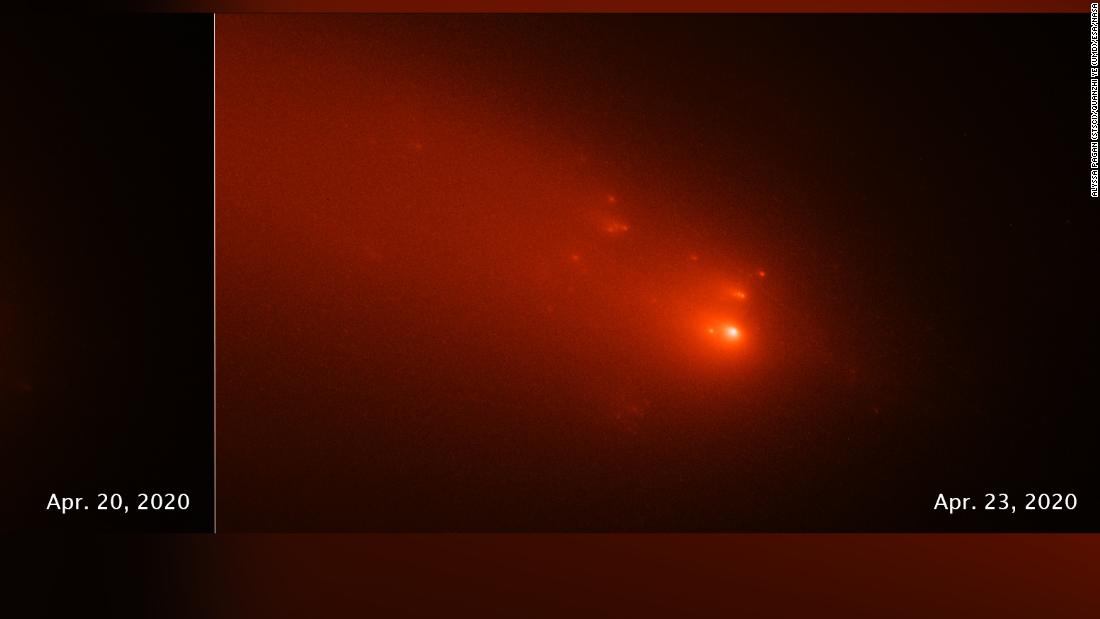 Now, observations made while the comet, named ATLAS, was still intact have shed light on the comet’s “family,” which stretches back thousands of years.

Comet ATLAS was first detected by the Asteroid Terrestrial-impact Last Alert System, or ATLAS, which is operated by the University of Hawaii, on December 28, 2019.

Quanzhi Ye, an astronomer at the University of Maryland, observed the comet using the Hubble Space Telescope. Ye and his colleagues used their observations to determine that comet ATLAS was actually a remnant from one that likely streaked across our sky 5,000 years ago. This ancient comet came within 23 million miles of the sun, closer than Mercury is to our star, and Stone Age civilizations across North Africa and Eurasia likely witnessed the celestial sight. The study published in July in the Astronomical Journal.

There are no records of this sighting, but studying comets in the way that Ye and his team analyzed comet ATLAS helps them trace comet origins. In fact, ATLAS’ orbit around the sun followed a similar track as a comet that was observed in 1844, which suggests both of these comets were “siblings” that came from a parent comet that broke apart centuries before.

Comet ATLAS and the 1844 comet were originally linked by amateur astronomer Maik Meyer.

It’s not uncommon for a comet to break apart into a “family.” Multiple telescopes, including Hubble and even the Galileo spacecraft, were focused on Jupiter in July 1994 when the comet Shoemaker-Levy 9 was shredded by the gas giant’s gravitational pull. It formed a “comet train” made of pieces of the comet that formed a line.

The comet’s demise had been predicted by astronomers. They watched as pieces of it fell into Jupiter, creating a spectacular fireball and leaving scars on the massive planet that were visible for months afterward.

Comet ATLAS is different, having disintegrated when it was more distant from the sun than Earth — unlike its parent comet, which was closer to the sun when it broke apart.

“If it broke up this far from the Sun, how did it survive the last passage around the Sun 5,000 years ago? This is the big question,” Ye said in a statement. “It’s very unusual because we wouldn’t expect it. This is the first time a long-period comet family member was seen breaking up before passing closer to the Sun.”

When astronomers watch a comet break apart into pieces, they can also determine how it came together in the first place. Comets are gigantic dirty snowballs made of dust and ice that come from the edge of the solar system.

One part of comet ATLAS broke apart within days, while another fragment survived for weeks.

“This tells us that part of the nucleus was stronger than the other part,” Ye said.

It’s possible that the comet was ripped apart by the material it was ejecting, or it may have blown apart like a firework.

“It is complicated because we start to see these hierarchies and evolution of comet fragmentation. Comet ATLAS’ behavior is interesting but hard to explain,” Ye said.

Meanwhile, comet ATLAS’ sibling, the one observed in 1844, won’t be visible in our skies again until the 50th century.