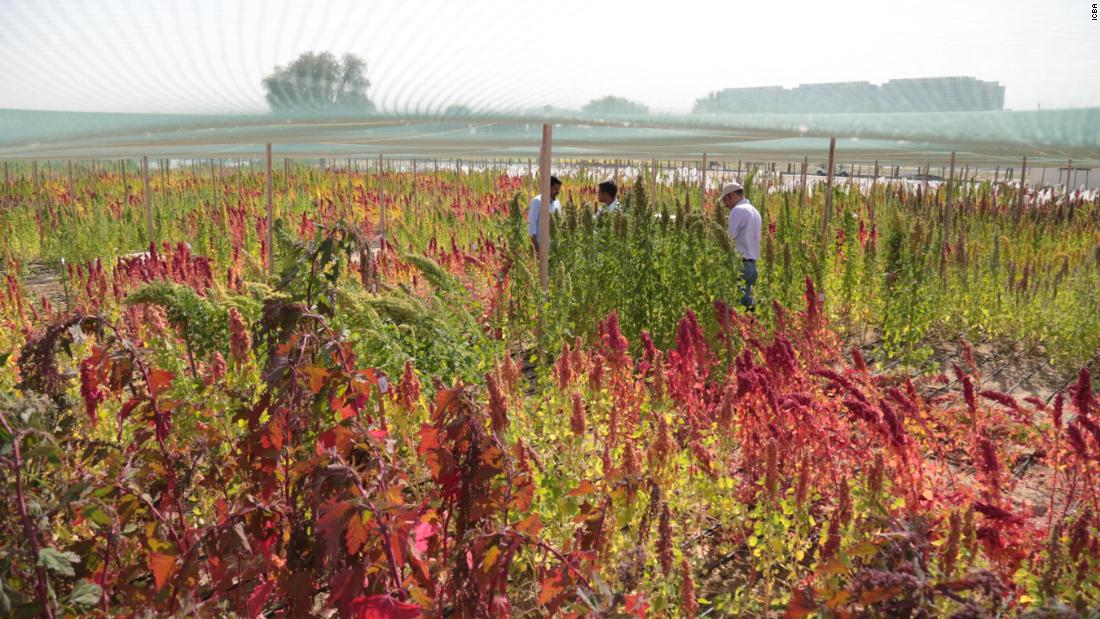 In the Dubai desert, farmers must contend with intense heat, limited freshwater and sandy soil. Here, the International Center of Biosaline Agriculture (ICBA) is transplanting and growing salt-loving superfoods in an effort to expand food diversity in the region.

“Freshwater is becoming more and more scarce,” explains Dionysia Angeliki Lyra, agronomist at the ICBA. “We have to focus on how we can utilize low-quality, saline water resources for food production.”

Desert farming has existed for thousands of years, but not all desert plants provide the nutrition needed to feed the growing population. The ICBA, a not-for-profit initiative launched in the United Arab Emirates in 1999, embarked on a mission to find highly nutritious crops all over the world that could adapt to and survive in extreme weather conditions — and thrive when grown using seawater and brine from desalination projects.

Today, the ICBA boasts a unique collection of over 13,000 seeds. The program has introduced non-traditional crops to the desert, such as quinoa from the South American Andes.

Its scientists tested over 1,200 varieties of quinoa, of which five can grow in these extreme conditions. Farmers in more than 10 countries in the Middle East and North Africa are already producing the superfood, and the ICBA is now introducing it in rural communities in Central Asia.

Little-known beyond some parts of Europe and North America, salicornia is a plant from the southern US that needs saline water to grow. It has also been transported to the Dubai desert, where it is thriving. The center deems it the “desert superhero” thanks to its adaptability and versatility. The crop is used for food production and is being tested as a biofuel.

The ICBA currently produces about 200 kilograms of quinoa and 500 kilograms of salicornia for research and seeding, while also working with a food company in Dubai to develop salicornia-based food products with the aim to increase consumer adoption.

Lyra believes rethinking the types of foods farmers grow can have a long-term impact in these environments.

Adapting for the future

The work of ICBA is part of a global effort to find alternate ways to produce food, with total food demand expected to increase between 59% to 98% by 2050. But with the effects of climate change already being felt around the world, Joshua Katz, partner at consulting firm McKinsey & Company, believes that more than one system will be needed to provide food security in the future.

“Feeding the world, establishing food security, providing nutritious food in a sustainable manner — there’s a lot that we’re asking of the food system,” he says. “In order for us to deliver that to our growing population, with evolving diets and increasing focus on things like sustainability and health, we’re going to need multiple types of production systems to meet all those different needs or different requirements of the food system.”

The United Nations estimates 41 million people are currently on the brink of famine. With only 11% of the world’s land surface used for crop production, desert agriculture is becoming a real option in harsh environments, as millions live in lands turning into desert.
Countries like the UAE, which are highly dependent on food imports, are progressively relying on different technologies such as indoor vertical farms and smart greenhouses in the desert to increase local food production.

Joshua Katz sees efforts like ICBA’s as an example of how governments can use technologies to improve local production and prepare for the future.

The ICBA is now looking into adapting its technique in Central Asia and sub-Saharan Africa, with the aim to bring crop diversification and water use productivity to areas with severe salinity issues.