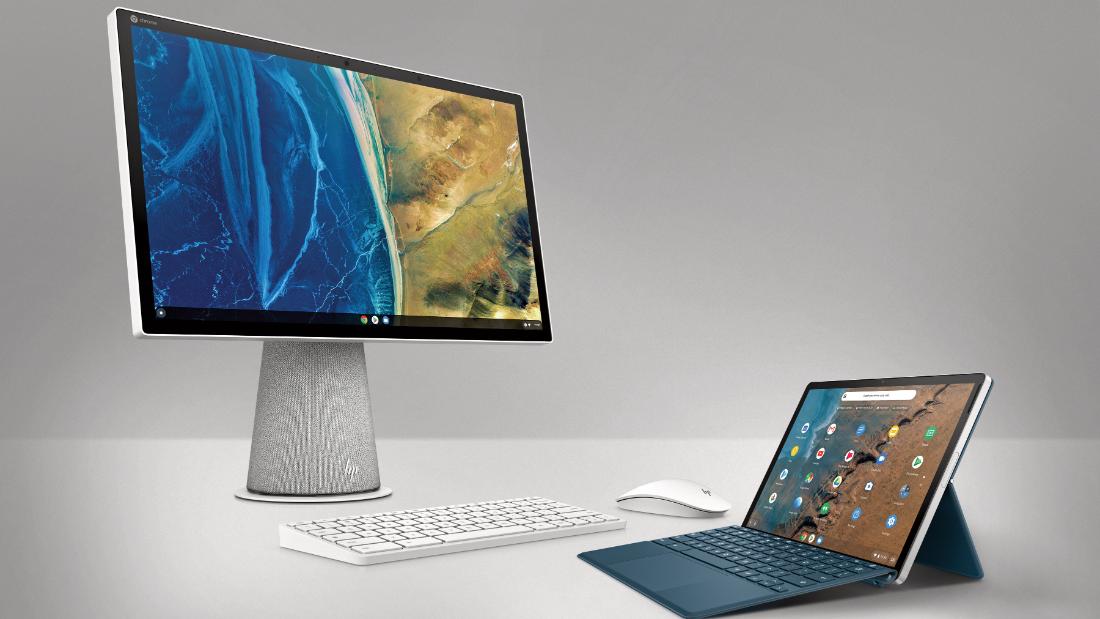 What if a family computer could also serve as a TV, a smart speaker and a giant tablet for viewing photos? That’s the idea behind the new $599 HP Chromebase 21.5, which is the company’s first all-in-one computer with a rotating display.

And If you’re sold, HP’s versatile new desktop is available now. Launching alongside it later this year is the HP Chromebook x2, which is the world’s first detachable Chromebook with the option of 4G LTE for staying connected while you work on the go. Both of these devices look pretty promising for folks who want a dependable Chrome OS device for either the home or the road, so let’s take a deeper look at each of them.

Out of HP’s two new devices, the Chromebase 21.5 really has caught our attention. This all-in-one Chrome machine looks like a typical, iMac-like desktop computer at first glance — except for the fact that you can rotate its display a full 90 degrees to turn it into a giant vertical touch screen.

This rotating 21.5-inch display has a number of compelling potential use-cases. In horizontal mode, you could use the Chromebase like a typical computer screen, getting work done using the included wireless mouse and keyboard, watching movies or doodling with touch controls. Flip it vertically, and you’ve got a 1080p screen ideal for displaying family photos, scrolling through web pages with your fingers and — if you have younger family members around — watching TikTok videos in all of their high-resolution glory.

Another standout feature of the HP Chromebase 21.5 is the fabric-wrapped base which contains aBang & Olufsen speaker and looks pretty snazzy. Combine that with the built-in Google Assistant capabilities, and you’ve effectively got a smart speaker that can play music, tell you the latest weather or traffic info using hands-free voice commands.

Other key specs include a 5-megapixel camera for hopping on video calls, complete with a physical “Privacy Camera Switch” for blocking it when you don’t want to be seen. You can configure the Chromebase with up to 256GB of SSD storage for your photos and files, as well as 16GB of RAM that should be plenty for everyday multitasking and video streaming. That storage is a little bit low — other all-in-one PCs offer anywhere from 512GB to 2TB of space — but it’ll likely be enough for basic family use.

Joining the new HP Chromebase is the HP Chromebook x2 11, which is the first detachable Chromebook with 4G LTE capabilities. That means that this 2-in-1 device — which can be used as both a laptop and a tablet — can connect to the internet when you’re away from Wi-Fi, making it ideal for folks who need to be online while working on the road.

HP’s new Chromebook looks pretty slick too, with a sturdy-looking aluminum frame and a detachable magnetic keyboard that comes in both dark gray and navy blue. At about 2.5 pounds, it should be easy enough to toss in your bag and head to work with. Pretty handy.

The HP Chromebook x2 11 is the first Chromebook of its kind with Qualcomm’s new Snapdragon 7c processor, which is specifically built to elevate the kind of connectivity and battery life you might find in an entry-level laptop. In the Chromebook x2 11’s case, that means a rated runtime of 11 hours — a strong claim that we’re looking forward to testing, and one that would make this laptop a true road warrior.

The HP Chromebook x2’s display sounds pretty promising on paper, with an 11-inch, 2160 x 1440 screen that should be ideal for both binge-watching your favorite shows and seeing every important cell of a spreadsheet. The laptop also includes a wireless, rechargeable stylus, should you want to take handwritten notes or just do some drawing and doodling.

You also get a 5-megapixel front-facing webcam for your daily Zoom chats, as well as a sharper 8-megapixel rear-facing camera for snapping photos of the family. And like the Chromebase, the Chromebook x2 features Bang & Olufsen-branded speakers, which we’re eager to test out in everyday use.

The HP Chromebase 21.5 is one of the more unique all-in-one computers we’ve seen, with a rotating display and an attractive fabric-woven speaker that should make it a great centerpiece for everyday family use — especially at that $599 starting price. It won’t be as powerful as, say, the new 24-inch iMac, but it’s also much cheaper (and in some ways, more versatile).

Meanwhile, if you’re looking for a new Chrome PC that works just as well in the living room as it does on the road, the HP Chromebook x2 11 (also starting at $599) is worth taking a look at. Its LTE capabilities will allow you to stay online even when you’re away from Wi-Fi, and it’s detachable design and rich — at least on paper — display should allow it to work well as both a laptop and tablet.

It’s worth noting that these machines run the same Chrome OS software, which is dead simple to use and relies largely on web-based Google apps such as Chrome, Google Drive, YouTube and Meet. You can also download Android apps to these devices via the Google Play Store, as well as stream big titles such as Destiny 2 and Assassin’s Creed Valhalla via the Google Stadia service. You can even pair a Bluetooth controller (such as the Xbox Wireless Controller) to get your game on. Chrome OS isn’t quite as robust as Windows or macOS for serious productivity, but its ease of use and access to key services makes it a good fit for these affordable PCs.