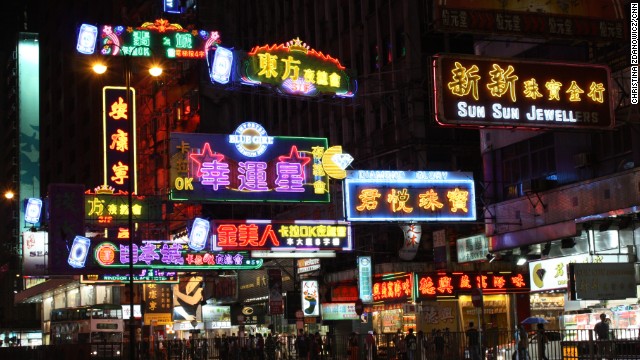 Hong Kong (CNN) — From Hollywood blockbusters to Wong Kar-wai movies, neon signs have been an iconic representation of Hong Kong.

First introduced in the 1920s, these signs flourished in the later half of the 20th century amid the city’s economization. Restaurants, hotels, nightclubs, pawn shops and even mah jong parlors hung up neon lights as a way to advertise they were open for business.

Each sign has been individually made — incorporating Western neon alongside local craft — rather than mass produced in factories.

Now, neon lights are becoming increasingly rare. As the city transformed, businesses recast themselves from manufacturers to service providers, losing out on old traditional industries. Neon has not been an exception.

Inspired by Wong Kar-wai’s Hong Kong-set films like “In the Mood for Love” and “Chungking Express,” Greco photographed neon lights on a Polaroid camera, capturing one vanishing art form through another.

He traveled to Hong Kong for a month each year for eight years, photographing 170 of its neon signs.

“Around 70% of the neon signs in my book don’t exist anymore,” says Greco.

In a city as dense as Hong Kong, neon signs have become inevitable victims of modernization. Old walk-up buildings are being demolished and replaced with skyscrapers. Eventually, a large numbe of old signs have been replaced with safer and more energy-efficient LED lights.

Only a handful of these neon lights have a rare home of being put in storage. Most end up in landfills.

But the crackdown on neon lights may go deeper than purely safety concerns.

Most of the neon signs in Hong Kong depict traditional Chinese characters. Mainland China uses simplified Chinese, which may be playing a factor in the disappearance of Hong Kong’s one-of-a-kind heritage, says Greco.

It’s also a matter of hard work for minimal financial reward. The art takes years to master and requires skilled physical labor. A lot of neon lights artists in Hong Kong have no one to pass their legacy onto.

She estimates that there were more than 400 neon sign artists in Hong Kong at its peak, but now there are only about ten left.

Neon lights masters don’t want their successors to struggle in the now-dying industry like they once did.

“For the longest time, these people actually worked so hard for Hong Kong to create the (city’s) landscape,” Cardin adds. “I think they deserve to be seen. They have been the unsung heroes.”

Neon lights along a street in Kowloon, Hong Kong.

Karen Chan is the founder of both CeeKayEllo, a local art design studio, and HKCRAFTS, a non-profit art organization that fosters local crafts and artists.

She has been studying neon sign techniques since 2019 in hope of keeping the art alive.

The neon light industry is largely male dominated in Hong Kong, making her the only female neon designer and practitioner in the city.

She has also been learning from different neon light artists around the world in the Netherlands, France, Taiwan, the United States and South Korea.

But the 32-year-old says that mastering the craft is no piece of cake. “The physical part is definitely one of my weaknesses,” she said.

From glass bending and blowing to handling gas, neon signs require a lot of attention to detail. “It’s also a matter of practice and muscle memory.”

Even through the struggle, Karen says it’s worth it because she gets to keep such an ingrained and precious part of Hong Kong’s tradition alive.

While neon lights may be tangibly removed, their memories continue to live on among Hong Kong’s residents.