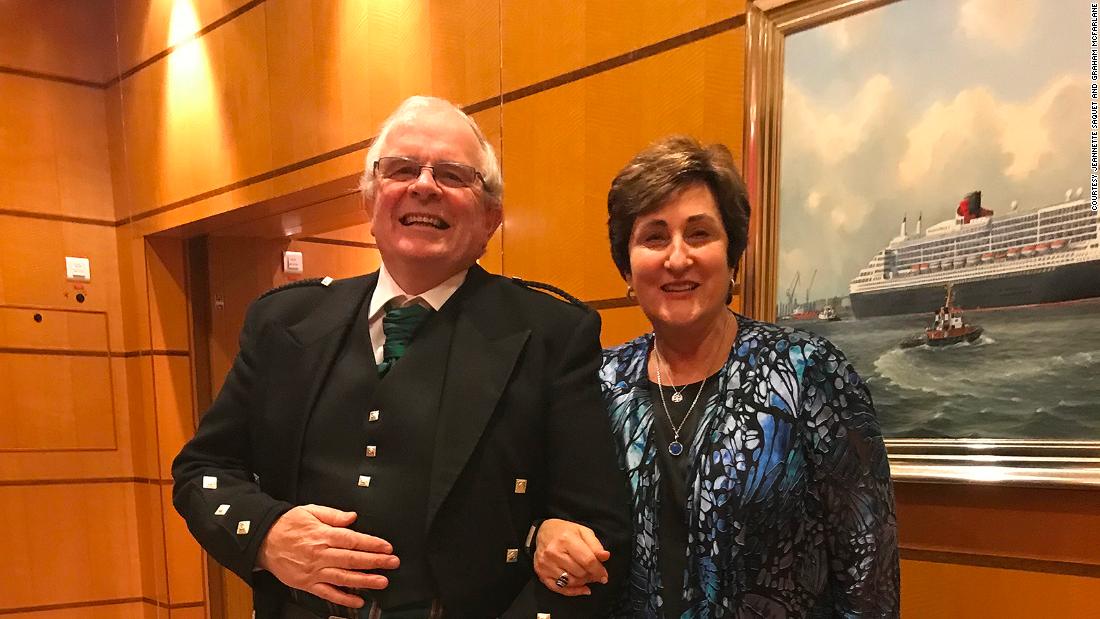 (CNN) — When Jeannette Saquet boarded the Queen Mary 2 ocean liner in January 2017, she was 71, and excited for a new adventure.

Saquet had been divorced and single for a number of years. She enjoyed working for herself, and the freedom it afforded her to travel the world. She also loved throwing dinner parties and socializing with friends, as well as enjoying special moments with her children and grandchildren back home in Michigan.

Saquet had largely put aside any idea of finding romance again, but she lived a happy and fulfilled life.

She was traveling from New York City to Southampton along with her two close friends Eileen and Ray. Her companions were early risers, and on the third day at sea Saquet awoke a little later, and found herself alone at breakfast.

Cruise ships are friendly places, so Saquet had no qualms about sitting at a circular table where seven others were already breakfasting, and introducing herself to the group.

To her left was 68-year-old Scotsman Graham McFarlane, returning to the UK after visiting friends in Florida.

Given the choice, McFarlane always opted to cross the Atlantic via the Queen Mary 2.

McFarlane’s wife had died seven years earlier. Like Saquet, he wasn’t expecting to fall in love again, and was content with his work — he’s a project manager who has worked on buildings across Scotland — and his busy life socializing and spending time with family in his hometown of Forfar, Scotland, north of Dundee.

When Saquet joined the breakfast table that morning, she only said a brief hello to McFarlane, who was already deep in conversation with the man on his left.

But as the group finished up their croissants and downed their last dregs of coffee, McFarlane announced he was off to play bridge.

“My ears perked up,” recalls Saquet.

She was a keen cards player who’d been playing bridge on board the ship with Eileen and another player they’d met on board — and they’d been looking for a fourth.

Saquet asked McFarlane if he’d be up for joining them. He agreed, and the two reconvened that evening for a lively game of cards.

“As it turned out, Graham joined not only the bridge game, but shared meals, walks, evening entertainment and other activities with Ray, Eileen and me,” says Saquet.

Jeannette Saquet and Graham McFarlane at their first formal dinner together on board the Queen Mary 2.

Over the next seven days, as the Queen Mary edged closer to the UK, Saquet and McFarlane spent more and more time together.

“I found Graham to be a most pleasant person and very much enjoyed his company, especially listening to his wonderful Scottish accent,” says Saquet.

McFarlane was charmed by Saquet too — but she didn’t realize quite how much.

“I never imagined anything romantic between us till Eileen informed me after a couple of days, ‘I think he likes you,'” recalls Saquet.

“Then he held my hand. And he had me at holding hands. And I could feel that attraction to him.”

When the Queen Mary 2 docked in Southampton, McFarlane and Saquet went their separate ways. McFarlane was attending to some business in England, then heading back home to Scotland. Meanwhile, Saquet was traveling on to Paris for a vacation with Eileen.

The Scotsman and the American said their goodbyes, but not before swapping email addresses and phone numbers.

“Over the next few weeks, Graham and I exchanged emails which grew longer, more detailed and more frequent,” says Saquet.

When Saquet was back in the US, they switched to FaceTime.

“Our video visits started out weekly, then twice … then three times or more a week. We ended up speaking for about two hours each time,” says Saquet.

The two started planning their days around when they could connect — and their calls only ended when one of them ran out of phone battery.

“Graham was just wonderful to talk to,” says Saquet. “I really liked him as a person. We spoke about a lot of things, some very personal, some very general — you know, the state of the world, and our families, and our backgrounds.”

Saquet also told McFarlane about her next trip — she was heading to Eastern Europe for a few weeks that spring.

“I said to her, ‘Just drop yourself off in Scotland on the way back, it’s just a wee hop,'” recalls McFarlane.

“When he invited me I just thought, ‘Wow, this guy, we can be good friends.’ And I already considered him a friend by then,” says Saquet.

She decided to book a plane ticket.

In May 2017, Saquet flew from Bucharest, Romania, to Edinburgh, Scotland — where McFarlane met her at the airport.

On their way back from the airport, McFarlane suggested they head to see The Kelpies, two spectacular steel equine sculptures in Falkirk, Scotland.

As they marveled at the scale of this artistic representation of these Scottish mythological animals, Saquet realized how comfortable and happy she was.

It was the beginning of a brilliant trip, which Saquet describes as “the best trip ever with the best tour guide ever.”

Saquet and McFarlane explored Scotland together in May 2017. Here they are at Culzean Castle on a later trip.

Over the course of the next 10 days, McFarlane took Saquet to the picturesque bluebell woods and sweeping beaches of Perthshire and showed her round the turreted, imposing Glamis Castle — the home of Shakespeare’s Macbeth.

The two also visited the battlefields of Culloden, the spectacular surrounds of Loch Ness and McFarlane’s home town of Forfar, which he jokes is “the center of the universe, has been for years.”

In Forfar, Saquet met McFarlane’s son and daughter, who also live in the town, and many other friends and relatives. They welcomed her wholeheartedly.

Towards the end of the trip, Saquet and McFarlane traveled north to Achnacarry, which McFarlane describes as “a completely remote Scottish loch, mountains, deer in the garden. It’s just a beautiful place.”

When it was time for Saquet to return to the US, McFarlane promised to visit her soon.

The view from Achnecary, in the Scottish Highlands, where McFarlane took Saquet on her first visit.

And only a few weeks later, he flew to California, bought a motorcycle and drove it to Chicago to visit her.

“I couldn’t believe an old man like me was having that much fun,” says McFarlane.

In Chicago, he reunited with Saquet, and was introduced to her son and his family. Back in Michigan, McFarlane got a taste of Saquet’s American life — and left his US motorcycle in the garage ready for his next visit.

McFarlane and Saquet realized they had very similar priorities in life — they both love to entertain, and always have friends and family members stopping by their warm, welcoming homes.

On Saquet’s first trip to Scotland, the two were frequently invited to dine out with or visit McFarlane’s friends.

Saquet’s circle, meanwhile, were very intrigued to meet the Scotsman she’d met on a ship. When they did, they were quickly charmed, and saw why the two were such a good fit.

Here’s the couple in June 2017, when McFarlane met Saquet in Chicago.

Over the next few years, Saquet and McFarlane spent more and more time together, either visiting one another in Forfar or Michigan, or meeting up in destinations across the world.

For McFarlane’s 70th birthday, they traveled to Paris, staying in an apartment in Montmartre, visiting Parisian friends of Saquet and eating out at the Palais Royale.

They also attended a wedding together in Cyprus, traveled around Malta and toured the Baalbek Roman Ruins in Beirut.

In Italy, they drove a convertible car down to Lake Como. In France, they visited Normandy — where Saquet’s father, who was a soldier in World War II, is buried.

They also returned on board the Queen Mary 2 on three more occasions — the ship holds a special place in their hearts.

“At first it was, he’d come see me for a month, and I’d come here for a month — with maybe a month or two in between,” recalls Saquet.

“But then those visits got longer and longer. And we decided we really enjoyed more being together. So we were pretty much together, if you will.”

Stuck in the US

The couple were enjoying their cross-continental life pre-pandemic.

In March 2020, McFarlane and Sachet reunited in Florida, before returning to Saquet’s home in Michigan.

The two planned to travel back to Scotland together at the end of that month, but as the Covid-19 pandemic worsened in the UK and the US, they realized they couldn’t easily leave.

Over the next 15 months, Saquet and McFarlane remained together in Michigan.

“I am very thankful that during lockdown times that we were at least together rather than stuck in our separate countries,” says Saquet.

As the pandemic confined them to Michigan, McFarlane got involved in community life in Saquet’s hometown, helping with local building projects, and as restrictions eased, spending time with Saquet’s family.

“My grandchildren Morgan and Sydney are in love with Graham,” says Saquet.

It was difficult for McFarlane being away from his loved ones in Scotland, but even though the early days of the pandemic were trying for everyone, Saquet and McFarlane say they’ve never had a heated argument.

“We both are pacifists, and if we disagree on something we agree to disagree,” says Saquet.

McFarlane and Saquet got married in her Michigan backyard in August 2020.

As 2020 rolled on, McFarlane’s tourist visa was close to running out. It seemed likely he’d have to leave the US in the summer, and if he went back to Scotland, the couple didn’t know when they’d next be able to meet.

The thought of months without seeing one another crystallized something for them both.

But they knew they wanted to be together to support one another through the good and bad, with no travel roadblocks.

Towards the end of August 2020, Saquet and McFarlane were married on the back deck of Saquet’s Michigan home, with just her close family members in attendance. Her two sons were the best men, while her grandchildren took on the roles of ring bearer and flower girl.

The couple on their wedding day, which was a small scale affair due to the pandemic.

It was a simple, beautiful ceremony, and while it was tough that their Scottish family couldn’t be there, the two created a video of the day so that far flung family members could share in the joy.

In June 2020, the couple were able to travel back to Scotland and reunite with their loved ones there. They’re intending to stay in the UK for the time being. Long term, they plan to continue splitting their time between the US and Scotland, as well as — when the pandemic allows — go back traveling the world together.

For now, Saquet and McFarlane are enjoying reaquainting themselves with Scotland as the country eases restrictions — they recently enjoyed driving part of the famous North East 500 road route.

The couple, pictured here visiting the Scottish island of Iona, are so pleased to have met one another.

When Saquet and McFarlane met crossing the Atlantic, neither of them were expecting to fall in love again — not to mention falling in love on a cruise ship, with someone from a different country.

But both Saquet and McFarlane were ready to take a chance on an adventure, which they hope inspires others to do the same, whatever their age or stage in life.

“But you know, I’m now 76, he’s 73. And we’re still feeling like a couple of spring chickens here and enjoying life.”

McFarlane and Saquet bonded over bridge, and they still love to play cards together, as well as spending their evenings chatting and planning future adventures.

They reckon their relationship works because they’re such good friends.

“We are still the best of pals, and very much in love,” says McFarlane.