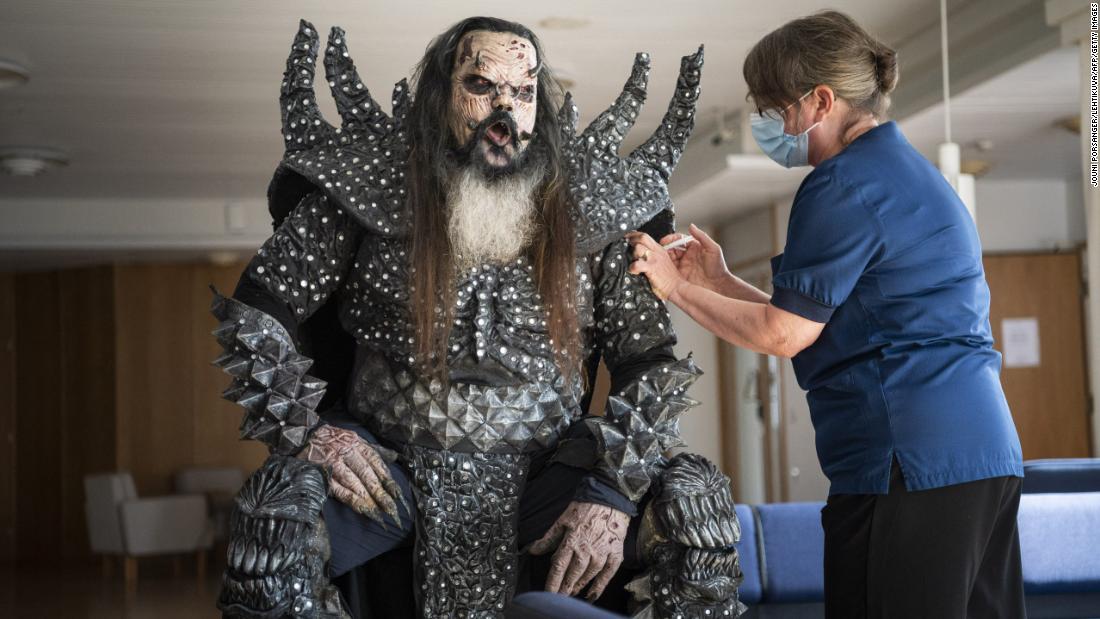 US gymnast Simone Biles is congratulated by coach Cecile Canqueteau-Landi as it became evident that Biles would win an Olympic medal in the balance beam final on Tuesday, August 3. Biles had pulled out of several events earlier in Tokyo, citing mental health concerns. Specifically, she said she had “the twisties,” a mental block in gymnastics where competitors lose track of their positioning midair. But she bounced back with a bronze medal in the balance beam and tied Shannon Miller for the most Olympic medals ever won by an American gymnast. Robert Gauthier/Los Angeles Time/Shutterstock
People in Albany, New York, watch a video of New York Gov. Andrew Cuomo on Tuesday, August 3. A report released Tuesday by New York Attorney General Letitia James said that Cuomo sexually harassed 11 women and created a “hostile” work environment for women. The governor denied the allegations. “I want you to know directly from me that I never touched anyone inappropriately or made inappropriate sexual advances,” he said. Cindy Shultz/The New York Times/Redux
Workers prepare to move Covid-19 victims outside the morgue of Thammasat University Hospital, which is in Thailand’s Pathum Thani province just north of Bangkok, on Wednesday, August 4. Thailand is struggling to contain its worst wave of the Covid-19 pandemic, with hospitals in Bangkok becoming overwhelmed by a surge in cases and demand for beds greatly outstripping capacity. Lillian Suwanrumpha/AFP/Getty Images

Tomi Petteri Putaansuu, aka Mr. Lordi of the hard-rock band Lordi, gets his second shot of a Covid-19 vaccine from nurse Paula Ylitalo in Rovaniemi, Finland, on Sunday, August 1. Jouni Porsanger/Lehtikuva/AFP/Getty Images

US President Joe Biden, speaking in front of a painting of George Washington, responds to a reporter’s question after a White House news conference on Tuesday, August 3. Tom Brenner/The New York Times/Redux

Huan Huan the panda holds one of her newborn cubs at the Beauval Zoo in Saint-Aignan, France, on Monday, August 2. She gave birth to female twins. Eric Baccega/Beauval Zoo/AP

Housing advocates protest outside the office of New York Gov. Andrew Cuomo on Wednesday, August 4. The US Centers for Disease Control and Prevention issued a fresh stop on certain evictions Tuesday, saying that evicting people could be detrimental to public health and would interfere with efforts to slow the pandemic. The resolution stops short of another nationwide eviction freeze; it’s more limited in scope, targeting places with high spread of Covid-19. Brittainy Newman/AP

Kristina Timanovskaya, an Olympic sprinter from Belarus, boards a flight in Narita, Japan, on Wednesday, August 4. She flew to Poland, where she has been granted a visa on humanitarian grounds. Timanovskaya was set to compete Monday at the Tokyo Olympics, but she said team officials tried to force her back to Belarus after she criticized sporting authorities. The Belarus National Olympic Committee said Timanovskaya was withdrawn from the Games due to her “emotional and psychological state.” Timanovskaya refuted that claim, saying no doctors had examined her and that she had no health problems or mental issues. The International Olympic Committee has launched a formal investigation into the incident. Kim Kyung-Hoon/Reuters
British diver Tom Daley, who has a whole Instagram account devoted to his hobby of knitting and crochet, works on a new creation while watching the women’s 3-meter springboard final on Sunday, August 1. On his Instagram Stories, he revealed he was making a “jumper,” or sweater, for a French bulldog. Daley, who won a gold medal last week in the synchronized 10-meter platform event, picked up the hobby during the pandemic. Joe Giddens/PA Images/Getty Images
US Rep. Cori Bush, a freshman congresswoman from Missouri, wipes away tears on Tuesday, August 3, after the Biden administration announced a 60-day eviction ban in areas of the country with high or substantial transmission of Covid-19. Bush had been sleeping on the US Capitol steps to protest a lapse in the federal eviction moratorium. Evelyn Hockstein/Reuters
Thousands of people demonstrate in Beirut, Lebanon, on Wednesday, August 4, a year after a massive explosion killed more than 200 people near the city’s port. There are still many unanswered questions about what led to the tragedy, and there has been no sense of closure in the 12 months since the explosion. Abd Rabbo Ammar/Abaca Press/Reuters
US gymnast Simone Biles competes in the balance beam final on Tuesday, August 3. She won the bronze in her much-anticipated return to competition. “It’s been a very long week, a very long five years,” Biles said after the competition. “I didn’t expect to medal today. I just wanted to go out and do it for me, and that’s what I did.” Elsa/Getty Images

A model of the sun is seen behind people visiting the Shanghai Astronomy Museum in Shanghai, China, on Friday, July 30. Hector Retamal/AFP/Getty Images

People receive Covid-19 vaccinations at a sports arena in Nanjing, China, on Monday, August 2. The Delta variant, which has been wreaking havoc across the world, is causing China’s worst outbreak in months. Li Bo/Xinhua/AP

Qatar’s Mutaz Essa Barshim, left, and Italy’s Gianmarco Tamberi share the podium during an Olympic medal ceremony on Monday, August 2. They agreed to share the gold medal in high jump after they both cleared 2.37 meters but failed to clear 2.39. Beside them is bronze medalist Maksim Nedasekau of Belarus. No one was given a silver medal. Dylan Martinez/Reuters
Shontel Brown celebrates Tuesday, August 3, after she was projected to win the Democratic Party’s special primary in Ohio’s 11th Congressional District. Brown, a member of the Cuyahoga County Council, is now the heavy favorite to win the special election to replace former US Rep. Marcia Fudge, who resigned to become the US secretary of housing and urban development. Stephen Zenner/SOPA Images/Sipa USA/AP
Vehicles damaged by recent flooding are piled up at a collection site in Bad Neuenahr-Ahrweiler, Germany, on Monday, August 2. Thomas Frey/picture alliance/dpa/Getty Images

A member of the German organization Sea-Watch helps a man board a helicopter after migrants were rescued from two boats in the western Mediterranean Sea on Monday, August 2. Darrin Zammit Lupi/Reuters

During the Olympic medal ceremony for the women’s shot put, the United States’ Raven Saunders lifted her arms above her head and made an X with her wrists on Sunday, August 1. When the silver medalist was asked what the gesture meant, she explained that “it’s the intersection of where all people who are oppressed meet.” Saunders has been outspoken in the past about her desire to destigmatize mental health. “Shout out to all my Black people. Shout out to all my LGBTQ community. Shout out to all my people dealing with mental health,” she said. “At the end of the day, we understand it’s bigger than us and it’s bigger than the powers that be.” Francisco Seco/AP

Jamaican sprinter Elaine Thompson-Herah, right, crosses the finish line to win the 100-meter dash at the Tokyo Olympics on Saturday, July 31. Finishing in second and third were fellow Jamaicans Shelly-Ann Fraser-Pryce and Shericka Jackson. Thompson-Herah later won the 200 meters as well, making her the first-ever woman to win the 100 and 200 at consecutive Olympic Games. Morry Gash/AP

A flamingo stands among flamingo chicks inside a pen in Aigues-Mortes, France, on Tuesday, August 3. Pascal Guyot/AFP/Getty Images

While hosting a virtual meeting with governors on Friday, July 30, US President Joe Biden holds a card that read, “Sir, there is something on your chin.” An aide had handed Biden the card earlier in the meeting, and the President was using the other side of it to take notes. Andrew Harnik/AP

Gardener Gemma Hearn poses for photographs Friday, July 30, while making a final trim of the Hampton Court Maze before it reopened to the public in London. The maze, which was first planted in 1689 and is the oldest hedge maze in Britain, reopened to visitors after being closed since March 2020. Matt Dunham/AP

The Rev. Jesse Jackson was among hundreds who were arrested while protesting outside the US Capitol on Monday, August 2. They were protesting for Congress to protect voting rights, end the filibuster and raise the minimum wage to $15 an hour, according to The Washington Post. Michael Nigro/Sipa USA/AP
The United States’ Ryan Crouser shows a message for his grandfather after winning gold in the shot put on Thursday, August 5. Crouser, who also won gold at the 2016 Games, set a new Olympic record with a throw of 23.30 meters. It’s the second-longest throw in history. Andrew Boyers/Reuters
Smoke drifts over a hotel complex as a massive forest fire burns near the town of Manavgat, Turkey, on Thursday, July 29. Turkey is fighting dozens of wildfires that have been fueled by scorching summer temperatures and conditions that experts say have been worsened by climate change. Ilyas Akengin/AFP/Getty Images

Boston’s Enrique Hernandez is pushed through the dugout in a cart after hitting a home run in Detroit on Wednesday, August 4. Paul Sancya/AP

Australia’s Keegan Palmer warms up prior to the Olympic competition in park skateboarding on Thursday, August 5. Palmer went on to win gold in the event. This is the first year that skateboarding has been an Olympic sport. Ezra Shaw/Getty Images

A person makes adjustments to a hot-air balloon before takeoff in Bristol, England, on Wednesday, August 4. The Fiesta Fortnight event is featuring hundreds of hot-air balloons taking off from multiple locations across the city. Finnbarr Webster/Getty Images

US Rep. Marjorie Taylor Greene removes her mask dramatically while crossing from the House side of the US Capitol, where masks are required, to the Senate side, where they are not, on Friday, July 30. The House had just reinstated its mask mandate. Jim Lo Scalzo/EPA-EFE/Shutterstock
People enjoy a ride at an amusement park in Santiago, Chile, on Friday, July 30. The Chilean government recently eased Covid-19 restrictions after a drop in cases. See last week in 37 photos Javier Torres/AFP/Getty Images