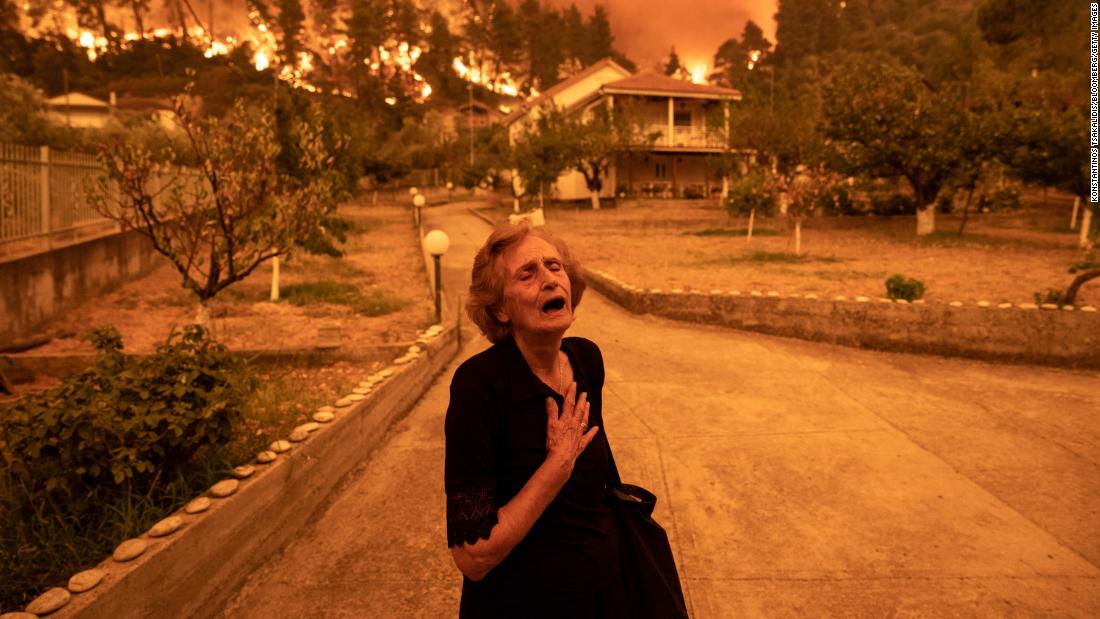 New York Gov. Andrew Cuomo prepares to board a helicopter after he announced his resignation on Tuesday, August 10. The announcement came a week after New York Attorney General Letitia James released a report that said Cuomo had sexually harassed 11 women and created a “hostile” work environment for women. Cuomo has denied all of the allegations, saying he never touched anyone inappropriately, but he acknowledged that some of his behavior made others uncomfortable. Seth Wenig/AP
Italy’s Filippo Tortu, bottom, finishes ahead of Great Britain’s Nethaneel Mitchell-Blake by just .01 seconds to win Olympic gold in the 4×100-meter relay on Friday, August 6. The Summer Olympics, which ended on August 8, produced amazing performances and some unforgettable moments. See the best photos from the Tokyo Olympics Jewel Samad/AFP/Getty Images
Anne Marie Baker, a nurse at the Children’s Hospital of San Antonio, disinfects the room of a teenager who had just died from Covid-19 on Tuesday, August 10. With lagging vaccination rates and the spread of the more transmissible Delta variant, Texas and some other states are seeing a surge in Covid-19 cases. Meridith Kohut/The New York Times/Redux
Soccer star Lionel Messi bids a tearful farewell to FC Barcelona on Sunday, August 8. He spent more than 20 years at the Spanish club, winning 10 La Liga titles and four Champions League titles. He also won the Ballon d’Or six times and is the club’s all-time leading goalscorer. Messi will now play for Paris Saint-Germain after signing a two-year deal. Marc Gonzalez Aloma/Europa Press/Getty Images
Yoán Moncada, a third baseman with the Chicago White Sox, holds corn in his hands before the “Field of Dreams” baseball game in Dyersville, Iowa, on Thursday, August 12. It was the first official Major League Baseball game in the state of Iowa, and it was played on a specially built field next to the original “Field of Dreams” movie site. Jose M. Osorio/Chicago Tribune/TNS/ZUMA

Robert Durst, the eccentric millionaire subject of the HBO crime documentary “The Jinx,” testifies in his own defense Monday, August 9, as he stands trial for murder in Inglewood, California. Durst once again denied killing his close friend and confidante Susan Berman, and he said he did not know who killed her. Gary Coronado/Los Angeles Times/Pool/AP

Boys and local boatmen play atop a submerged structure at Daraganj Ghat, one of the flooded banks of the Ganges River in Prayagraj, India, on Sunday, August 8. Sanjay Kanojia/AFP/Getty Images

US basketball player Sue Bird is congratulated by her partner, soccer star Megan Rapinoe, after the Americans won Olympic gold on Sunday, August 8. Bird and teammate Diana Taurasi each have five Olympic gold medals. Tim Clayton/Corbis/Getty Images
A police officer reminds people to observe social distancing as they line up for a Covid-19 vaccine in Las Piñas, Philippines, on Sunday, August 8. Coronavirus cases have been rising in the Philippines since July, driven by the highly infectious Delta variant. Ezra Acayan/Getty Images

Morgan Tucker carries her 2-year-old son, Zaydek Carpenter, off the field during a Major League Soccer game in Cincinnati on Saturday, August 7. Tucker had to chase down Zaydek after he slipped away and ran onto the field during play. Sam Greene/The Enquirer/USA Today Network

Goats graze in Ronda, Spain, on Wednesday, August 11. Some gathered in the shade of a tree as the country is in the midst of a heat wave. Jon Nazca/Reuters

Senate Majority Leader Chuck Schumer delivers remarks during a news conference at the US Capitol on Wednesday, August 11. Senate Democrats approved a $3.5 trillion budget resolution that morning. It sets the stage for the party to craft and attempt to pass a sweeping economic package, expanding the social safety net that President Joe Biden has made a signature agenda item. Tom Brenner/The New York Times/Redux
Germany’s Annika Schleu was leading the modern pentathlon after two events at the Tokyo Olympics. But in the show jumping event on Friday, August 6, her horse refused to cooperate with her wishes. The horse, Saint Boy, just wouldn’t jump, and Schleu broke into tears as her medal hopes faded away. In the modern pentathlon, horses are assigned to athletes via a draw. Marijan Murat/Picture Alliance/Getty Images
A right-wing protester points a weapon at journalist Justin Yau, who was covering clashes between right-wing protesters and anti-fascist protesters in Portland, Oregon, on Sunday, August 8. Police later determined the weapon to be an airsoft gun, according to The Oregonian, but that was not known at the time it was aimed at Yau. The toy replica guns shoot plastic pellets and are designed to be nonlethal. Nathan Howard/Getty Images
The United States’ Allyson Felix celebrates after winning the bronze medal in the 400 meters on Friday, August 6. She passed Jamaica’s Merlene Ottey to stand alone as the most decorated woman in Olympic track-and-field history. David Ramos/Getty Images

Joan Bronson is treated for Covid-19 at the Ochsner Medical Center in Jefferson Parish, Louisiana, on Tuesday, August 10. Louisiana is among the states seeing a surge in new coronavirus cases. Kathleen Flynn/Reuters

A Russian artistic swimmer competes in the team event at the Tokyo Olympics on Saturday, August 7. Russian swimmers won gold in both the team and duet events. Marko Djurica/Reuters

Jets conduct a flyover next to the Eiffel Tower in Paris on Sunday, August 8. While the Olympic closing ceremony was held in Tokyo, a celebration was held in Paris. The French capital will be hosting the next Summer Games in 2024. Aurelien Meunier/Getty Images

A Rohingya refugee is vaccinated at a refugee camp in Cox’s Bazar, Bangladesh, on Thursday, Augsut 12. Allison Joyce/Getty Images

A pedestrian poses for a picture by London’s Tower Bridge as it was stuck in an open position due to a “technical failure” on Monday, August 9. Tolga Akmen/AFP/Getty Images

Feathers from a grouse float in the air during the opening day of the grouse shooting season in Longformacus, Scotland, on Thursday, August 12. Scott Heppell/Reuters

The Olympic cauldron closes, extinguishing the Olympic flame at the end of the closing ceremony on Sunday, August 8. Maxim Shemetov/Reuters

Thirteen sets of twins due to start the new school year pose for a photo at St. Mary’s Primary School in Greenock, Scotland, on Wednesday, August 11. Jane Barlow/PA Images/Getty Images

Alina Harnasko, a rhythmic gymnast from Belarus, competes in the individual all-around event at the Olympics on Friday, August 6. She finished with a bronze medal. Ashley Landis/AP

This aerial photo shows a wildfire-affected area in Mugla, Turkey, on Wednesday, August 11. A summer of record-setting heat in southern Europe has set off devastating wildfires that have torn through forests and homes and destroyed vital infrastructure from Turkey to Spain. Omer Urer/Anadolu Agency/Getty Images
New York Lt. Gov. Kathy Hochul, who will succeed Andrew Cuomo as governor upon his promised resignation, is seen at a news conference in Albany, New York, on Wednesday, August 11. Hochul, a Buffalo native who is poised to become the state’s first female governor, insisted that she had not been previously aware of the allegations against Cuomo. She also vowed to clean house in the executive chamber. Gabriela Bhaskar/The New York Times/Redux
Fireworks explode over Tokyo’s National Stadium at the end of the Olympics’ closing ceremony on Sunday, August 8. The word “arigato,” seen at left, means thank you in Japanese. See last week in 40 photos Abbie Parr/Getty Images