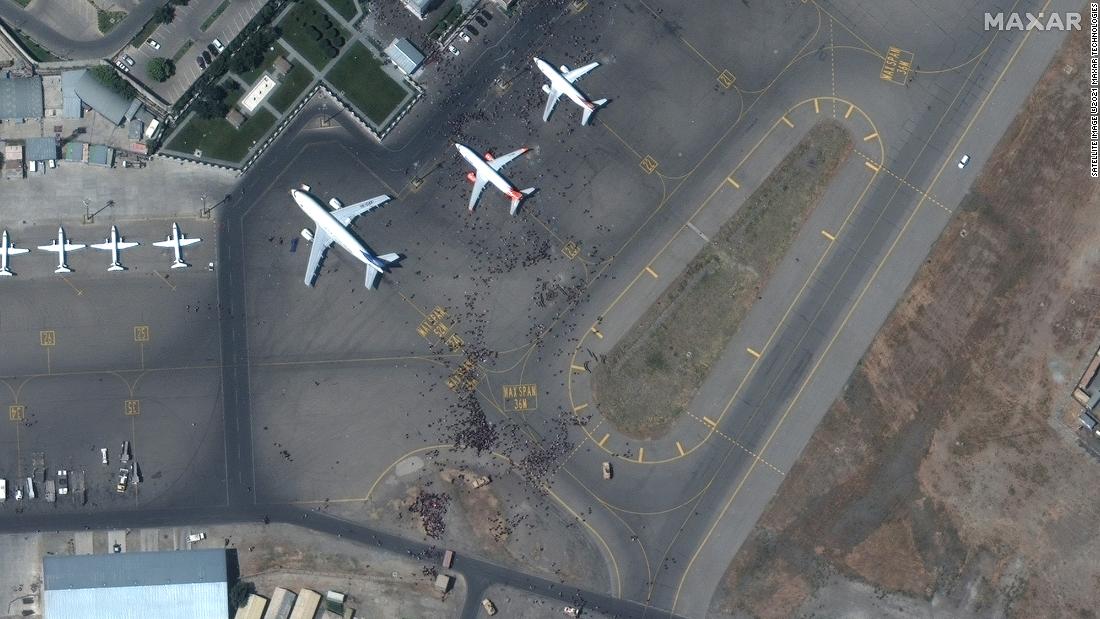 Ryan asked to have the publications’ “204 journalists, support staff and families transported by US Military from the civilian side of the Kabul airport to the military side of the airport where they can be safe as they await evacuation flights.”

“They are currently in danger and need the US government to get them to safety,” Ryan wrote. “Please advise as to how best to proceed.”

Later in the day, The Times published a separate group statement signed by the publishers of each of the three papers and addressed specifically to Biden. The statement asks the President for protected access for their Afghan colleagues to a US-controlled airport, safe passage through a protected access gate and facilitated air movement out of Afghanistan.
Satellite images have shown significant crowds of people and traffic jams near the Kabul International Airport and at the tarmac. Witnesses at Hamid Karzai International Airport told CNN that thousands of people were there hoping to board flights out of the country.

Almar Latour, CEO of Dow Jones and Company and publisher of The Journal, echoed the urgency of Ryan’s plea for help in a statement to CNN.

“We can’t overemphasize the urgency of the situation,” Latour said. “Right now we are focused on seeking safe passage for our Afghan colleagues and their families who even now are bearing witness to events on the ground. We need the immediate support of the US government in bringing them to safety.”

The Committee to Protect Journalists’ Executive Director Joel Simon recently made a case for helping the Afghan journalists “who do the lion’s share of the reporting for international news organizations, which have shrunk their bureaus as the American presence has diminished.”

“[U]nless the U.S. government intervenes to bring them to safety, an entire generation of reporters will be lost,” Simon wrote in an op-ed in The Washington Post last week.
Last month, the CPJ and US media organizations asked the Biden administration for humanitarian assistance and emergency visas for Afghan journalists. Signers of that July 20 letter included The Post, The Journal’s parent company Dow Jones and The Times as well as CNN.

“It is appalling that despite timely efforts to secure the safety of these local journalists who made so much of that reporting possible, they are being left to fend for themselves,” Gypsy Guillén Kaiser, the CPJ’s advocacy and communications director, said in a statement to CNN.

The National Security Council and the White House did not immediately respond to CNN’s requests for comment. Biden said in a speech from the White House East Room Monday that the US is “expanding refugee access to cover other vulnerable Afghans who worked for our embassy, US non-government agencies, or US non-governmental organizations and Afghans who otherwise are at great risk in US news agencies.