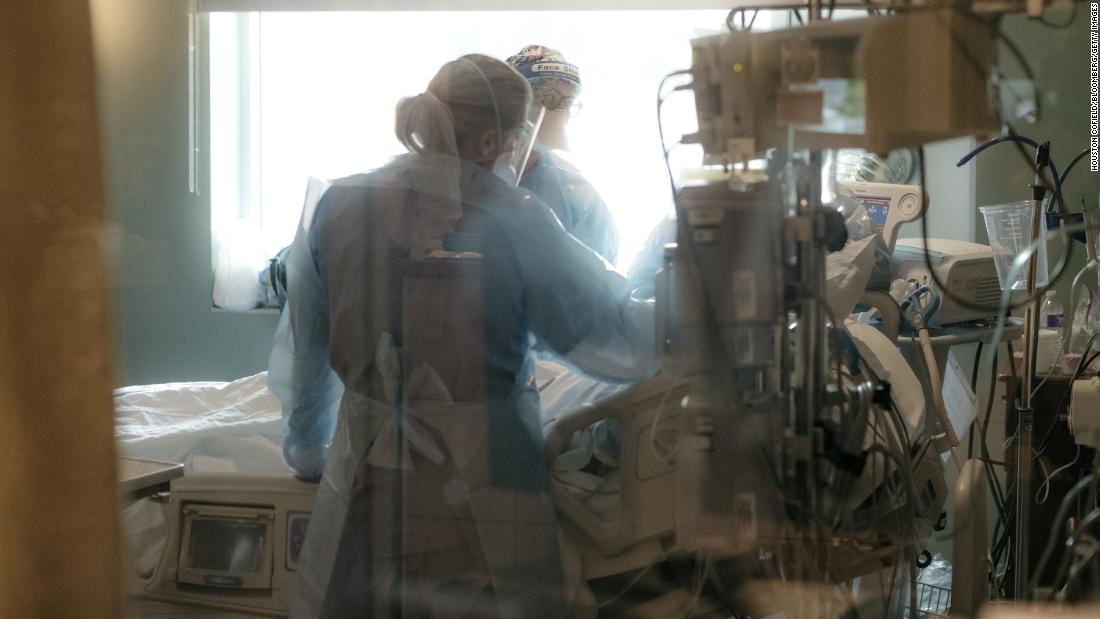 The increase in pediatric cases is alarming some school officials, although one health expert said Wednesday that the best way to turn the corner was to keep taking the pandemic seriously.

“We’re in the same storm, but we’re not in the same boat. Some of us are in yachts. We have resources. We can work from home, we’re immune-competent, we have access to a vaccine — and some of us are in rafts,” Dr. Dimitri Christakis, director of the Center for Child Health, Behavior and Development at Seattle Children’s Hospital, told CNN’s Don Lemon.

“All of us need to do all we can do to help those in less sturdy crafts, and that means getting vaccinated as soon as you can and masking up according to the CDC guidelines,” he said.

As part of a fresh drive to increase awareness, President Joe Biden is expected to deliver a major address Thursday afternoon on what is needed in the months ahead. While Biden has encouraged businesses to require vaccines for workers, officials said they believe there is more the private sector can do to encourage people to get the shot. That includes requiring proof of vaccination at restaurants, bars and other venues.

“People in this country have no appreciation of how fortunate we are and how easily we could return to some level of normalcy if everybody would just do their part, and I think it is unfortunately going to take sticks because we’re all out of carrots,” Christakis said.

Children now represent more than a quarter — or 26.8% — of weekly Covid-19 cases nationwide, according to data released Tuesday from the American Academy of Pediatrics (AAP), which is a five-fold increase from a month ago.
“After declining in early summer, child cases have increased exponentially, with over 750,000 cases added between August 5 and September 2,” the AAP’s data said.

As educators and students navigate a changing landscape, some schools and colleges are returning to online learning after a wave of infections.

Georgia’s fourth-largest school system, Fulton County Schools, transitioned one of its middle schools to remote learning “based on a high volume of positive cases and direct contacts,” according to the school system Wednesday.

Connecticut College in New London announced Tuesday that all classes and athletic activities would be temporarily canceled, according to an alert posted by the college. Remote learning has been instituted and will be reassessed in seven to ten days.

Christakis noted that if more people were vaccinated and wore masks, he did not feel it should be necessary to keep students out of schools for months. “We’ve already made our children pay an incredibly unfair price for this epidemic,” he said.

Along with an increase in Covid-19 infections, the rise in hospitalizations continues in hotspots throughout the nation.

In Idaho, the Department of Health and Welfare activated its Crisis Standards of Care in the northern part of the state Tuesday due to what it called “a massive increase in patients with Covid-19 who require hospitalization.”

Crisis Standards of Care are guidelines when there is concern that hospitals may be running short on traditional resources, such as hospital beds.

“We have reached an unprecedented and unwanted point in the history of our state,” said Gov. Brad Little in a written statement. “We have taken so many steps to avoid getting here, but yet again we need to ask more Idahoans to choose to receive the Covid-19 vaccine.”

“Crisis standards of care is a last resort,” said Department of Health and Welfare director Dave Jeppesen. “It means we have exhausted our resources to the point that our health care systems are unable to provide the treatment and care we expect.”

In Arkansas, only 23 ICU beds remain, according to Gov. Asa Hutchinson, who pointed to data that showed 91.5% of those hospitalized and 90% of reported Covid-19 deaths were among those not fully vaccinated.

In West Virginia, Gov. Jim Justice on Wednesday said hospitals in the state “are still overwhelmingly inundated with cases of people that are not vaccinated.”

The state currently has 813 people hospitalized and reached an all-time high of 252 Covid-19 patients in the ICU on Wednesday, Justice said, with a record 132 patients on ventilators.

As of Wednesday, the state has “68 school outbreaks in 31 counties, (while) 10 schools and one entire county, Clay, are closed due to Covid,” said the governor.

“We just need to use good sense, and get ourselves vaccinated, and then we’ll stop this,” he said.

In order for the Covid-19 pandemic in the US to end, preemptive vaccination remains the key, US Surgeon General Dr. Vivek Murthy told CNN’s Jim Acosta on Wednesday.

Approximately 53.3% of all Americans are fully vaccinated, according to CDC data. The current 7-day average of vaccinations initiated dropped 18% from last week, although this may be due to the Labor Day holiday weekend and could rise again in the days ahead.

When asked whether Americans who refuse to get vaccinated will perpetuate the pandemic, Murthy said, “We live with a number of respiratory viruses, including the common cold, and we’re able to manage with it. What’s different from those viruses and Delta is that they don’t cost us the types of numbers that we see in terms of lives lost, in terms of hospitalizations.”

Murthy said through vaccinations as well as other safety measures in places including schools, the US can lower its current Covid-19 case and hospitalization numbers.

“We know what steps to work to reduce risk within schools,” Murthy said. “We know that universal masking helps. We know that regular testing works. We know that distancing whenever possible is useful. We know keeping kids home from school when they’re sick helps as well.”