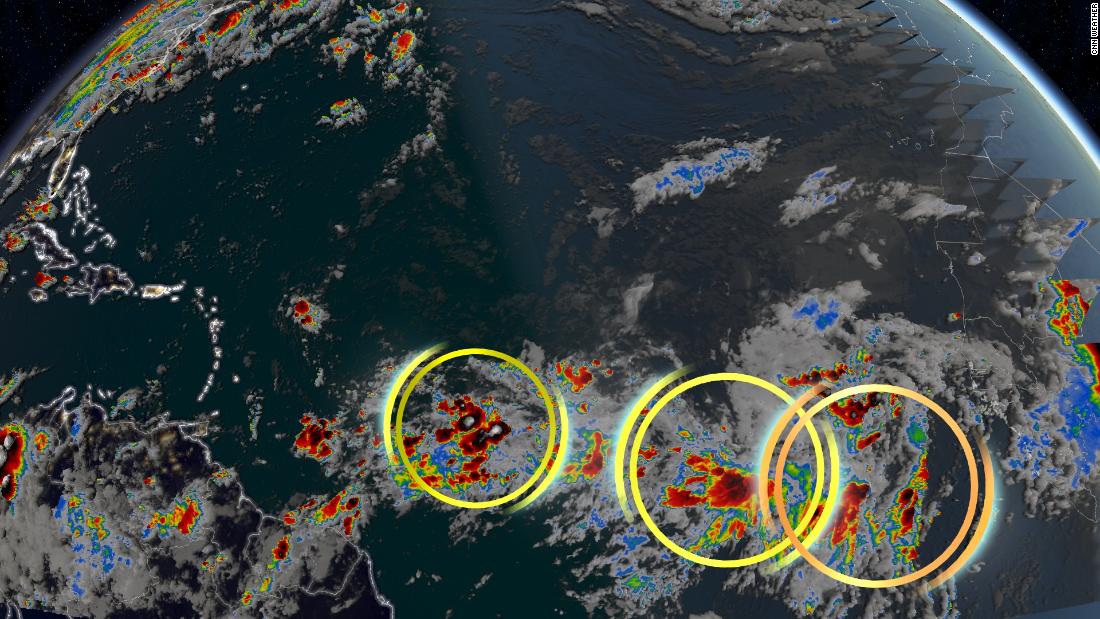 There are currently three different tropical disturbances in the Atlantic Ocean. Each has the potential for development this weekend into early next week.

The season started off very busy, reaching five named storms earlier than any previous season on record. Elsa was named on July 1. On average, the fifth named storm of the season doesn’t typically form until the end of August. The previous record was set last year when Tropical Storm Edouard formed on July 6, 2020.

However, it has been nearly a month since the last advisory was issued for a tropical system in the Atlantic — July 9 for Hurricane Elsa.

While we haven’t had a named storm in the Atlantic in four weeks, with the vast majority of July being relatively quiet, that is not, however, a precursor of the rest of the season.

In recent weeks, the tropical Atlantic has been relatively quiet, in large part due to dry air and dust from the Saharan desert limiting storm development. In fact, the month of July is one of the least active months of hurricane season.

Now, we approach the season within the season. The majority of storms occur from mid-August to mid-October.

“A mix of competing oceanic and atmospheric conditions generally favor above-average activity for the remainder of the Atlantic hurricane season, including the potential return of La Nina in the months ahead,” said Matthew Rosencrans, lead seasonal hurricane forecaster at NOAA’s Climate Prediction Center.

The forecast calls for a busy season

Before the season officially began on June 1, entities like the National Oceanic and Atmospheric Administration (NOAA), Colorado State University (CSU), and others issued forecasts for the upcoming season. NOAA and CSU called for an above average season.

Neither of these jumps are large, but it is an indication that the lull in July will not have an impact on the remainder of the season.

“The correlation between July Atlantic hurricane activity and the rest of the season is quite low,” Phil Klotzbach, a research scientist at CSU. Generally, early season activity (e.g., before August) doesn’t correlate with the remainder of the season’s activity.”

Klotzbach cautions that there is a slight exception that rule. If hurricane activity occurs in the tropics prior to August, that could in fact be a precursor to a very active season.

“When the activity occurs in the tropics (south of 23.5°N), that is typically a harbinger of a very active season,” Klotzbach said. “Hurricane Elsa formed in the tropical Atlantic and then tracked into the eastern Caribbean (10-20°N, 75-60°W) at hurricane strength.”

Those six years have something else in common — they were all categorized as hyperactive hurricane seasons. The NOAA definition of a hyperactive season is an ACE of 160 or greater.

ACE stands for “accumulated cyclone energy.” It is the metric used by meteorologists to account for both a storm’s strength and how long the storm lasts. Typically, the more ACE there is in a single hurricane season, the more active the season is.

“While we’re almost halfway in terms of calendar days into the hurricane season by August 20, ~85% of ACE occurs after August 20,” Klotzbach said.

One reason in particular scientists are looking for the uptick expected in the next few weeks: warm sea surface temperatures.

While Atlantic sea surface temperatures are not expected to be as warm as they were during the record-breaking 2020 season, they are still above average. They are also only one ingredient that fuels tropical systems. Other ingredients such as reduced vertical wind shear and an enhanced west Africa monsoon are also forecast to contribute to an increase in seasonal hurricane activity this year.

In July, the Climate Prediction Center issued a La Niña watch, indicating conditions are favorable for La Niña to potentially emerge during the September-November season.

“Now is the time for families and communities to ensure their preparations are in place,” said National Weather Service Director Louis W. Uccellini. “These storms can be devastating, so be prepared for all possible outcomes by staying tuned to the forecast and following safety information and possible evacuation notifications issued by emergency officials.”