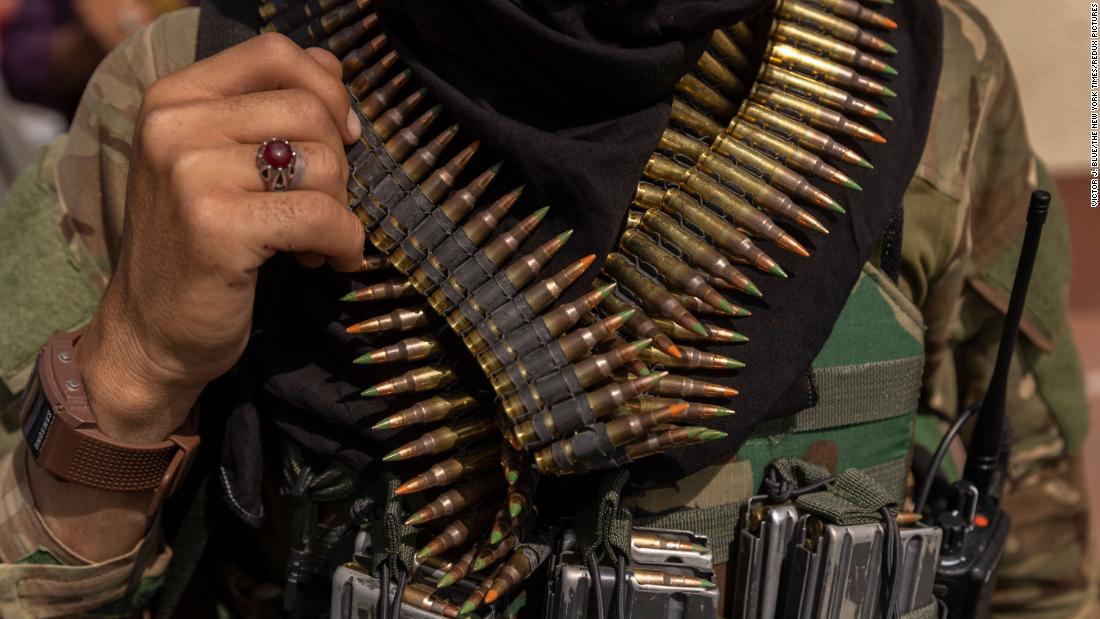 In the February 2020 agreement reached with the US in Doha, the Taliban pledged to prevent al Qaeda and other terror groups from using Afghan soil. Last week, Taliban spokesman Zabihullah Mujahid repeated the promise. “No death will be caused to anyone outside of Afghanistan … we will not allow anyone to use Afghanistan against them.”

In recent years, the Taliban has kept al Qaeda in check. Edmund Fitton-Brown, who leads the United Nations Monitoring Team on Afghanistan, noted in an interview with CTC Sentinel 2019 that the Taliban had “shown an iron self-discipline in recent years in not allowing a threat to be projected outside the borders of Afghanistan by their own members or by groups who are operating in areas they control.”

Western — and not only Western — intelligence agencies worry that discipline may begin to fray, for a variety of reasons. For a start, the Doha process is dead; facts on the ground mean the Taliban don’t need to play nice. There is continuing evidence of close ties between the Taliban and al Qaeda affiliates. The Haqqani Network, which straddles both groups, is now highly influential in Kabul. And as they emptied out prisons across Afghanistan, Taliban fighters set free hundreds of al Qaeda operatives.

US President Joe Biden has argued that the threat from al Qaeda has metastasized to places like Africa and Yemen. “There’s a greater danger from ISIS and al Qaeda and all these affiliates in other countries by far than there is from Afghanistan,” he said last week.

Senior military officers seem less convinced. The chairman of the Joint Chiefs of Staff, General Mark Milley, acknowledged in a recent briefing, according to a US Senate aide, that groups like al Qaeda could reconstitute in Afghanistan in less than the two years previously estimated by the defense officials.

Al Qaeda’s leadership and ideological core remains in the mountains along the Afghan/Pakistan border. The US Defense Department said last year that al Qaeda’s affiliate in the region, al Qaeda in the Indian Subcontinent (AQIS), “maintains close ties to the Taliban in Afghanistan, likely for protection and training.”

That analysis was supported by the UN Monitoring Team on Afghanistan, who reported in June that “large numbers of Al-Qaida fighters and other foreign extremist elements aligned with the Taliban are located in various parts of Afghanistan,” estimating that the terror group has a presence in 15 of the country’s 34 provinces.

The report added that “Al-Qaida maintains contact with the Taliban but has minimized overt communications with Taliban leadership in an effort to ‘lay low.'”

Even so, Raffaello Pantucci, a senior associate fellow at the Royal United Services Institute in London, says, “The idea that the Taliban would simply jettison such supporters after a glorious victory handed to them by God seems to miss a pretty fundamental point about the organization.”

The same applies to the Haqqani Network, which has several high-profile positions among the Taliban leadership. The UN report said that “contacts between al-Qaida and the Haqqani Network—including the Taliban’s deputy leader, Sirajuddin Haqqani—remain particularly close. They share long-standing personal relationships, intermarriage, a shared history of struggle and sympathetic ideologies.”

It is difficult to see these being shredded now that the Haqqanis are so influential in Kabul.

Prominent among them is Khalil al-Rahman Haqqani, seen last weekend meeting elders from across Afghanistan. Based at the Interior Ministry, he has been involved in negotiations with the Taliban’s opponents in the Panjshir Valley and has become an important powerbroker in Kabul.

The US Rewards for Justice program has a $5 million reward for his apprehension, saying he “has also acted on behalf of al-Qaida and has been linked to al-Qaida terrorist operations.”
Asked by Pakistani journalist Azaz Syed this week whether the Taliban could offer reassurances to neighboring countries about militant groups on Afghan soil, Haqqani would only say: “We want peace among all the Muslim countries, my advice is peace.”

One question is to what extent US intelligence gathering in Afghanistan will be impaired now that it has no presence on the ground.

President Biden has downplayed the risk, saying on August 16: “We’ve developed counterterrorism over-the-horizon capability that will allow us to keep our eyes firmly fixed on the direct threats to the United States in the region.”

But there’s no substitute for eyes and ears on the ground , whatever satellite and surveillance technology offers.

US Defense Department spokesman Admiral John Kirby said last week the US did not think the number of al Qaeda fighters in Afghanistan was exorbitantly high but cautioned that “our intelligence-gathering ability in Afghanistan isn’t what it used to be because we aren’t there in the same numbers that we used to be.”

CIA Director William Burns had testified before Congress earlier this year that neither ISIS nor al Qaeda in Afghanistan had the capability to launch attacks inside the United States but said “when the time comes for the US military to withdraw, the US government’s ability to collect and act on threats will diminish. That’s simply a fact.”

Even if the Taliban were prepared to rein in al Qaeda and other groups, their ability to do so is far from certain. Last month Ken McCallum, director of the UK’s domestic intelligence agency MI5, spoke of the risk of “ungoverned spaces” emerging in Afghanistan.

An effective insurgency doesn’t necessarily translate into an effective government in a country of mountains, poor roads and many competing constituencies.

ISIS and the Taliban: Mutual loathing

While the Taliban’s connections with al Qaeda endure, both groups loathe ISIS, which has tried to establish a foothold in Afghanistan. The ISIS branch known as IS Khorasan (IS-K) has a presence in eastern provinces such as Nangahar and Kunar, but it has been diminished by Taliban attacks.

However, Abdul Syed, a researcher and author on militant movements in Afghanistan and Pakistan, says that through devastating attacks in Kabul and Jalalabad, IS-K “has transformed to a new shape for a long battle in Afghanistan.” He told CNN that it enjoys support from radical Salafists in several provinces.

Some captured IS-K fighters were being held at a prison outside Kabul, which the Taliban overran as their offensive on Kabul accelerated. There are unconfirmed reports — denied by the Taliban –that their fighters killed at least one senior IS-K detainee, Abu Umar Khurasani.

According to one regional counter-terrorism source, upwards of 100 and perhaps many more ISIS prisoners escaped two jails near Kabul that in the chaotic days leading up to the fall of Kabul and have avoided re-arrest.

US National Security Adviser Jake Sullivan said Sunday that the threat of ISIS in Afghanistan is “acute” and “persistent.” It was the risk of suicide attacks by IS-K that led the US to establish alternative routes to Kabul airport and stick to the August 31 deadline to end the evacuation.

Intelligence estimates put the number of IS-K operatives in the low hundreds, but a war of attrition waged by the Taliban has failed to extinguish the threat.

ISIS has scoffed at the Taliban victory, describing it as delusional and saying in its weekly online publication al Naba that “The victory of Islam will not come via hotels in Qatar nor the embassies in Iran and China.”

IS-K leader Shahab al-Muhajir may hope to attract disenchanted jihadis from other groups if the Taliban is seen to “deal” with the West.

There are other groups that see Afghanistan as a haven and pose a more regional threat.

Parts of the Pakistani Taliban (TTP), which have carried out dozens of attacks in their home country, have deep connections with their brethren in Kabul. Abdul Syed, who has studied the Pakistani Taliban in depth, notes that the fall of Kabul resulted in around 800 TTP prisoners being freed, including the group’s deputy emir. The TTP renewed their oath of allegiance to the Taliban and exhorted their members to follow in the footsteps of their Afghan counterparts.

“The ascendance of Afghan Islamists next door will only embolden radicals at home,” Husain Haqqani, a former Pakistani ambassador to Washington, wrote in Foreign Affairs.

“Efforts [by Pakistan] to force the Taliban’s hand might result in violent blowback, with Pakistani Taliban attacking targets inside Pakistan.”

China is anxious about Uighur jihadis using eastern Afghanistan as a launching pad for attacks inside the restive Muslim province of Xinjiang.

In recent months, according to intelligence sources and former Afghan officials, Uighurs belonging to the East Turkestan Islamic Movement (ETIM) have been in evidence in the province of Badakhshan, which shares a mountainous border with China.

Pantucci says that China’s pre-eminent concern is that Afghanistan will become a base for such groups. So far, he says, the Taliban have largely provided “rhetorical assurances” about Uighurs who might try to use Afghan territory to plot against Beijing.

At the very least, the fall of Afghanistan to the Taliban has boosted morale among al Qaeda sympathizers. One message widely distributed on jihadi forums hailed August 15 as a monumental day that had shown “what was taken by force can only be recovered by force.”

Likewise, al Qaeda’s most influential affiliate — al Qaeda in the Arabian Peninsula (AQAP) — celebrated the Taliban’s victory as the beginning of the Muslim nation’s advance towards “sovereignty, breaking the shackles of dependence and slavery, getting rid of tyrants and expelling the invaders from Muslim lands.”

And the local al Qaeda affiliate — al Qaeda in the Indian Subcontinent — was similarly effusive, praying that the “Islamic Emirate” in Afghanistan would become a “shield” for Muslims everywhere.

The UN Monitoring Team’s report in June concluded that al Qaeda “stands to benefit from renewed credibility on the back of Taliban gains.”

And it said it was “impossible to assess with confidence that the Taliban will live up to its commitment to suppress any future international threat emanating from Al-Qaida in Afghanistan.”

Even if current al Qaeda leader Ayman al Zawahiri is sick — as many analysts believe — and out of touch, al Qaeda may not have to look far for his successor. The Western intelligence community sees Egyptian al Qaeda veteran Saif al-`Adl as the likely choice to succeed the ailing Zawahiri.

He currently lives next door in Iran.

Pantucci believes the Taliban “will do what is required to be politic and try to establish their state, but fundamentally they believe the victory was given to them by Allah. Why should they turn on their allies who fought with them?”