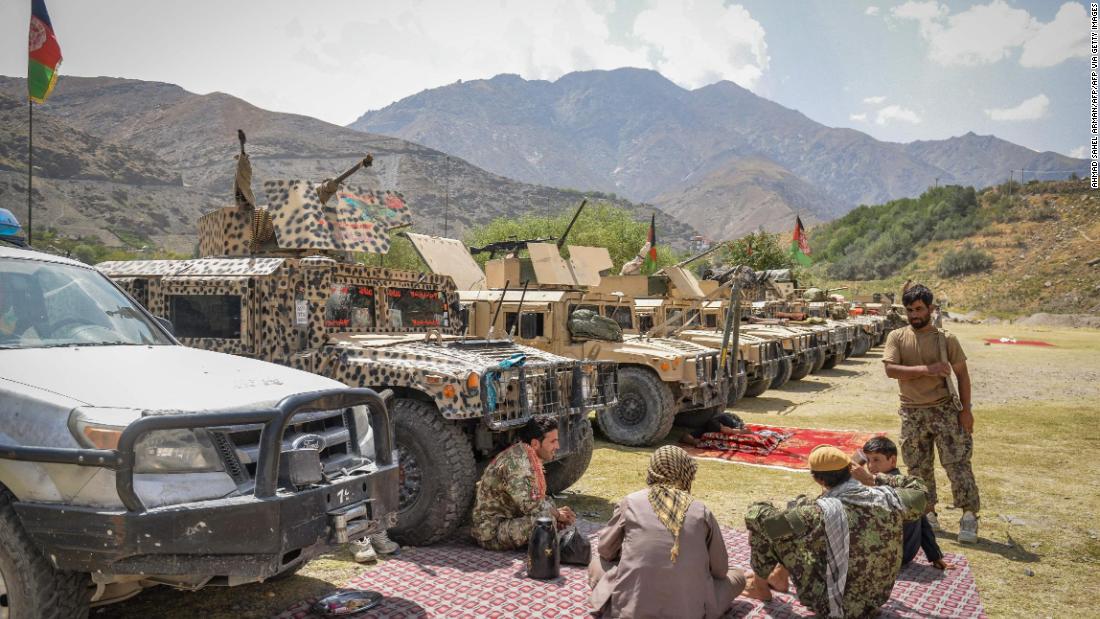 The Taliban has been massing forces in and around Panjshir province, the only one yet to fall under the militants’ control. On Monday, the Taliban said it had captured three districts in the Panjshir Valley.

Here’s what you need to know about the resistance movement in Panjshir.

The Panjshir Valley, some 150 kilometers (about 93 miles) north of Kabul, is the epicenter of Afghan guerrilla warfare.

The valley has long withstood foreign occupation; the British Empire’s army was unable to penetrate the region during its attempt to take Afghanistan in the 19th century.

In the 1980s, fighters defending the valley under the leadership of Ahmad Shah Massoud managed to hold Soviet forces at bay, even as the USSR controlled Kabul and large swaths of the rest of the country.

The landscape of the Panjshir Valley plays a part in its defensive success. Tucked into the Hindu Kush mountain range and accessible only through a narrow gorge, local forces have long harnessed its remote location as an advantage over would-be invaders.

Prior to the Taliban takeover of Afghanistan, leaders of Panjshir province had called on the Afghan government in Kabul to grant them more autonomy.

Most of the valley’s population are ethnic Tajiks, while the Taliban are largely Pashtuns.

Who are the Northern Alliance?

After the Soviets withdrew from Afghanistan in 1989, various factions of mujahedeen — or Islamic holy warriors — split into groups, fighting for control of the country.

From this chaos, Massoud formed the Northern Alliance, a coalition of Uzbek and Tajik forces. For a while his forces occupied Kabul, but were accused of human rights abuses.

Most of the country fell to Taliban in 1996. But the Northern Alliance, under Massoud’s leadership, managed to keep the Panjshir Valley free of the militant group’s grip throughout its five-year rule.

Known as the “Lion of Panjshir,” Massoud led an anti-Taliban offensive until he was assassinated by al Qaeda operatives two days before the September 11, 2001 attacks. CNN’s national security analyst Peter Bergen called the incident the “curtain raiser for the attacks on New York City and Washington DC that followed.”

The coalition is now led by Massoud’s son, Ahmad Massoud, who has vowed to continue the fight against the Taliban in the wake of their near takeover of Afghanistan.

In a Washington Post editorial last week Massoud, 32, appealed to Western forces for help in that fight, saying that members of the Afghan military — including some from the elite Special Forces units — had rallied to the cause.

“We have stores of ammunition and arms that we have patiently collected since my father’s time, because we knew this day might come,” he wrote. “If Taliban warlords launch an assault, they will of course face staunch resistance from us,” he said.

Former Afghan Vice President Amrullah Saleh — who was born in Panjshir and trained there before eventually leading Afghanistan’s intelligence agency — fled to Panjshir after Kabul fell to the Taliban.

But the playing field has rapidly changed, with the mountainous area north of the capital now infiltrated by Taliban forces, who have blocked crucial supply lines to the region.

On Saturday, the French writer Bernard-Henri Levy, who has long been a supporter of the Northern Alliance, tweeted: “I just spoke to Ahmad #Massoud on the phone. He told me: ‘I am the son of Ahmad Shah Massoud; surrender is not part of my vocabulary.'”

Will Panjshir fall to the Taliban?

On Monday, the Taliban claimed to have captured three areas of the Panjshir Valley from the Northern Alliance, with Taliban spokesman Zabihullah Mujahid tweeting that “the districts of Banu, Bel Hisar, and De Salah were completely cleansed from evil.”

Over the weekend, the Taliban moved reinforcements in to the region, calling on the Northern Alliance and its leader to surrender.

“The Mujahideen of Badakhshan, Takhar and Baghlan states are now stationed at the gate of the Panjshir,” Zabihullah said.

He denied Saleh’s claim that the strategic Salang Pass had been blocked, saying it was open and that “the enemy is under siege in the state.”

Another Taliban spokesman, Suhail Shaheen, said: “Conquering Panjshir by force will be the last option as that’s against our policies. We will try our best not to go that way.”

In an interview with Reuters on Sunday, Massoud said he was open to negotiations so long as the Taliban promised an inclusive government.

He said he was ready to fight a “totalitarian regime.”

Elders from Panjshir have been in Kabul in recent days exploring possible compromises. But so far their efforts have not been successful.