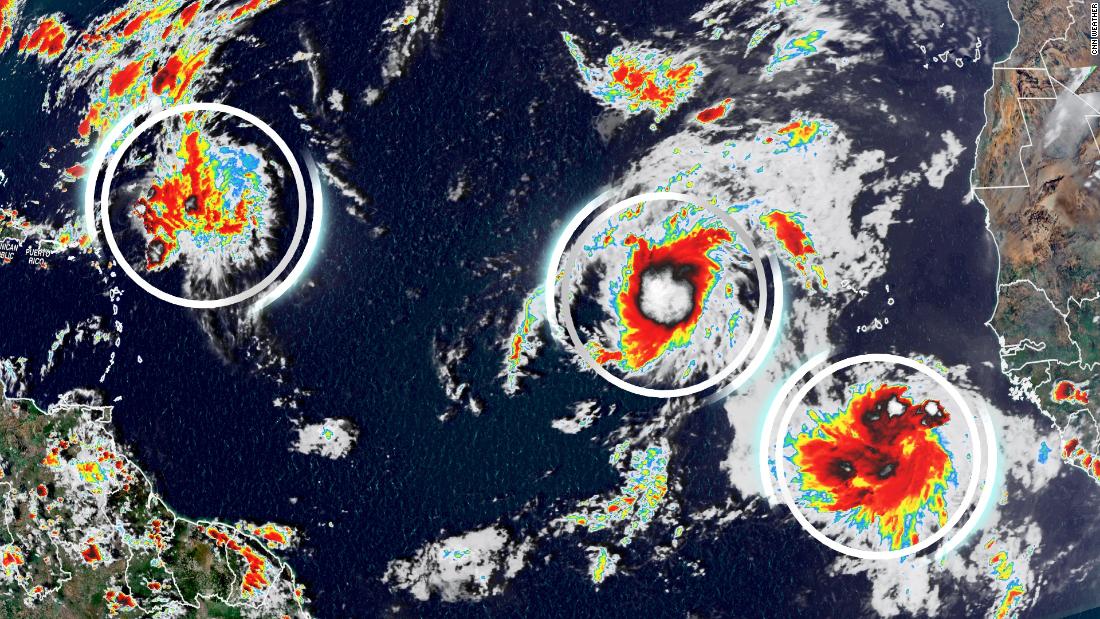 Nicholas has dissipated, but lingering moisture is still pumping into the Southeast, bringing pesky showers that won’t seem to go away.

“Over 15 million people are under flood alerts across the Southeast, where more heavy rain is expected to fall on already saturated ground,” said CNN meteorologist Dave Hennen.

My backyard in Atlanta currently looks more like the Florida Everglades, and my boys have started climbing the walls. But I do see a light at the end of this rainy tunnel — just a few more days!

The area in the tropics most worth watching is the one farthest away. A tropical wave only a few hundred miles southeast of the Cape Verde Islands is weak now, but could develop into a tropical depression later this week.

The storm will move into a more favorable environment during the next few days which should give the storm some life as it continues its journey west across the Atlantic at 10-15 mph.

There’s a 70% chance of this developing into a storm during the next five days. As it inches closer to home, this storm will be one to watch as we get into the latter part of the week.

It’s still too early to tell if this will have an impact to the US.

“This new invest will work its way westward toward a favorable place for strengthening and will likely become a tropical storm or even a hurricane,” said CNN meteorologist Chad Myers. ” At least for now, the storm is likely to turn hard right in the western Atlantic and not approach the US. If the timing of this right turn proves to be delayed, then we will have to watch future model runs for forecast updates.”

There are two more named systems in the Atlantic, and while you might think these two storms were named after a legendary baseball player, think again. Peter and Rose are two separate tropical storms.

The two names will most likely not retire this year and won’t go down into the hall of fame for tropical systems. They both look like they will be “fish” storms — meaning they will stay out to sea.

Peter has winds of 50 mph and is moving to the north-northwest.

“There are a lot of thorns in the way of Rose blossoming into a stronger storm,” said the National Hurricane Center (NHC) in a rare light-hearted discussion about the storm.

This storm could bring some showers to Puerto Rico and the Virgin Islands as it makes a close brush, otherwise the storm doesn’t pose a risk to coastal areas.

Rose has winds of 40 mph and will continue in a generally NW motion during the next several days, staying out to sea.

“At longer range, stronger shear and dry air should pull the petals off Rose one-by-one, causing the cyclone to slowly weaken,” said the NHC.

Hurricane season is far from over

With roughly two and a half months left in the hurricane season, we are just passed the midway point and just passed the peak of the season. There’s still a long way to go.

“The tropical waters are still very warm and, as they say, never turn your back on the ocean. There are still more storms to come,” said Myers.

While we have had a series of cold fronts during the last week or two, that doesn’t mean the season is over.

“Cold fronts and large dips in the jet stream do tend to turn Atlantic storms northward, but we will still have to monitor the Caribbean and Gulf of Mexico regardless,” said Myers.

So far this season, Tropical Storm Rose is the 17th named storm for the 2021 hurricane season.

This is only the third time we have reached at least 17 named storms by this point in the season, according to Dr. Philip Klotzbach, a meteorologist at Colorado State University.

There are only four names left on the list for the Atlantic basin: Sam, Teresa, Victor and Wanda.

If we use the last four names, we will go to the subsequent list that was developed to go in place of the Greek alphabet that was used in the past.

La Niña is expected to develop in the coming weeks, which could make the last several weeks of hurricane season interesting.

We usually see an uptick in Atlantic storms during La Niña, so if that weather pattern takes hold with enough time left in the season, we could see an increase in activity.

“I do expect the rest of the season to be quite busy,” said Klotzbach. “We saw this scenario on steroids last year. Let’s hope we don’t have another October-November like we had last year, but I think the large-scale should favor another active end to the season.”

This satellite image shows the KNP complex fire in California burning ever more closely to the largest single stem tree in the world, the General Sherman.

There are currently more than 100 wildfires burning across the west, including the KNP fire, which has now scorched over 23,000 acres.

This fire is on the fringes of Sequoia National Park, threatening some of the world’s largest trees.

While this part of California is not under a red flag warning on Monday, a big chunk of the state is.

Northeast to east winds of 10 to 25 mph with gusts of 30 to 40 mph are expected in this region. This will only make fire conditions worse as the winds fan the flames and help spread the fires rapidly.

Fall temps are spot on

The fall equinox arrives on Wednesday and it seems as if Mother Nature is playing along, too.

A strong cold front will progress across the country, bringing a chance of strong storms, then followed by fall-like temps for a large chunk of the country.

There is a slight risk of severe weather on Monday for places like Des Moines and Cedar Rapids in Iowa and Madison, Wisconsin. Strong winds and damaging hail will be the main threats.

However, we can’t rule out the possibility of an isolated tornado.

Behind the front, temps will fall. Chicago will get up to 81 on Monday, then top out at 70 on Tuesday.

By Wednesday, Chicago’s high will struggle to make it to the 60s, with gusty winds. Winds could be gusting 35 to 40 mph at times making temperatures feel even cooler.

Even Atlanta will feel a nice dip, for southern standards. Tuesday’s high will be around 80, then by Thursday the sun returns and highs will be in the low 70s.

The dip in humidity will be a refreshing change. Washington DC will also see a ten-degree drop between Tuesday and Thursday.

While the changes in temperatures won’t be too drastic, the feel in the air will be hinting that fall really is finally here.

The fall equinox occurs when the sun is directly over the equator, which results in day and night to be equal in length.

It also marks the first day of astronomical fall.

These neighborhoods swelter due to a racist 20th-century policy

Residents in the low-income communities across south and southwest Atlanta are struggling to cope with the hottest summer across the US since the Dust Bowl of the 1930s.

Heat waves are the most lethal weather-related disaster in America.

And these health risks are not distributed equally. During extreme heat events, a few city blocks can mean the difference between a manageable 80-degree afternoon or a sweltering, 100-degree sweat fest.

The staggering temperature difference is due in large part to historical redlining, a federal government-sanctioned effort that began in the 1930s that amplified segregation by denying loans and insurance to potential home buyers in poorer neighborhoods and neighborhoods of color.

While the racist practice was banned in the late 1960s, its effect is still apparent.

If you are lucky enough to have cloud-free skies, you’ll be in for a treat. The harvest moon will be on display two nights before fall begins, and you might want to catch a glimpse.