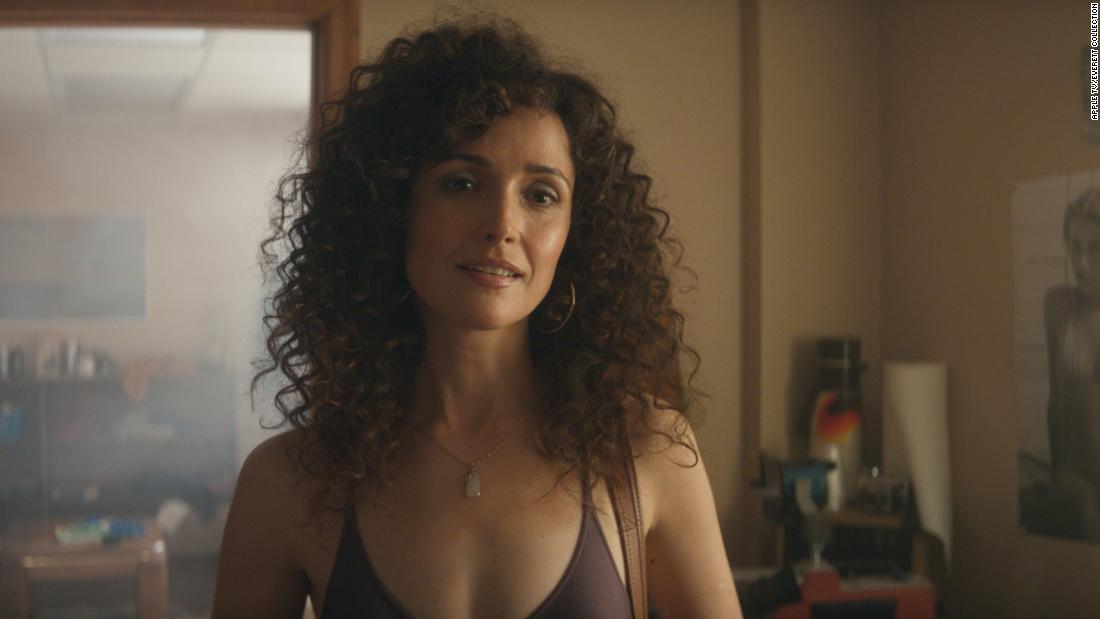 In the episode, which began streaming Friday, Byrne’s Sheila sees her aerobics business open up potential new doors, her husband’s election end with a fizzle and, after a blow-up involving a cream puff, her mutual attraction to developer John Breem (Paul Sparks) move into a strange new stage.

In an interview with CNN, executive producer Annie Weisman and director Stephanie Laing, who helmed seven of the show’s 10 freshman season episodes, break down the action and tease what’s to come in Season 2.

This conversation has been condensed and lightly edited for clarity. It contains discussions of eating disorders that some may find triggering.

CNN: I want to start off by thanking you both for a season of TV that I cannot stop thinking about. It was so jarring and uncomfortable and a great, specific story. I was angry at Sheila the whole time, but I was also angry for her. What did you want this finale to be in terms of her journey?

Annie Weisman, executive producer: It was a long time coming that she was going to walk out the door of that house. I always knew that we wanted to be true to the difficulty of that at the time — you know the dangerousness of that. She has spent so much of her life controlling threatening emotions — reigning them in, pressing them down. We knew that there was going to be some release when it happened. And the writers came up with this idea for this unique kind of sexual connection that happens between her and John Breem (Paul Sparks), which ended up being the most Covid-friendly sex scene ever shot in some ways. Totally inadvertently.

CNN: I was going to work my way up to talking about the scene where they engage in self-pleasure in front of each other, but let’s dive in. Stephanie, tell me about directing this finale.

Stephanie Laing, director: It starts on the page, right? Everyone just pays off so well. It’s all building up to this moment. And I agree with you, you’re sort of hating Sheila and then you’re loving Sheila and you want her to win. So when she finally does something, I think everyone is sort of cheering alongside her.

For me, the finale is the release. It’s been building, building, building. When you leave her in episode nine, she’s like, ‘This is how we win,’ she’s gained the confidence and, for lack of a better way of putting it, the lady balls to go marching off into this future that we will find out more about.

Weisman: Also, the last little tether binding her to Danny’s dreams is that election, and when that gets snapped, finally… that frees her to walk out that door and have this other kind of release. And she’s been spending so much time taking out her emotions on herself and inflicting mean words and behaviors on her body. It was kind of rewarding to see her do this thing. It was kind of embarrassing and unconventional, but it was a moment of pleasure and connection in her body and enjoying being looked at.

And in terms of like doing the actors, it was important to talk it through and make sure they knew that what we were suggesting was really about where their eyes were, and it was really about the connection and that the sexual part was really just more suggested than explicit. The performances are really brave and really great.

Laing: I think that speaks to everything about ‘Physical.’ Shooting it, behind the scenes and what you see on the screen is that everyone really created a safe space for all of it.

CNN: I wanted to ask you about those two characters because I don’t get a lot of physical chemistry between them. They just seem like two repressed people who recognize themselves in each other. Can you talk about their dynamic a little bit and where is that going into this second season with that?

Weisman: I totally agree with that. I think they there’s something that they recognize in each other. There’s something familiar when they look at the other person, and it’s over a big divide. They’re, like, very different. They’re both married to other people, they’re politically different, their faiths are different. It shouldn’t work. But I think they recognize trauma in each other, and they recognize a mutual like-mindedness about wanting power and wanting things because of that trauma. That’s really like operating on a probably subconscious level, but I do think that’s true that there’s a certain pain that you can just kind of pick up [in] somebody else’s eyes, and that’s what they see in each other. So there is a connection. I don’t think it’s a very, anyone would call it a very healthy connection, but it is a connection. They’re on a kind of collision course of each other, and that’s going to continue through the second season.

CNN: Let’s talk about Sheila’s eating disorder. Speaking from experience, it’s a long road to wanting to get better from something like this — much less actually doing it. I don’t get the sense that she wants to let go of it yet. Where is that going to take us in Season 2?

Weisman: That’s right. I don’t think she does. And the great thing about getting to explore it further in a second season is the inner voice is the dramatization of the eating disorder. It’s almost like she’s in an abusive relationship with it, and there are times when she almost gets away and it kind of pulls her back in. I think, like you just said and this is my experience too, there’s this fear that without it you’ll be really lost. [Weisman has opened up about her own experience with an eating disorder in the past.] The lie that it tells you — which I think is similar to an abusive relationship — is, “Without me, you’re going to lose all the things that make you you — all the things that make anyone love you, all the things that make you good at anything. They’re going to be gone without me.” That’s a very difficult message to get away from. The tough thing with any kind of recovery is really getting ready to feel your feelings instead of avoiding them. So she’s further along than she was when we met her, but she still has a ways to go.

Laing: You can see it in her friendships, too, because that’s part of it as well — like her friendship with Greta (Dierdre Friel). There was a moment when she says, “I have a hard time making friends with women.” She was saying so much in that moment.

CNN: I remember thinking that scene was a huge milestone for her. I also thought the kitchen scene in this episode with Danny was a huge moment. It was so deeply uncomfortable to see him talk about her eating disorder directly for the first time but with what seemed like no actual care or concern for her. When he shoved the cream puff into her mouth, I felt so bad for Sheila.

Laing: Again, it’s just very honest. And you have Rose [Byrne] who is just so incredibly talented, and Rory [Scovel], who on the last take was fighting back tears. From his own character’s point of view, he has no concept of what Sheila goes through at all. He’s too hung up on himself. But even if he wasn’t hung up on himself, he’s just not recognizing it at all. He’s in denial.

Weisman: And to his credit, she’s not letting him in. The funny thing about the way the show works is that we get access to her thoughts but nobody else does. She’s so good at hiding them. He can’t react to things she doesn’t let him in on. I think that’s even more true in this [time] period where there wasn’t as much language around and discussion on eating disorders. But it’s even true now. People get really good at concealing it and hiding it. But if you’re talking about the cream puff scene, Rory was just so nervous about doing that scene. He is as far away from this character as a person could be; he’s just a wonderful actor. He was so worried that it was going to be crossing a line that you would never be able to come back from because it’s really so aggressive. It’s a kind of an assault, which was the idea of it.

Weisman: For weeks he was hand wringing. Sweet Rory.

CNN: ‘Assault’ is a good word for it because, speaking from experience, when you have an eating disorder, what you eat, how you eat it and who sees you eat it are all such deeply personal things and triggering. When I was at my worst, what Danny did would have felt so violating.

Weisman: I’m sorry to hear that, and grateful that you bring it up because that was part of the thinking. You know, a lot of times, I think eating disorders and bulimia and binge eating can be such a punchline for so many people. Part of the goal for all of us — the creative team and Stephanie and I talked about this a lot — is to really take it seriously and really see the violence of it and the pain of it. That was a lot of the thinking behind that scene.

CNN: Lastly, launching a show at this time is so hard because there’s a lot of great stuff out there, but you were renewed for a second season, so it means some people are watching it and loving it. Who have you found to be your audience on the show and does it at all inform your approach next?

Laing: A lot of women have reached out about the show, of course, but I have, surprisingly, had a lot of men reach out to me. So much so that two days ago, someone approached me and said, “I really think we should talk about men’s eating disorders. We have this too. Why isn’t this talked about?” Because we’re being so honest and serious about it and taking it seriously, it is opening a conversation where it might have not been before.

Weisman: Same. I have to say, there’s a lot of women who’ve reached out and talked to me, but I’ve been really surprised by the men and the kind of men who’ve reached out and who’ve responded and who talk about it. It’s been really moving and interesting to hear from some dudes. I’m going to say some actual dudes — some certified dudes — who are intrigued by and interested in the show because I think it’s turning over some assumptions and ideas that they had, and that’s exciting. I feel like we just have to stay the course in terms of telling the truth and being honest and having the tone we have and letting people come to the show rather than going to them.