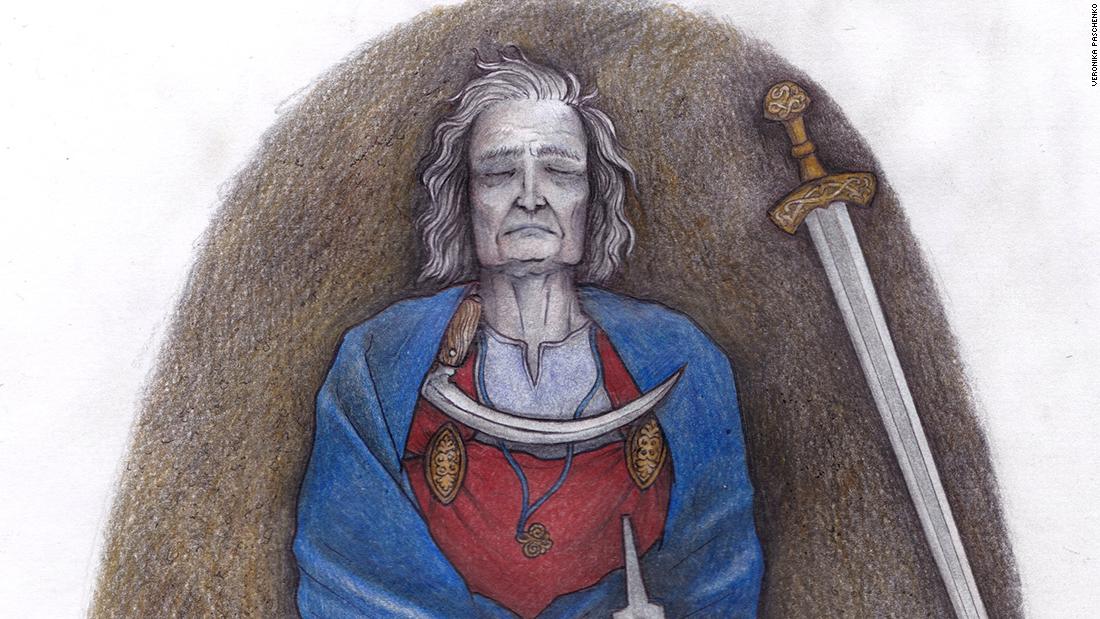 A new analysis of the grave’s contents has produced a new hypothesis: The person buried there may have been nonbinary.
The findings suggest that nonbinary identity — that is, when a person identifies as neither male nor female — may have existed in medieval Europe. The elaborate manner of burial suggests that nonbinary people may have occupied a special role in medieval society worthy of respect, researchers wrote in a new study published in the European Journal of Archaeology.

“This burial has an unusual and strong mixture of feminine and masculine symbolism, and this might indicate that the individual was not strictly associated with either gender but instead something else,” said lead author Ulla Moilanen in an email to CNN.

The initial discovery was incongruous with what researchers knew about medieval burials at the time: The person buried there was wearing jewelry and feminine dress, items typical for a woman’s burial in that era, but a sword was placed on top of their body. It puzzled scientists, who believed that the grave may have at one point belonged to two people rather than a “warrior woman.”

So, more than 50 years after the initial study was published, a team of researchers from Finland and Germany took a closer look at the grave’s contents (or what they could parse with the few materials that had not disintegrated).

The grave, they found, contained traces of rabbit hair and bird feathers, suggesting whoever was in the grave was given an “elaborate burial,” the researchers wrote in the study. And there were the brooches, items typically buried with women in that era, that first caused scientists to assume the person buried there was a woman.

But the sword placed on top of the body gave the team pause. It showed no signs of battle wear and was missing a hilt (the bottom part of a sword that comprises its grip, guard and pommel), suggesting the sword had never been used. That’s unusual for the time period — previous studies found that the area in which the body was buried was the site of many battles. The state of the sword and its positioning in the grave lends it a “less violent and genderless” symbolism, the researchers said.

The sword’s positioning was a clue, too: “Swords placed directly on a body may be interpreted as strong symbols of identity and personhood,” the researchers wrote.

An analysis of the only usable fragment of femur left in the grave found evidence of an XXY karyotype, consistent with what is known today as Klinefelter syndrome. It’s a genetic condition in which a male child is born with an extra X chromosome and can result in smaller-than-normal testicles, enlarged breasts and little body or facial hair, according to Mayo Clinic.

The researchers could only analyze the ancient DNA and the items the person was buried with, so they couldn’t confirm with certainty that this person identified as nonbinary. Being nonbinary isn’t based on biological sex but a person’s understanding of their gender identity, and chromosomes alone “cannot reveal someone’s gender identity,” said Chris Babits, a postdoctoral teaching fellow at Utah State University, where he specializes in the history of gender and sexuality.

Nonbinary people have existed for centuries

Nonbinary identity isn’t new or exclusive to Western culture. Indigenous people in North America long occupied social roles that stood outside of the gender binary, existing between male and female, Babits said. These First Nations and Native American people “were ascribed special gifts” based on their identity, he said, “all useful to the preservation and survival of their people.”
And in India, a third gender, “hijra,” has been acknowledged since at least the eighth century BCE as per evidence cited by historians, Babits said. Hijras today are people who may be transgender, intersex or nonbinary but dress and behave in ways perceived as feminine. While they face discrimination, hijras have also played important roles in their communities, usually in a creative or ceremonial capacity.
There are other examples in medieval times of people who lived outside the gender binary: Joan of Arc, for one, said Jacob Doss, a PhD candidate in medieval European history at the University of Texas at Austin. Though the French martyr is identified as a woman in most writings about her life, she dressed in traditionally male clothes (which later contributed to her being burned at the stake).

“Understanding more about the history of trans and nonbinary people might disrupt the conservative worldview that there have only been two genders throughout all of human history,” Babits told CNN. “Historians know that not to be true.”

Nonbinary and transgender people are often ostracized for seemingly rejecting the binary ideas of gender, Babits said. The discovery of a person who may have been nonbinary over 1,000 years ago and was likely highly respected by their community adds a new entry to the history of nonbinary people.