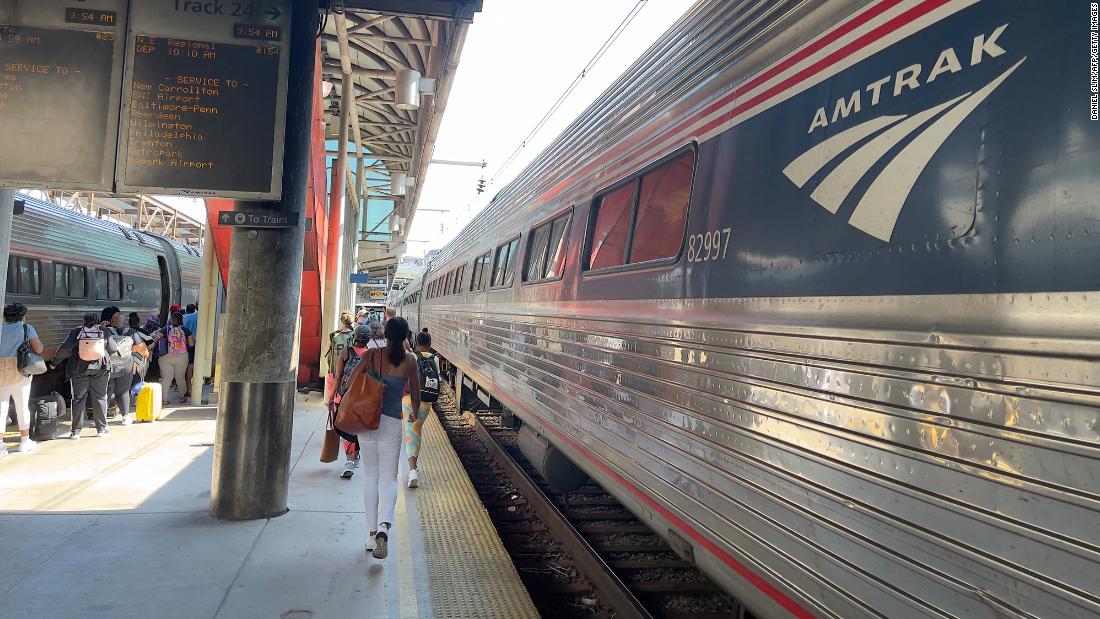 Transportation experts think the infrastructure bill could be the start of a turning point for the disadvantaged state of US rail travel. But the bill doesn’t change the fallout of Americans looking past rail for generations. Deep barriers remain to rail travel thriving in the US as in other leading nations.

Attention on passenger rail increased with the election of President Joe Biden. He has long had the nickname “Amtrak Joe” for his regular rail commutes back to Wilmington to take care of his two sons after his first wife and one of his children were killed in a car crash. He was also involved in an Obama-era push for high-speed rail.

Passenger and freight rail receive $66 billion in the infrastructure bill the Senate passed last week. But the details are still up for negotiations in the House before the bill hits Biden’s desk.

Regardless, any number close to $66 billion will be a large infusion of cash for an industry that’s watched its competitors — road and air travel — receive overwhelmingly more government aid. Rather than compete on a level playing field with other transportation modes, American passenger rail has had to fight off attempts from multiple presidents to slash its funding.

“Amtrak was set up to fail,” Robert Puentes, CEO of the Eno Center for Transportation told CNN Business. “It wasn’t designed to last as long as it has.”

Which means that money has to be spent now just to bring it back to its baseline.

Most new funding will be for maintenance, rather than the futuristic high-speed trains that riders in Europe and Asia have enjoyed for decades. The White House has said there are 5,000 rail cars and thousands of miles of track, signal and power systems in need of replacement. Amtrak has said it needs $38 billion to reach a state of good repair in the Northeast corridor.

“This is an improve the status quo bill,” said Jim Mathews, CEO of the Rail Passengers Association. “Passengers won’t have to bring Velcro and duct tape to repair their own train cars.”

A world-class railroad remains out of reach

Rail advocates, including Biden, have long touted the vast potential they see in passenger rail.

“You and your family could travel coast to coast without a single tank of gas onboard a high-speed train,” Biden said earlier this year. He’s also spoken of the potential of trains going 220 mph between Atlanta and Charlotte, or making trips between DC and New York in 92 minutes if three curves along the route are straightened.

Train travel can make getting around the US safer, greener and more efficient, advocates say. Rail travel has less environmental impact than other ways of getting around. Rail also has a better safety record than motor vehicle travel.

But the full potential for world-class rail will still be unmet even with the additional spending. California’s ongoing high-speed rail project has been estimated to cost $100 billion, a single project far exceeding the infrastructure package’s entire new investment in rail.

The White House calls the new funding the largest federal investment in passenger rail since the creation of Amtrak in 1970. But when considering inflation and population growth, it lags a spurt of rail investment in the late 1970s and early 1980s, according to Yonah Freemark, a researcher at the Urban Institute.

The $66 billion, which is mostly for Amtrak, will likely lead to more frequent service and more stops nationwide as well as new equipment. Choke points on the Northeast corridor, in Baltimore and New York, may be relieved, paving the way for faster trips.

Amtrak praised the investment in a statement, but also called on Congress to make sure it gets on-time performance and preference from the host rail lines that its trains run on. Amtrak risks delays and inconveniences because the freight railways can give top priority to their own trains, while Amtrak trains wait their turn.

Passenger rail improvements could be thwarted by freight railroads that own much of the tracks that Amtrak operates on, according to Mathews and other rail experts. They point to the $2 billion invested to upgrade Amtrak service between Chicago and St. Louis. Technology was installed so trains could run at 110 mph, which would cut about an hour off the trip. But safety technology that track owner Union Pacific installed isn’t suited for trains going over 90 mph.

There’s also a risk that Amtrak’s improvements will be short-lived, as the new funds run out in five years.

Joseph C. Szabo, who led the Federal Railroad Administration until 2015, cautioned that rail has long seen investments in fits and starts, and will continue to be disadvantaged until it has predictable, dedicated funding, like roads and aviation.

“It’s always been treated somewhat as a stepchild,” Szabo said.

The rail industry was dominant in the 19th century, and created America’s first big businesses. But rail fell out of favor in the 20th century in America, and was seen as antiquated. Henry Ford, inventor of the Model T, once predicted that some up-and-coming nations like China would entirely skip rail and build highways and cars instead. (Ford’s prediction didn’t materialize, and China now has the largest high-speed rail network in the world.)

Private rail companies struggled to turn a profit on passenger rail service in the mid-20th century. They were hindered by federal government regulations that set prices, and could force railroads to continue to operate unprofitable routes. The US government heavily subsidized rail’s competitor, highways, with the largest public works project in history, the Interstate Highway System. Rail travel couldn’t compete. After the large railroad company Penn Central went bankrupt in 1970, the US government created Amtrak to preserve passenger rail service. Passenger rail wasn’t profitable, so private companies wanted no part in it.

Even a president with the nickname “Amtrak Joe” is proving not to be enough to overhaul the status quo.