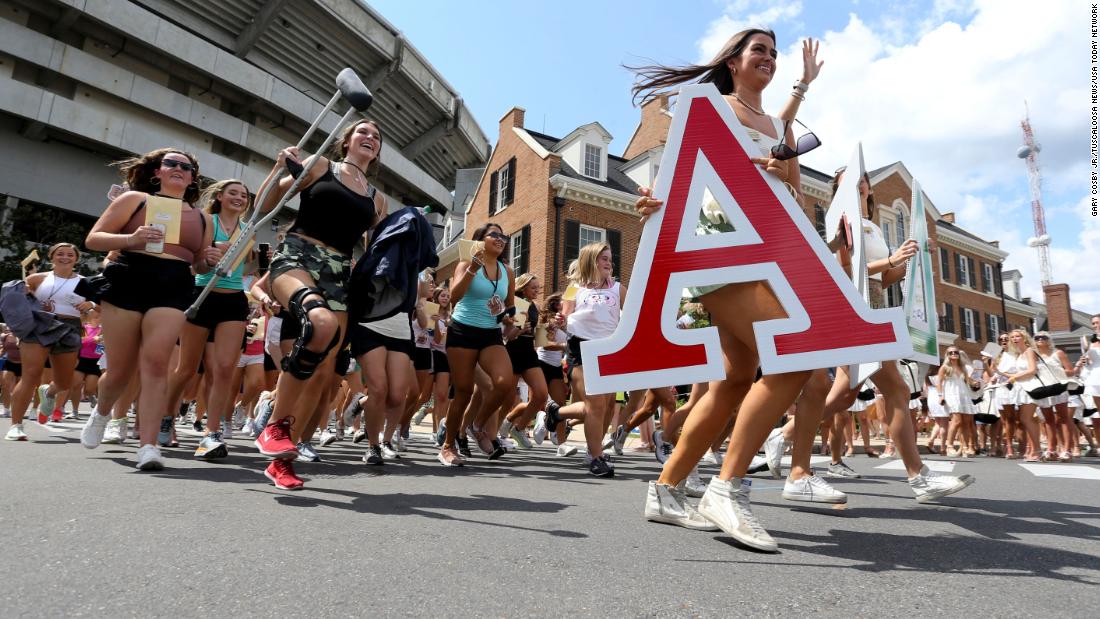 If those sentences made a lick of sense to you, then you’re fluent in the language of “RushTok,” a corner of TikTok that stars young, bright-eyed women eagerly sharing their outfits and anecdotes about what it’s like to run the gauntlet of sorority recruitment.
The “rush” process at a sizable Southern university appears to be, according to our TikTok guides, part audition, part job interview with a hearty helping of pageantry. You dress up to wow the women of a Greek organization and show off your small-talk abilities. The young collegiates from the University of Alabama and Auburn University, among others, spent hours every day primping for the chance of being invited to join one of those gargantuan houses on Sorority Row.
Most of us have never caught a glimpse of these processes — until RushTok, that is. As clips began to flood TikTok, we wondered to ourselves if we, too, should buy some Kendra Scott earrings. We giggled as the young women we followed endearingly mispronounced “philanthropy” and recoiled in shock when our RushTok avatar, Makayla, wasn’t offered a bid to any houses.

Sorority rush at a big Southern school is a different world than many of us have ever known, as scholars of digital and social media point out. And our fascination with the unknown helped RushTok rocket to the top of TikTok’s For You Page.

“Bama #RushTok took off because it existed at the perfect intersection of many things — an experience outside of one’s own, the features of TikTok and what people expect out of the app, and content that is highly meme-able,” to name a few factors, said Jessica Maddox, an assistant professor of digital media at the University of Alabama, the very school where many “RushTok” videos take place.

Recruitment at the schools leading the trend just ended, so our interest in RushTok will likely fade faster than a spray tan melting off in the Alabama heat. Most TikTok users likely didn’t expect to tumble down the rabbit hole of Southern sorority recruitment this summer and come out an expert, but the social media app has a way of introducing very specific experiences to the zeitgeist. Here’s why RushTok held our attention captive this month — and why so many of us now know what the Pants Store is.

The novelty of sorority rush fascinated us

The fascination with RushTok “is rooted in an even split between learning about Greek [sorority and fraternity] culture and learning about Southern culture,” Maddox told CNN. Trivial as sorority recruitment seems to the casual viewer, it’s everything to the young women in the thick of it — how they fit in at their new university depends on it, at least in the moment. That obsession with joining a sorority isn’t something all viewers can relate to, but it’s a facet of Southern culture that begs to be explored.

It also doesn’t matter if we’ve never experienced firsthand the heartbreak of being dropped by a favorite Greek house. The novelty of RushTok is part of its appeal — that’s because social media is “inherently voyeuristic,” said Diana Zulli, an assistant professor of communication at Purdue University who studies digital tech and its influence on politics and society.

“People are getting access to information and a culture that is foreign to them, which is likely propelling this trend,” Zulli said.

The University of Alabama in particular has a culture unlike that of most universities: For one, about 10,000 undergraduates belong to a sorority or fraternity — that’s around 35% of the university’s undergraduate population. There are a whopping 66 Greek-life organizations, and a few of them have previously gone viral for their grand mansions that rival the White House.

In other words, Greek life is an extremely big deal at the University of Alabama in a way that it isn’t at many other universities. And viewers who’ve never experienced anything like it were rapt.

It made for good memes

Many of the women who starred in these videos spoke with thick Southern drawls and mentioned local brands with a hilarious matter-of-factness — that’s the “highly meme-able” element Maddox mentioned. A trend like RushTok can be remixed, parodied or inspire spun-off content that maintains its audience’s focus on the same topic, she said.

“Much of the discourse on TikTok wasn’t necessarily Bama #rushtok, but there was an influx of videos talking about Bama #rushtok or making video memes of outfits of the day with exaggerated Southern accents,” Maddox said.

The TikTok algorithm is still mostly a mystery, but Maddox said that based on her research, she’s found the algorithm to be “finely tuned to push … highly related content, and that’s what often expands people’s experiences on the app.”

Some of that related content drew attention to the history of segregation within sororities at the University of Alabama and the stark disparities in the number of Black women and women of color who join those Greek organizations. Other users just wanted to do a timid dance to a rap celebrating the women of Zeta Tau Alpha. Whether other users were making fun of the women of RushTok or engaging on the topic with the same sincerity is “inconsequential,” Zulli said — engagement is engagement. TikTok users were hashtagging “RushTok” no matter the tone their own clips took.

TikTok has been a saving grace for many during the pandemic, a portal into new, highly specific worlds. And sorority rush came right on cue — it began just as the Olympics, during which athletes documented their adventures in the Olympic Village, were ending, Maddox said.

The sorority rush process, like the Olympics, was something viewers could watch day-by-day. It followed a narrative arc — after Day 2 of the sisterhood round, we waited with bated breath to see where our RushTok favorites would head next. Every new video was a chapter in their story, and they usually ended on a cliffhanger.

“This gives people something to follow, something to anticipate, and an end date,” Zulli said. “Rush will not last forever, so following along is not too much of a time investment.”

And because RushTok was unfolding live, there was a narrow window to get in on the cultural conversation. It was better to get in early than come in too late, Zulli said.

“So, even if people are not personally invested in Greek culture, they are probably invested in being able to talk about it, on or off TikTok,” she said.

TikTok trends are ephemeral, vacating the mind as soon as newer, funnier content arrives. Now that the young women of RushTok have “run home” to their new sisters, the hashtag will soon be replaced and fall off users’ “For You Page,” Maddox said.

And the app, needing to retain users, will likely suggest new videos and hashtags to its users so sorority recruitment doesn’t dominate the app into the fall, she said. It’s possible RushTok could return next school year, given its popularity, she said, but for now, RushTok will cede space to whatever oddly specific, highly hilarious trend comes next.