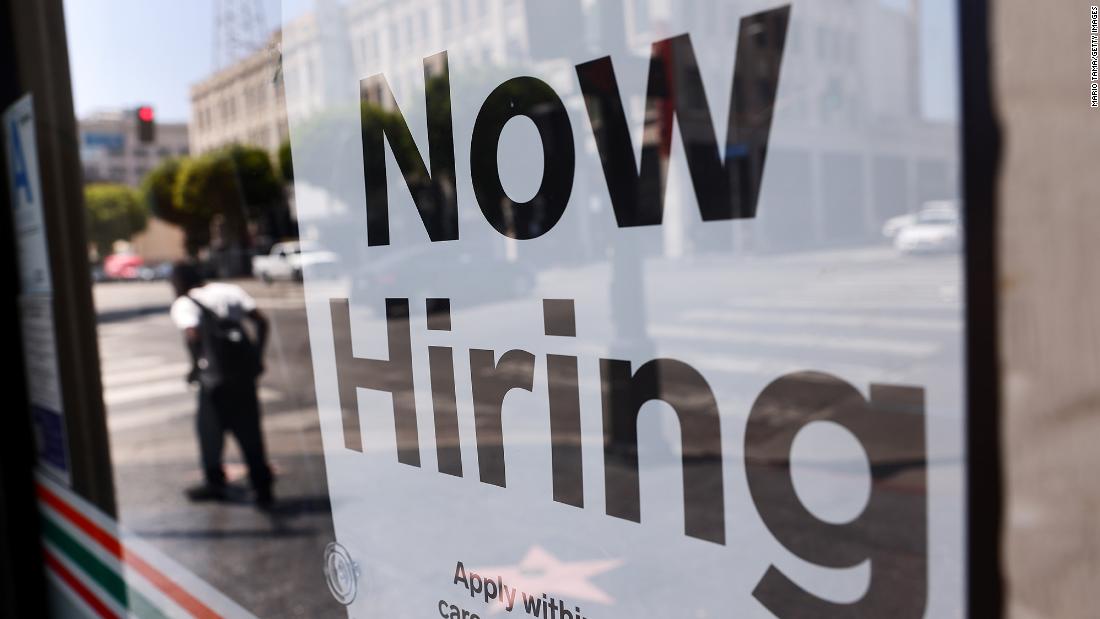 It was a strong summer, with nearly 2.5 million jobs added back between May and July even as the Delta variant started to increase Covid-19 infections — but economists are now growing cautious that August may not have been as strong.
Economists polled by Refinitiv still predict 728,000 jobs were added last month. But that forecast was revised down from 750,000 early Wednesday after a disappointing reading from ADP Employment Reports, which looks at private sector payrolls.
It was the second time in a row that the ADP report was significantly below expectations: 374,000 jobs were added in August, compared with 613,000 predicted, according to Refinitiv.

The two measures of the labor market aren’t correlated — but the ADP report, which comes out first, is seen as a barometer for the jobs data later in the week.

“Our latest report suggests that the labor market recovery has downshifted,” Nela Richardson, chief economist at ADP, told CNN Business on a call with reporters. Increased spread of the virus might again keep people from returning to work. “The final estimate of job gains for August will likely fall short.”

That doesn’t bode well for Friday.

But things have been a bit confusing. Last month’s downbeat ADP report was followed by a strong government jobs report, for example. The forecasts also vary widely. Moody’s Analytics predicts 500,000 jobs were added in August, while UBS expects 1 million, according to Refintiv. It serves as a reminder that making predictions during the evolving and recovering pandemic economy is still very hard.

“The uncertainty of the Delta variant has exacerbated the unevenness of the recovery,” she said.

And all this is happening just as the unprecedented stimulus that helped the economy during the worst of the pandemic is coming to an end.

Three US government programs designed to help the jobless during the past year and a half are ending this month. About two dozen states have already ended at least one of the federal unemployment benefits programs, opting to close them early this summer.
Last week, 340,000 Americans filed for initial jobless benefits, adjusted for seasonal swings, a new pandemic-era low. Claims under the Pandemic Unemployment Assistance program, which provides benefits to workers such as the self-employed, slipped to 102,405, according to the Labor Department. PUA benefits will run out in a matter of days. Without the seasonal adjustments, a total of 390,156 claims were filed under both programs last week, still well above pre-pandemic levels.
Both investors and the Federal Reserve will be watching Friday’s jobs report closely. The Fed slashed interest rates to zero and committed to a huge monthly asset buying plan at the start of the pandemic. But at last week’s Jackson Hole Symposium, Fed Chairman Jerome Powell hinted that it might be time to roll back those monthly purchases soon, confirming what investors long expected. Many believe the Fed wants to see another strong jobs report before officially announcing the rollback, or taper, of its purchasing program.

That means a lot is riding on Friday’s report. If the number is high, it lends more credence to the theory that the Fed will announce tapering sooner rather than later. Stocks could fall in response because ending monthly asset buys is the first step on a long path to higher interest rates.

But if the jobs report misses expectations, the taper announcement could be delayed. That would give the stock market even more room to run.