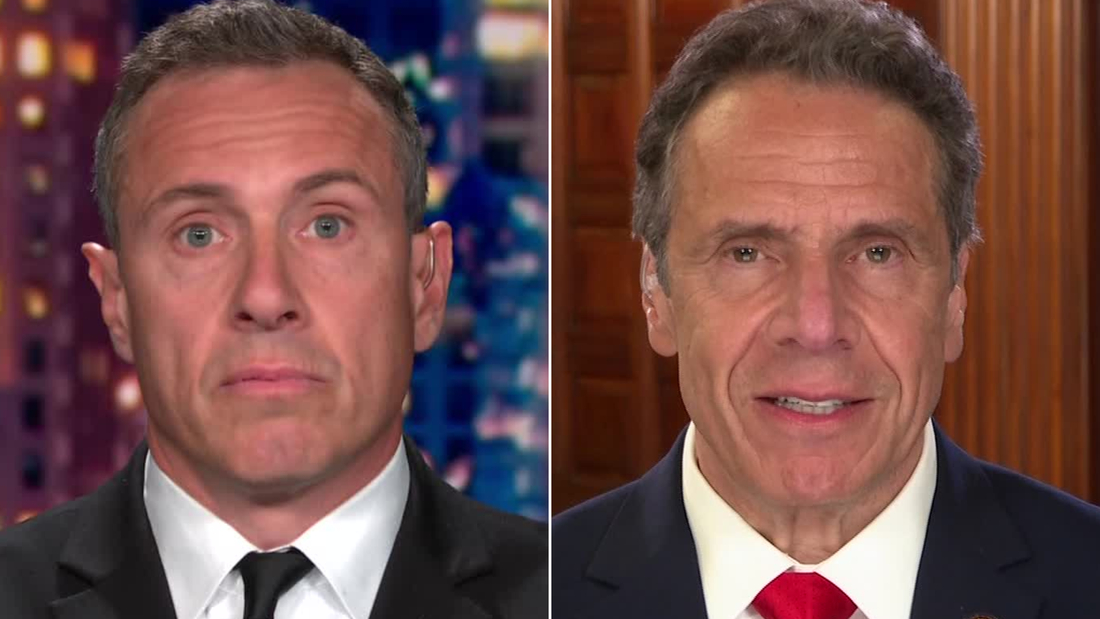 There’s no relationship quite like it in politics or media: A pair of brothers, one governing the fourth biggest state in the country, the other hosting one of the most prominent shows on cable TV. Right now, both men are standing in a very bright spotlight.

Governor Andrew Cuomo’s alleged sexual harassment and abuse of power — documented in excruciating detail by NY AG Letitia James’ report — is leading him down an impeachment track. Chris Cuomo’s role as a member of his brother’s inner circle, a role that raises serious questions about journalistic responsibilities and ethics, is also detailed in the report. Chris surely has a lot to say about his brother. But for the time being he is staying silent: He did not mention the scandal on “Cuomo Prime Time” Tuesday night.
Everyone else is talking about it, though. The political firestorm around Governor Cuomo was the lead on all of the nightly newscasts. And CNN’s coverage of the governor was scathing all afternoon and evening. In the 8pm hour, for example, “Anderson Cooper 360” led with the news out of New York while MSNBC and Fox went with other stories. “It’s not clear” if he “can do the basic function of government and governing in this state,” Maggie Haberman said.
Per Haberman’s NYT colleague Katie Glueck, “Events could move swiftly: A person familiar with the process said it could take just a month to complete the inquiry and draw up the articles of impeachment. A trial in the State Senate could begin as soon as late September or early October.” Details here…

Can Chris Cuomo continue to helm his 9pm show while being connected to one of the biggest stories in politics? CNN management said yes on Tuesday by keeping him on the air. Chris started to call his show a “Covid command center” last week and he kept up the theme on Tuesday, leading with the Covid case surge among the unvaccinated and interviewing Jerome Adams about it.
Inside CNN, some staffers I spoke with were supportive of Cuomo on Tuesday, recognizing that no one chooses their family members, and that viewers expected to see him on the air for “Prime Time,” one of the network’s highest-rated shows. Some other staffers were, as BuzzFeed News wrote, “highly critical of the company’s decision not to discipline Chris Cuomo for his role in the scandal.”

That’s because of Chris Cuomo’s role advising his brother, and even collaborating with members of his brother’s senior staff, as the sexual harassment charges crested earlier this year. The Washington Post reported on this in May, and CNN publicly chastised Chris for participating in calls with the governor’s staffers. Chris also publicly apologized to his colleagues at the time for putting them in a “bad spot.”

A CNN spokeswoman declined further comment on the matter on Tuesday. Chris was mentioned a few times in the AG’s report. As the NYT’s Michael Grynbaum wrote, “One document included in the report shows Chris Cuomo participating in an email chain on Feb. 28 in which the group drafted a formal public statement for Governor Cuomo; the statement was issued by the governor’s office later that day. Chris Cuomo appeared to weigh in on the wording of the statement, although it was unclear if he wrote it.”

People listening to the CNN host’s lunchtime radio show on SiriusXM have heard his feelings about his brother in recent weeks. He has been steeling himself for the AG report, expecting that it would hit in early August. On the air, he has sounded protective of his brother at times; bitter about the political warfare at other times; and detached from it at other other times. Overall, I’d say, he sounded realistic about life as a member of his famous political family.

>> When Chris apologized in May, he said on his show, “Being a journalist and a brother to a politician is… a unique challenge, and I have a unique responsibility to balance those roles.”

How it’s being covered

— Immediately after Chris Cuomo handed off to Don Lemon for “CNN Tonight,” Lemon said “the calls are getting louder and louder,” meaning the calls for “Gov. Cuomo to resign…”
— The banner headline on NYTimes.com at this hour: “Biden Calls for Cuomo to Resign After Sexual Harassment Report.”
— One of Governor Cuomo’s accusers, Charlotte Bennett, gave an exclusive interview to Norah O’Donnell for the “CBS Evening News.” Bennett said “if he’s not willing to step down, then we have a responsibility to act and impeach him…”
— Lester Holt had an exclusive with Albany County District Attorney David Soares, who said “we will conduct our own independent investigation…”
— Philip Bump said “the most abominable allegation against Andrew Cuomo centers on a New York state trooper.” Note the parts about the Albany Times-Union…
— The 19th: “Andrew Cuomo’s response to the harassment report is nothing new for men in power…”

A front-page editorial is running across all 12 of Gannett’s local publications in New York on Wednesday, calling on Cuomo to resign, just like countless elected officials have. The editorial says “we repeat the call we made in early March — that for good governance and for the dignity of women everywhere, Cuomo must vacate his office. Now, we say that he must leave at once.”