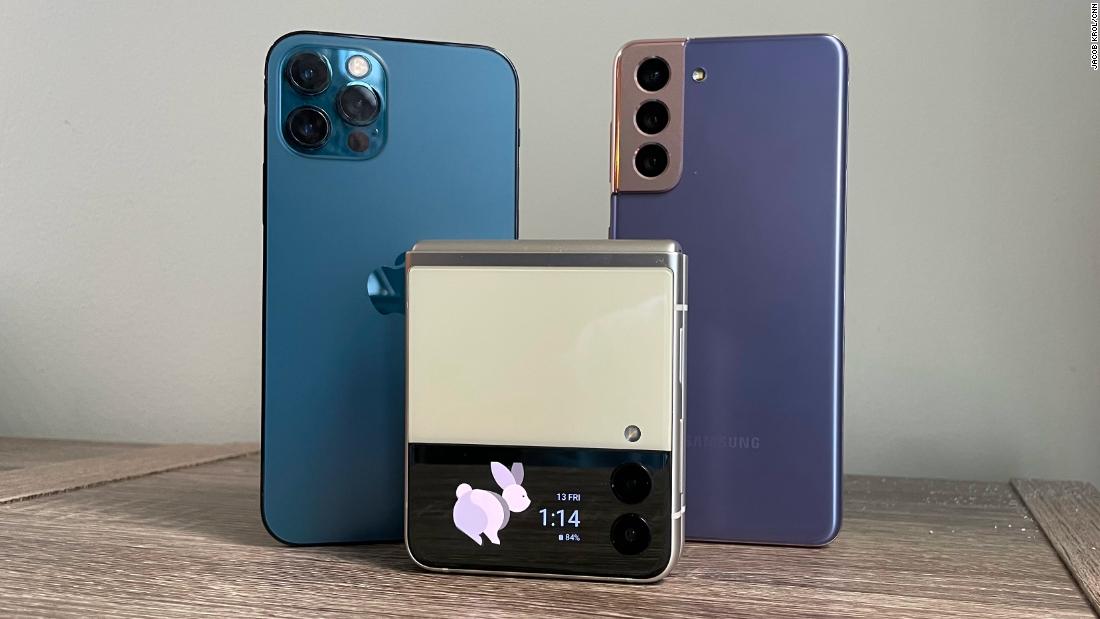 Samsung’s been beating the foldable drum for three years now. And while it took them a generation and a half to get the beat timed right, they now offer two variants of what a foldable phone can truly be. The expensive and flagship Galaxy Z Fold turns a standard smartphone into a tablet-like device. Then there’s the hipper and more affordable Galaxy Z Flip.

Neither of these — or any foldables — have yet crossed into the area of affordability compared to other top smartphones, though. The original Galaxy Z Flip was $1,380 and the Z Fold is closer to the $2,000 price range. But that’s changing with the Galaxy Z Flip 3.

The Galaxy Z Flip 3 5G now features a refined design, mostly flagship specs and a $999 price tag. It’s a contender for the masses now from price alone, sitting alongside the iPhone 12 Pro and Galaxy S21 as a phone that won’t just catch your eye, but also potentially fit your budget.

So have foldables worked out their kinks? Are you giving up anything by opting for the fold? Does it fix the issue of a green bubble? We’ve spent three days thus far with the Z Flip 3, so let’s dive in.

At $999, the Galaxy Z Flip 3 is a pretty well-rounded smartphone and carries the necessary features to be considered a flagship.

It starts with a 1.9-inch Cover Screen that can be used to see the time, swipe through notifications (and dismiss them) and control music among other panels. Opening up the Z Flip 3 reveals the 6.7-inch Infinity Flex AMOLED display complete with a pinhole notch at the top. It’s modern in every sense — including a 120Hz refresh rate — and while not as rigid as a standard screen, we don’t have any immediate concerns. Be warned though, all foldables have a crease in the screen.

Samsung says the screen is 30% stronger over the original and it still has two nibs on the bottom left and right corners to safely open and close. This way you can forcefully shut the phone. Samsung is still using the hideaway hinge which works to ensure a smooth open or close, while also working to prevent debris from getting under the display. The Z Flip 3 is also the first foldable, along with the Z Fold 3, to carry an IP68 water resistance rating. That means it can handle up to 1.5-meters of water for 30 minutes. We wouldn’t recommend putting the Z Flip 3 through this, but we did use it in the rain and it’s still performing just right. There’s still no dust resistance here, though.

The Galaxy Z Flip 3 is a premium flagship smartphone with only a few missing features, namely in the realm of cameras. Here’s how it stacks up to two similarly priced flagships in the Galaxy S21+ and iPhone 12 Pro.

The Galaxy S21+ and Z Flip 3 are nearly identical devices. Samsung’s S21+ is best for those who want a classic experience with three versatile lenses to choose from when taking photos. The Z Flip 3 is a folding smartphone with a more compact and pocketable form that focuses on its ability to flex. super-charged as the S21 Ultra. And in truth, it’s similar to the Galaxy Z Flip 3.

Both feature a 6.7-inch display with a 120Hz refresh rate and a Qualcomm Snapdragon 888 processor with 8GB of RAM. They’re running Android 11 with Samsung One UI, though the Z Flip has come customizations to take advantage of the folding capabilities. On the subject of cameras, they both have a pinhole notch on the front, which contains an identical 10-megapixel camera.

If you care about the ability to zoom, the S21 is the obvious choice here as it includes a dedicated telephoto lens. It’s a 64-megapixel telephoto lens which can zoom in 3x optically to capture a rich level of detail and up to 30x using Space Zoom. That’s a Samsung marketing term, but combines optical and digital zoom together for a clear shot at times. Both the Z Flip 3 and the S21 feature the same 12-megapixel wide and 12-megapixel ultra wide lens though — AKA you’re left with two great ways to capture an image in nearly any scenario. We are left missing the telephoto on the Z Flip 3 though, especially at nearly $1,000.

The Z Flip 3 and S21+ both perform adequately and quite fast as modern smartphones also. Nearly all apps have plenty of breathing room and that goes for more intense tasks like creative edits or gaming on the go. They both support 5G, mmWave and Sub6, out of the box as well.

Ultimately it comes down to the fold and that additional lens. The Z Flip 3 is not the traditional form factor. It folds in half and easily fits in pockets. The Galaxy S21+ fits in the conventional modern smartphone mold and performs very well in that world, plus that additional lens is excellent for photo fanatics.

They’re both priced at $999.99, but Samsung is offering aggressive trade-ins discounts and several promotional credits.

The biggest difference between these two devices is obvious: iOS vs Android, which mostly comes down to personal preference. There’s basically an app equivalent on either platform except for Apple’s services. Yes, FaceTime will be coming to the web and therefore to Android devices, but there’s not an official workaround for iMessage. Apple Music is available in the Play Store on Android and much of Google’s services are found in the App Store on iOS. Both the Z Flip 3 and iPhone 12 Pro deliver a fast experience in everyday use though. The Apple-made A14 Bionic and Qualcomm Snapdragon 888 are both based on the latest standards for processing as well.

Both feature OLED screens which deliver a crisp and accurate viewing experience. The 6.1-inch display on the iPhone 12 Pro tends to exaggerate colors less and is smaller than the Galaxy Z Flip 3’s 6.7-inch AMOLED display. We’d also say that the iPhone 12 Pro has an entirely glass display, while the Z Flip 3 is a mixture. Both feel strong and are responsive in use.

The iPhone 12 Pro pushes for authentication through Face ID made possible through the True Depth Sensor. It’s fast and a safe way to unlock your phone, but in this time of masks it’s not the most helpful. Samsung has a fingerprint sensor built into the power button on the Z Flip 3 and it stands as a great way to unlock your phone during a pandemic. It’s also been really responsive in our testing.

Apple’s iPhone 12 Pro is the best way to just point and shoot. The A14 Bionic chip combined with the image processing, really just delivers a great shot close to 99.9% of the time. You also have the added ability to switch between three lenses at all 12-megapixels. This way you’re not sacrificing image quality when you opt for a wider lens. The 12 Pro also features a LiDAR sensor which helps in lower-lighting conditions and delivers a faster auto focus.

The Z Flip doesn’t have many of these traits, but with a 12-megapixel wide and 12-megapixel ultra wide it has about half the equation of the iPhone 12. Samsung offers a bevy of modes — at times too many — and is now in the habit of not upping the saturation of images. It’s a closer to accurate experience, but still processing times can be a bit longer. We’ll embed some test shots below, but the iPhone tends to opt for a cooler image while the Z Flip 3 fades into the warmer tones. For selfies, it’s a pretty even toss up — though the iPhone 12 Pro doesn’t feature a cover screen which is basically the ultimate selfie viewfinder.

Aside from software, form factor and the additional lens there are a lot of similarities between these two $999 smartphones. If you don’t want a big phone we’d push you immediately towards the 12 Pro. It’s easier to hold in the hand and doesn’t take up as much space when the Z Flip 3 is fully expanded. The 12 Pro lacks the ability to fold and this fun new form factor that can fit into smaller pockets, though.

We’re still not ready to state our final opinion on the Z Flip 3, but we can say it’s one of the most refined foldables we’ve used to date and is likely the best option for someone who won’t settle for a smartphone that doesn’t fold.

The question does arise, though — do you need a foldable? The answer is probably no, especially at the $999 Z Flip 3 price range. We’d hedge that some power users could really take advantage of a device like the Z Fold 3, especially with the new multitasking features that let you use any app with multi-window.

Samsung has made an entertaining device here and the form factor of a compact clamshell is cool. We’ll also admit that the cover screen is really neat here and the widgets let you do a whole lot more. There’s not a key affordance here, aside from it being foldable. It is a very intriguing device and is really cute.

For most people, the iPhone 12 Pro or Galaxy S21+ stand as the best option. We’d even tell you to consider the $799 iPhone 12 if you can live without a telephoto lens or the S21 if you want a smaller screen. You don’t need to worry about durability and you’re still getting a modern smartphone experience.

We’re not going fully mainstream yet with foldables and that likely won’t happen until we see more adoption from other phone makers. The Galaxy Z Flip 3 stands as the most impressive attempt at an affordable foldable smartphone and for those who want a more compact device or the latest tech innovation, it deserves a look. We’ll be unpacking the Z Flip 3 soon in our full review.