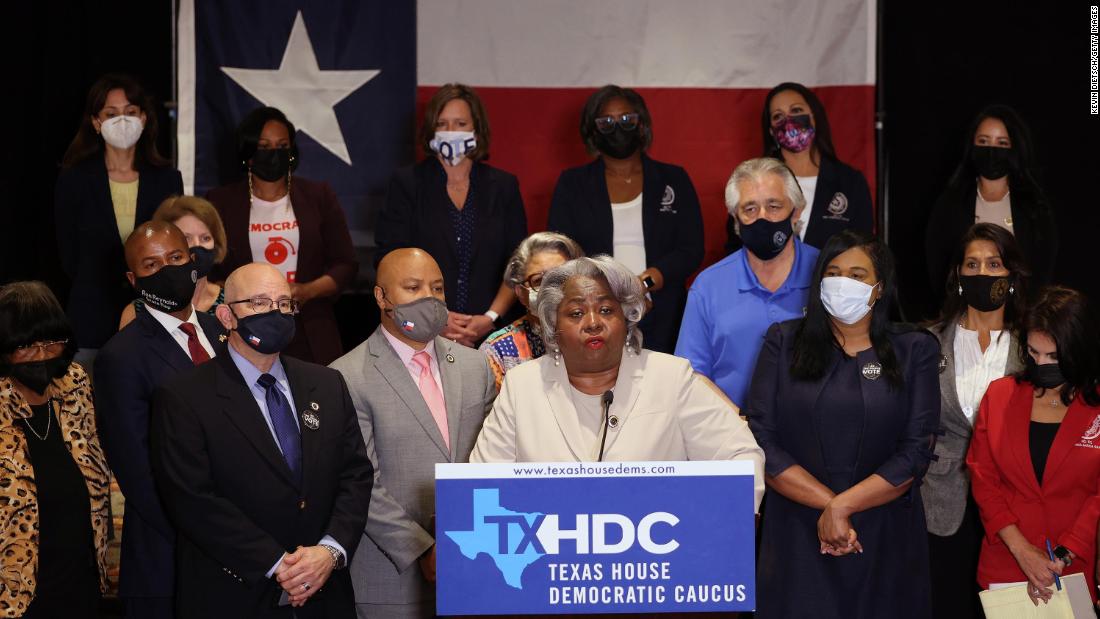 The ruling means that many of the Democratic lawmakers who returned to Texas but continue to break quorum during the second session could now be at risk for arrest after state House Republicans voted later Tuesday to direct the sergeant-at-arms to compel attendance “under warrant of arrest if necessary.”

The Texas House Speaker’s office confirmed Tuesday night that the Speaker has signed civil arrest warrants for 52 House Democrats who are absent without excuses. Those warrants will be delivered to the sergeant-at-arms in the morning for service.

The 80-12 vote came just hours after the Texas Supreme Court ruling and was mostly along party lines, with one House Republican voting against the motion.

Urrutia’s order signed Sunday barred Texas’ Republican Gov. Greg Abbott and Texas House Speaker Dade Phelan from “issuing any warrant or other instrument” and “detaining, confining, or otherwise restricting a Texas House Democrat’s movement without his or her consent.”

“It is no surprise that Republican Governor Greg Abbott and House Speaker Dade Phelan want to arrest their political opponents. Thankfully, this is still the United States of America. We will defend the freedom to vote, and we look forward to our temporary injunction hearing on August 20th,” said Texas state Reps. Trey Martinez Fischer, Gina Hinojosa, and Jasmine Crockett in a joint statement issued after the Supreme Court ruling. The three Democrats are part of the 19 who filed the original petition for relief.

The lawmakers were among the more than 50 Democrats who flew to Washington, DC, to prevent their Republican counterparts from having a quorum needed to carry on legislative business during July’s special session.

In a statement, Abbott’s press secretary Renae Eze said, “We look forward to the Supreme Court upholding the rule of law and stopping another stall tactic by the Texas Democrats.”

CNN has reached out to Phelan’s office for comment.

Abbott and Phelan, represented by Texas Attorney General Ken Paxton, had asked the Texas Supreme Court to overturn Urrutia’s order on Monday, saying the judge’s order had stopped them from exercising their constitutional authority.

“Compelling the attendance of its members is a prerogative given to the House by the Texas Constitution,” the two Republican leaders argued in their petition.

The petition also claimed that the district court’s order could make the rare move of breaking quorum a more frequently used option in the future stating, “Rather than leaving the State to break the quorum, minority factions need only convince a court to ignore the Texas Speech and Debate Clause and secure a temporary restraining order against the Speaker […]or other temporary injunctive relief to wait out a legislative session and prevent the Legislature from carrying out Texans’ interests.”

The governor and House speaker’s emergency motion, first reported by the Austin American Statesman, requested that the Supreme Court overturn the order before Tuesday night — citing the ongoing second special session that began this weekend.

There is a hearing on the temporary restraining order scheduled for August 20. And it expires in two weeks, if it is not extended.

Texas House Democrats successfully blocked an election overhaul bill that would add new restrictions and criminal penalties to voting in the Lone Star State when they broke quorum by flying to Washington, DC, during the first special session called by Abbott in July.

Members said they left the state to lobby congressional lawmakers for federal voting protections, but also to avoid being arrested and forced back to the Texas state Capitol.

More than two dozen Texas Democrats vowed to remain in Washington through August, while others have left the nation’s capital but haven’t returned to the Texas House for the new special session.

On Monday, the Texas House experienced higher attendance, but once again failed to reach a quorum. The Texas House, which requires two-thirds of members to be present for a quorum, fell five members short of that number on Monday night.

Members voted to institute a “call of the House,” locking the chamber doors and requiring members to get written permission from the Speaker to leave. The House did not call to send law enforcement to find and compel members to attend on Monday.

Abbott’s agenda for the second session includes “election integrity,” “bail reform,” tightening enforcement at the US border, and legislation preventing students from playing on sports teams of a different sex than they were assigned at birth.

This story has been updated with additional details Tuesday.