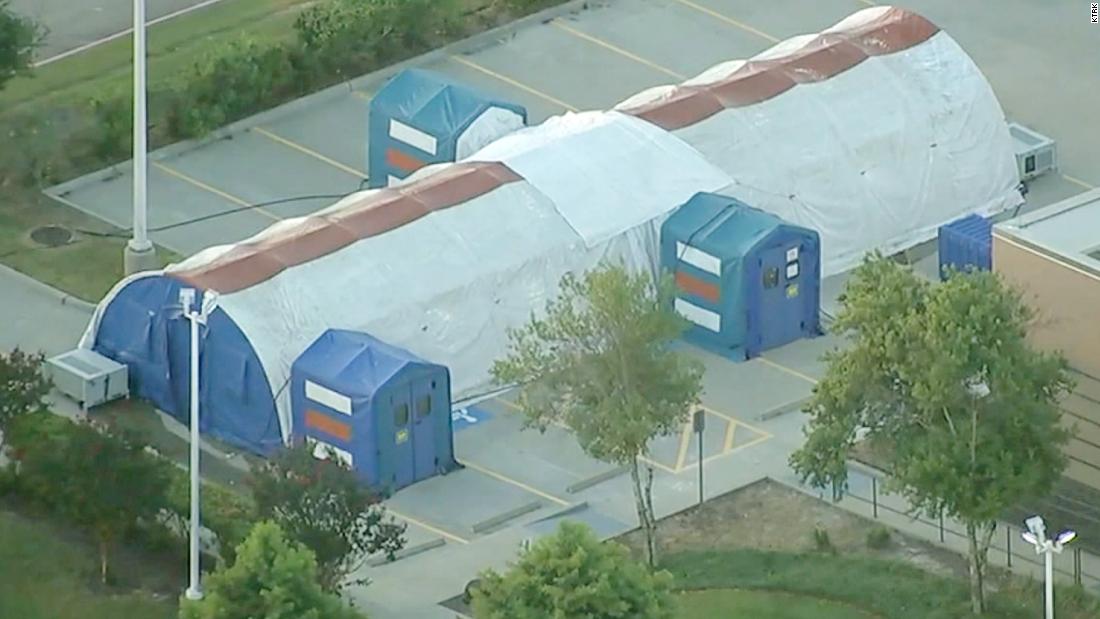 Harris Health System in Houston is reporting 1 in 4 patients at its two hospitals have tested positive for Covid-19.

Ben Taub Hospital’s intensive care unit is at 95% capacity with 27% of utilization by Covid-19 patients and Lyndon B. Johnson Hospital, where the tents are being set up, is at 100% ICU utilization with 63% Covid cases, Harris Health spokesperson Bryan McLeod told CNN in an email.

“They are still in the process of completing set up, and installing IT equipment, etc. There is no pre-determined time for when they will begin to be used, but they want the tented environment to be ready to go in the event they are needed,” McLeod said.

President and CEO Esmaeil Porsa told CNN’s Victor Blackwell that there are 122 Covid patients at the system’s two hospitals and the number increased quickly.

“What is intriguing about this surge is not so much the magnitude of the numbers, but the speed at which the numbers are going up,” Porsa said.

“It took us five weeks to get from one (patient) to 120. When I look at the last surge, it took us three months — the rapid rise in the amount of Covid patients is very concerning.”

Another lagging problem is personnel shortages. Porsa said he would welcome federal aid to relieve some of the pressure. The hospitals are 254 nurses short leaving hospitals with no options but to hire agency nurses at high prices, he said.

Porsa encouraged everyone to get vaccinated, saying that not one of the 128 patients that have died from the virus in the health system’s hospitals this year were fully vaccinated.

“The situation is bad and only getting worse. We are not heading towards a crisis, we are in the middle of a crisis,” Porsa said.

Baby airlifted due to lack of beds in Houston

An 11-month-old girl had to be airlifted on Friday to a hospital 150 miles away because of a shortage of beds in Harris County.

Ava Amira Rivera tested positive for Covid-19, according to Amanda Callaway, a spokeswoman for Harris Health System. Callaway said Ava was having seizures and needed to be incubated but Lyndon B. Johnson Hospital, where she was first taken, does not offer pediatric services.

None of the major pediatric hospitals in the area had beds available, Callaway said.

She is doing well and on the road to recovery, said Dr. Dominic Lucia of Baylor Scott & White McLane Children’s Medical Center in Temple, Texas.

In Texas, the seven-day moving average was 11,042 new daily cases on August 2, according to a CNN analysis of Johns Hopkins University data.
Gov. Greg Abbott has said he will not impose a statewide mask mandate and issued an executive order that banned local governments== from requiring masks or mandating vaccinations.

The governor said his reason behind not issuing another mask mandate is due to people having “immunity to Covid through the vaccination or through their own exposure and recovery from it.”

“It would be inappropriate to require people who already have immunity to wear a mask,” Abbott told CNN affiliate KPRC recently. “But also, what we know is, everyone watching the show and in the state of Texas know exactly what the standards are and if they want to adopt them in order to help protect themselves.”
Abbott has encouraged Texans to get vaccinated but notes that vaccines in Texas are “always voluntary, never forced.”