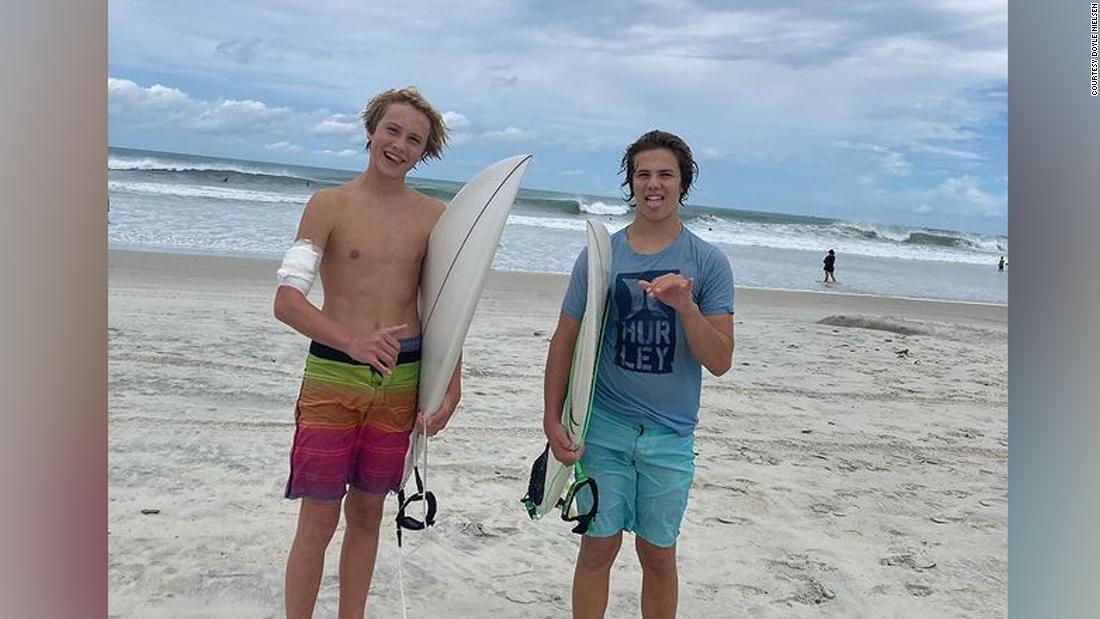 “It felt like something hitting me super hard on the right side and kind of my back, and then I saw some motion, as it was hitting me, but I couldn’t tell what it was until a second later,” the 16-year-old told CNN.

Nielsen didn’t see the shark, but other surfers did and yelled for him to get out of the water.

A shark bites Nielsen and then starts splashing around — walloping him with its fins as it swam away.

The whole incident was over in an instant.

As he paddled back to shore, Nielsen saw that his shirt sleeve was shredded and his arm was bleeding.

“I could tell that it wasn’t too bad,” Nielsen said. “But I could definitely tell that I got bit by a shark.”

Doyle’s mom, Lizzy Nielsen, was watching his brother Logan surf down the beach and didn’t see what happened.

“He was with a big group of people around the lifeguard, and then he was like, ‘Hey, Mom, I got hit by a shark,’ and I thought he was joking,” she said. “He was just standing there, fine.”
A lifeguard bandaged up the bite and Nielsen’s mom took him to the hospital where he got nine stitches.

They live in Woodstock, Gerogia, near Atlanta, but she had brought the boys down to Florida so they could surf the waves kicked up by Hurricane Larry as it moved north through the Atlantic Ocean. Doyle was bitten on September 9, on the first day of their trip, his mom said.

Nielsen was back home in Georgia, where he’s a junior in high school, when someone sent him the video.

“It was just wild,” Nielsen said. “I was on my phone all class period looking at that video over and over because I was I was so surprised and it was just crazy.”

He said some of his classmates thought he was messing with them when he told them what happened, since shark bites aren’t something you see in landlocked, North Georgia.

His mom said that watching the video was scarier than the actual incident because he was so calm at the time.

“When I watched the video… the whole day I was kind of shaking, like ‘that was really scary,'” Lizzy Nielsen said.

Florida routinely ranks as the shark attack capital of the world. Last year, eight people were bitten in Volusia County, which includes Ponce Inlet, according to the Yearly World Shark Attack Summary from the International Shark Attack File.

Gavin Naylor, director of the Florida Museum of Natural History’s shark research program, told CNN that the shark that bit Doyle appeared to be a black tip shark, based on the brief glimpse of the animal in the video.

He said black tip sharks will often come very close to shore and will feed on schools of fish like mullet and menhaden that gather near sand bars.

“Sand bars are also where the best surf breaks are because the rapid change in depth causes the waves to break,” Naylor said. “So the sharks find themselves seeking out the same spots as the surfers.”
Nielsen said he was disappointed to miss out on good waves after he was bitten. The doctor said to stay out of the water to avoid infection.

The incident hasn’t discouraged him from surfing. Nielsen said he might even feel safer because the odds of getting bitten by a shark twice are so small.
“I’ll be right back out there when I can,” he said.