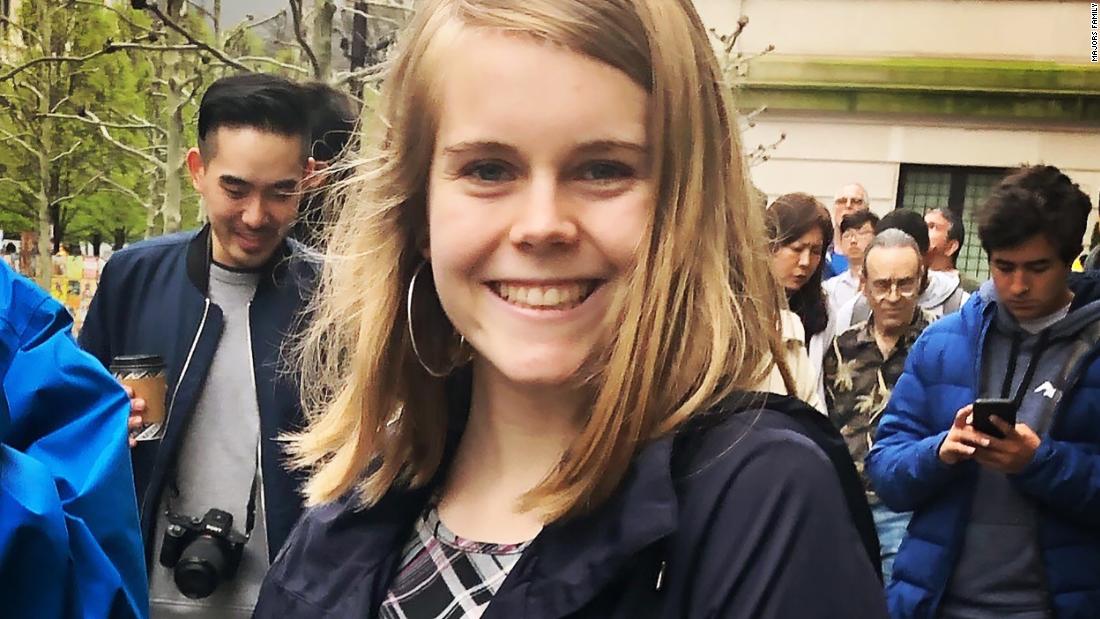 Luchiano Lewis, who was 14-years-old at the time of the murder but who was charged as an adult, cried as he spoke in court Thursday, saying he was truly sorry.

“As a human I feel ashamed, embarrassed and sad at the role I played in destroying two families. Nothing I say or do can change that fact,” Lewis said.

Majors was an 18-year-old musician, poet and “fledgling journalist” who was about to finish her first semester at Barnard when she was killed, her parents, Inman and Christy Majors, said in a statement to CNN.

“Our hearts ache as we watch Tess’s friends return to school, perform concerts, start new jobs, and experience all the things that our daughter never will. It is hard for many old friends to be around us. Our grief is too profound. We are too changed from the people we used to be,” the Majors said in their statement.

Prosecutors say Majors was in Morningside Park in December 2019, near Barnard, when she was approached by Lewis and two other teens and was stabbed. One of the teens, Rashaun Weaver, was charged with two counts of second-degree murder and pleaded not guilty. CNN is not naming the other teen who was not charged as an adult and pleaded guilty to a first-degree robbery charge. Both Lewis and the unnamed teen said in court statements that Weaver stabbed Majors.

Assistant District Attorney Matthew Bogdanos said Lewis poses a danger to society in court Thursday, detailing how in the year-and-a-half since he was taken into custody he has “engaged in acts of physical aggression again and again” while in custody at a juvenile detention facility. Bogdanos said Lewis was part of a “brutal gang assault” on another inmate over the summer, and another group assault last month.

“Sadly and troublingly the defendant has learned no lesson from his experience in his case,” Bogdanos said. “Mr. Lewis, though his actions took the life of Tessa Majors and destroyed his own.”

An attorney for Lewis had no comment when contacted by CNN.

Inman Majors left the courtroom before prosecutors played a video of his daughter’s final moments alive, which was taken by a security camera at the top of the steep staircase by the park where Majors was attacked. She died minutes later.

“Here is the end of the brutal attack,” Bogdanos said, referring to the video. “She finally breaks away. She starts walking up the stairs. She’s already been stabbed at least once in the heart. All the bleeding is internal. With each breath, according to the medical examiner, she is closer to death.”

Bogdanos said the attack itself took more than a minute and started on a steep staircase in the park that Majors ran up as she fought against the teens. He said Majors continued to run up another level of the staircase after she had been stabbed.

“She is struggling now up the stairs. She has minutes left to live. She does not realize at this point why she is light-headed or why she’s dizzy or why she can’t walk or why she can’t stand or why she’s about to fall,” Bogdanos said. “And she will get to this lamp pole and collapse. And she will die — face down — on a dirty New York City street at the hands of the defendant and two others.”

Bogdanos told the court on Thursday that the group of three boys had followed at least one other person before attacking Majors, and that the teens had wanted her iPhone.

“That is a long, intentional, pre-mediated attack before which the defendant had many opportunities to stop, to turn away, to walk away, to run away, to do anything,” Bogdanos said.

Bogdanos said Majors was outnumbered and that each teen played a role in her death. “Without each of their actions she gets away,” Bogdanos said.

At his September plea hearing, Lewis described the encounter with Majors in detail. He said the two boys who were with him kicked Majors to the ground and tussled with her in two separate places in the park. Lewis said that while he knew that one of the other teens had a knife that night, he did not know that Majors had been stabbed, let alone killed, until he saw a news story the next morning.

“The next morning, I heard there was a murder in the Park. I looked up the story on a phone and saw a photo of the dead girl and I realized it was the girl we had robbed,” Lewis said, according to a copy of a statement he read in court at the hearing.

Tessa Majors’ parents said in their statement that they have been unable to grieve in peace as court proceedings for the three suspects continue.

“With every legal proceeding, we are forced to re-live the events of December 11, 2019. We have not been able to grieve our daughter properly or in peace. Nearly two years after her murder, we still have very little closure,” the Majors’ statement said.

In 2020, the unnamed teen pleaded guilty to a first-degree robbery charge and was sentenced to 18 months in the custody of Administration for Children’s Services.

Jeffrey Lichtman, an attorney for Weaver, said in a statement to CNN that his client is a 16-year-old who was raised in dire circumstances, with an incarcerated father and a mother who battled substance abuse.

“With all the concern for racial and judicial equality for people of color over the past few years, somehow one segment of this population has been ignored: Black children charged and treated as adults in the criminal justice system,” Lichtman said in his statement. “Does anyone actually think that if Rashaun Weaver was raised as comfortably and with the privilege as the racial justice marchers from the Upper West Side that he would be sitting in a jail cell inside a violent ‘juvenile center’ for almost two years, from age 14, rarely getting to see or even speak to his parents?”

Weaver does not have a trial date but is expected to have another hearing in his case in January 2022, Lichtman said.