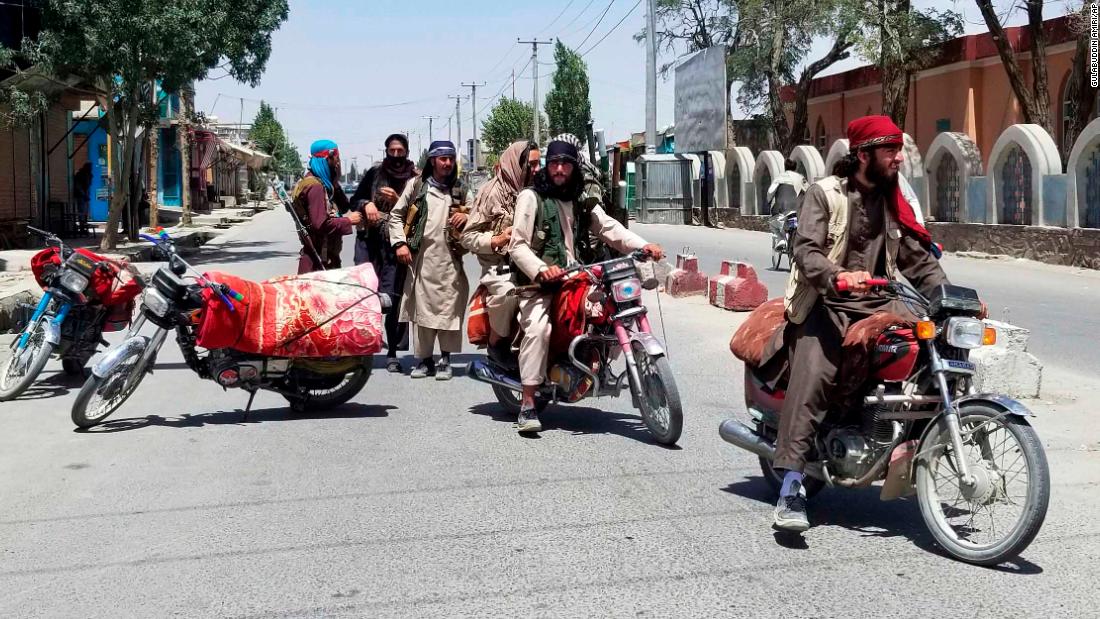 Ghazni fell to the militant group on Thursday morning local time after “long and intense fighting,” according to Nasir Ahmad Faqiri, head of Ghazni provincial council. He said that only one unit of the Afghan intelligence and police has not been taken by the Taliban.

A Taliban spokesman tweeted Thursday that the city had been seized, including the governor’s office, police headquarters and prison. CNN cannot independently verify the Taliban’s claims.

Ghazni is the 10th provincial capital to fall to the Taliban in roughly a week. The city lies around 93 miles (150 kilometers) south of Kabul, on a major highway connecting the capital with Kandahar, Afghanistan’s second largest city.

Kandahar, which lies in the south of the country, has been besieged by the Taliban for weeks, and the group’s spokesperson claimed on Wednesday that they had taken control of its prison. The Taliban claimed they had freed 1,000 inmates and distributed a video apparently showing them walking outside the jail.
Gul Ahmad Kamin, a Kandahari member of parliament, also confirmed that a wedding hall in Kandahar which was the frontline position for Afghan forces is now under the Taliban control. The wedding hall, visited by CNN just days ago, is about 600 meters away from the prison.

With the capture of Ghazni, the Taliban is now in control of key locations both to the north and south of Kabul. Their earlier capture of areas of the Baghlan province, which lies to the north of Kabul, raised alarms among US officials because the location is considered essential for the defense of the capital, according to a Biden administration official.

A senior administration official familiar with one US intelligence assessment said Kabul could be isolated by the Taliban in the next 30 to 60 days, increasing the potential that the Afghan capital could fall under the control of the militant group.

Another assessment puts the potential collapse within 90 days, according to another US official. Other officials have warned that there are multiple assessments with differing timelines.

Afghan President Ashraf Ghani visited the besieged northern city of Mazar-e-Sharif on Wednesday, attempting to rally local commandos who have been engaged in fighting with the Taliban for days. Many of the regional capitals in the provinces surrounding Mazar-e-Sharif have already fallen to the militants and if Mazar is also seized, it will mark the total collapse of the government’s control in the north of the country.

Hundreds of thousands forced to flee

Meanwhile, the United Nations has warned that the humanitarian situation in Afghanistan has deteriorated significantly in recent weeks.

Nearly 390,000 people have been displaced since the beginning of 2021 due to conflict across the country, UN spokesman Stephane Dujarric said during a daily briefing on Wednesday.

UN humanitarian agencies said there has been a huge spike in people leaving their homes since May and that 5,800 people fled to Kabul between July 1 and August 5.

The UN said that they have received food, water, household items and sanitation support, and that while most of them are hosted by friends and family, a growing number of people are staying in the open.

As the situation in the country worsens, the Afghan government has replaced its army chief of staff, after less than three months in the job.

Gen. Wali Mohammad Ahmadzai has been replaced with Gen. Hibatullah Alizia, a spokesman for the Afghan defense ministry confirmed Wednesday.

Alizia previously served as the commander of the Afghan army’s special operations corps, a group of elite troops that work alongside the air force and have played a crucial role trying to contain the Taliban’s nationwide offensive.

Ahmadzai had only been in the post since June.