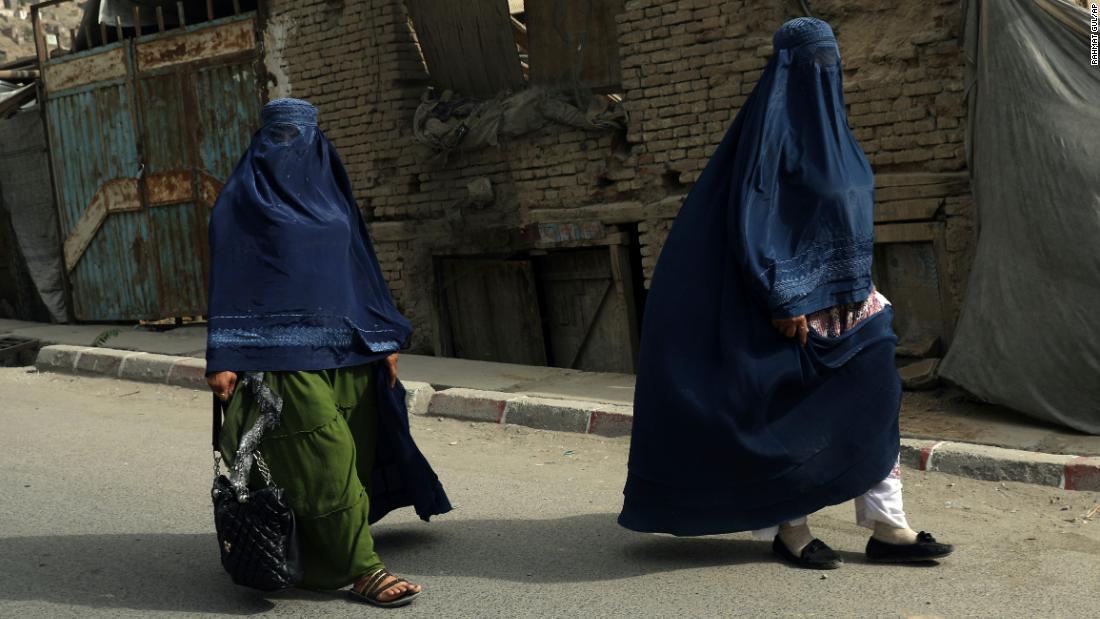 Taliban spokesperson Zabiullah Mujahid said at a news conference on Tuesday that women should not go to work for their own safety, undermining the group’s efforts to convince international observers that the group would be more tolerant towards women than when they were last in power.

The instruction came the same day that the World Bank halted funding in Afghanistan, citing concerns about the safety of women, and within hours of the UN calling for a “transparent and prompt investigation” into reports of human rights abuses since the Taliban takeover.

Mujahid said the guidance to stay at home would be temporary, and would allow the group to find ways to ensure that women are not “treated in a disrespectful way” or “God forbid, hurt.” He admitted the measure was necessary because the Taliban’s soldiers “keep changing and are not trained.”

“We are happy for them to enter the buildings but we want to make sure they do not face any worries,” he said. “Therefore, we have asked them to take time off from work until the situation gets back to a normal order and women related procedures are in place, then they can return to their jobs once it’s announced.”

When last in power between 1996 and 2001 the militant group banned women from the workplace, stopped them from leaving the home unaccompanied and forced them to cover their entire bodies.

The group has insisted its new era in charge will be more moderate, but Taliban leaders have refused to guarantee women’s rights will not be stripped back and many have already faced violence.

The World Bank announced Tuesday it is halting financial support to Afghanistan amid worries about the fate of women under Taliban rule, dealing another blow to an economy that relies heavily on foreign aid.

“We are deeply concerned about the situation in Afghanistan and the impact on the country’s development prospects, especially for women,” World Bank spokesperson Marcela Sanchez-Bender said in a statement to CNN.

And five women from Afghanistan’s renowned robotics team arrived in Mexico on Tuesday, after being issued humanitarian visas.
In the early months of the Taliban’s resurgence in Afghanistan, women have been increasingly isolated from society and many have been the targets of harassment and attacks — including the high-profile murder of three female journalists in March.
In early July, insurgents walked into the offices of Azizi Bank in the southern city of Kandahar and ordered nine women working there to leave, Reuters reported. The female bank tellers were told that male relatives would take their place.

Amid increasing concern from the international community, the United Nations called for an “transparent and prompt investigation” into human rights abuses “committed by all parties to the conflict” on Tuesday, after an emergency meeting of its Human Rights Council.

But the agency was condemned by a number of non-profit organizations for parsing its language after adopting the resolution, initially proposed by Pakistan.

John Fisher, Geneva director at Human Rights Watch, said in a statement that the UN “failed to create a strong human rights monitoring body and meet its responsibility to protect the Afghan people.” He said the resolution “is a slap in the face to Afghan human rights defenders and women’s rights activists who are watching in horror as the rule of law crumbles around them.”

The Taliban also warned Tuesday that the US must stick to next week’s deadline to pull out, and said they were “not allowing the evacuation of Afghans anymore,” though a source familiar with the situation told CNN on Wednesday that the apparent ban had not yet had a discernible effect on arrivals at Kabul airport.

The source said around 1,000 people were at the airport on Wednesday morning. Some priority local Afghans would get help in the coming hours, the source said, though some applicants for the Special Immigrant Visa (SIV) program — an avenue for Afghans who worked for US forces and agencies to get out of the country — would have to wait.

The source also described a delicate process in which US troops would coordinate with the Taliban to only let certain vehicles in.

“The biggest problem today and yesterday is huge groups of special immigrant [SIVs] evacuees showing up at the south commercial gate asking to be let through the Taliban checkpoints with zero prior coordination,” the source said.

Approximately 19,000 people were evacuated from Afghanistan on Tuesday, including 11,200 evacuees on US military flights and 7,800 on coalition flights, a White House official said Wednesday.

That’s down slightly from the previous day, when the US reported 21,000 people were evacuated from Kabul airport via 37 US military flights carrying 12,700 evacuees, plus 57 coalition flights carrying 8,900 people.

A frantic Western evacuation operation at Kabul’s airport has provided the only faint opportunity for many Afghans to escape the country in recent days, and crowds outside the facility have swelled since the militants seized power.

But US President Joe Biden reiterated that he aims to stick with his August 31 deadline to withdraw troops from Afghanistan — as long as the Taliban does not disrupt ongoing evacuation operations or airport access.