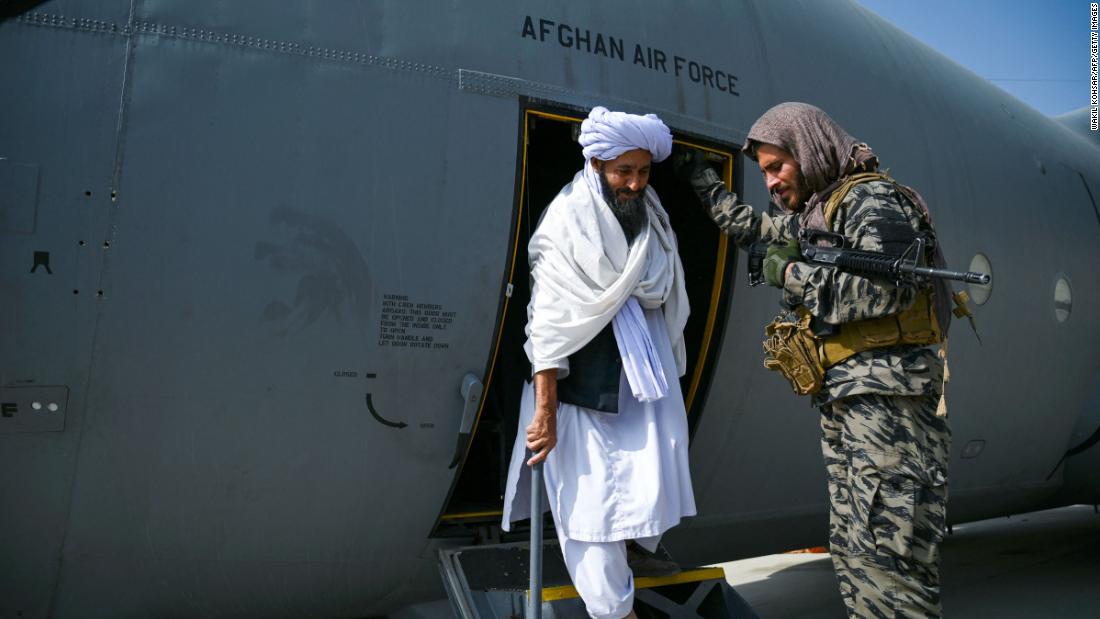 The airport that in recent weeks had been the epicenter of a frantic Western evacuation mission was transformed into a stage for Taliban celebrations after the final US plane departed just before midnight on Monday night, bringing an end to America’s longest war.

Videos showed Taliban fighters filling the night air with gunfire and walking through the airport. As the sun rose on Tuesday, footage showed the militants making their way through an abandoned hanger strewn with equipment the US left behind.

In one video, militants dressed in US-style uniforms and holding US-made weapons examined a CH-46 Sea Knight helicopter parked inside a hangar. Taliban fighters were also seen posing for photographs while sitting in the cockpits of planes and helicopters that once belonged to the Afghan Air Force.

Some of the US military equipment used in Afghanistan was removed from the country and other items were disabled, Gen. Frank McKenzie, Commander of US Central Command, told reporters during a briefing on Monday.

Standing on the airport runway on Tuesday morning, Taliban spokesman Zabihullah Mujahid told a small crowd that “This victory belongs to us all.”

He was joined by heavily armed fighters from the Taliban’s Badri 313 special forces brigade, kitted out in camouflage uniforms and desert boots.

Mujahid congratulated the Taliban fighters lined up, and indeed “the whole of the nation.” He said the Taliban wanted to have “good relations with the US and the world.”

On Tuesday morning, Afghanistan’s roughly 38 million people woke to a new phase of the Taliban’s takeover of the country for the first time since the 1990s, when it imposed a barbaric interpretation of Sharia law that banned girls from school, stoned women for adultery, and plunged the country into economic crisis.

The Taliban have pledged to govern more moderately this time around, and said they would still allow foreign nationals and Afghans with proper documentation to leave the country after August 31. But many Afghans are skeptical of their claims, and huge question marks hang over the Taliban’s ability to run the country

An immediate challenge for the Taliban will be securing Hamid Karzai International Airport, a vital lifeline to the rest of the world — both for Afghans and foreign nationals wanting to leave, and for aid to get in.

Afghanistan is heavily reliant on foreign aid, and the WHO and UNICEF have already struggled to get critical food and medical supplies to the airport amid the mass evacuation operation.

Even before the political upheaval of recent weeks, Afghanistan represented the world’s third-largest humanitarian concern, with over 18 million people requiring assistance, according to UNICEF. But with no commercial aircraft currently permitted to land in Kabul, getting aid in will be difficult.

Restarting commercial flights will also be crucial for people still wanting to leave the country but who did not make it onto military evacuation planes.

Secretary of State Antony Blinken said the US and allies were discussing ways to reopen the airport as quickly as possible to facilitate safe travel out of Afghanistan for Americans, US legal permanent residents and Afghans who worked with the US.

“We discussed how we will work together to facilitate safe travel out of Afghanistan, including by reopening Kabul’s civilian airport soon as possible,” Blinken said. “And we very much appreciate the efforts of Qatar and Turkey, in particular, to make this happen. This would enable a small number of daily charter flights, which is a key for anyone who wants to depart from Afghanistan moving forward.”

Turkey’s Foreign Minister said Sunday that Ankara had been in talks with the Taliban about providing technical help to operate Kabul airport, Reuters reported.

Cavusoglu said inspection reports showed that runways, towers and terminals, including those in the civilian side of the airport, were damaged and needed repairing.