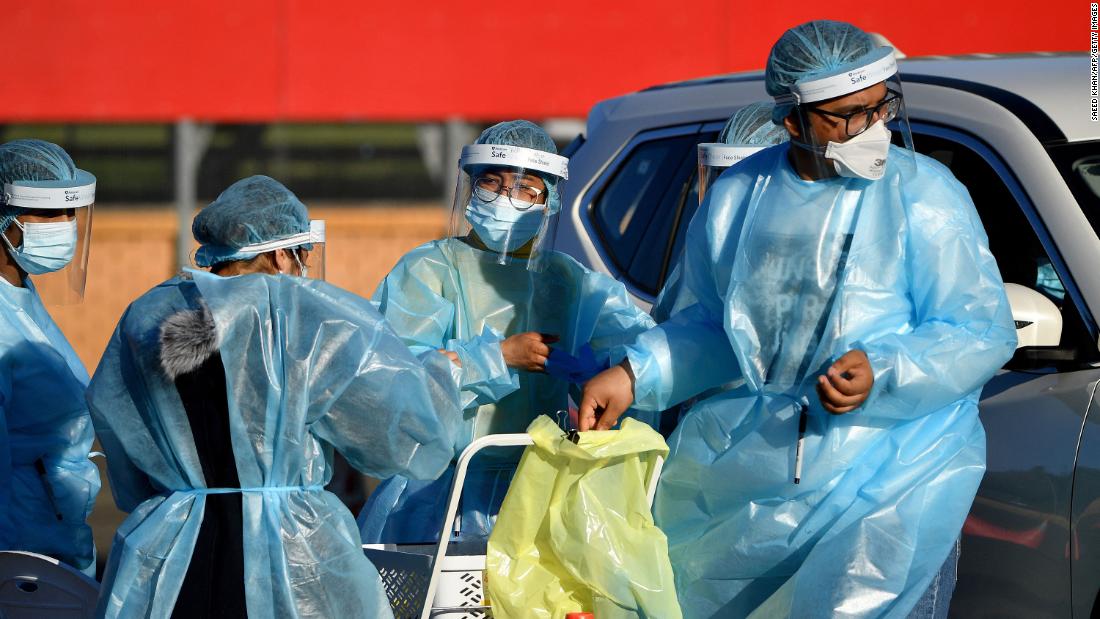 Four of the five people that died were unvaccinated while one had one dose, New South Wales state health authorities said, as they implored residents to get inoculated as early as possible.

Authorities also announced a one-week lockdown from Thursday in the region surrounding the state’s second-largest city of Newcastle, 140 kilometers (87 miles) north of Sydney, after six cases were reported there.

That will place an additional 615,000 people under lockdown, raising the total in New South Wales under strict stay-home restrictions to 6 million people out of 8 million in the state, or about a quarter of Australia’s population.

The authorities suspect the outbreak began with a beach party near Newcastle after people traveled from Sydney, an apparent violation of the city’s lockdown.

“Our strongest focus … is getting to the bottom of how the disease was transmitted and introduced into Newcastle,” New South Wales Chief Health Officer Kerry Chant told reporters, as most cases were still being detected in Sydney, the state capital and Australia’s largest city.

There were 259 new Covid-19 cases in Sydney, out of 262 in all of New South Wales, health authorities said, daily records for the city and the state, which reported a previous high of 239 on Sunday.

There have been more than 4,300 cases in New South Wales during the latest surge that began seven weeks ago after the first case of the Delta variant was detected in an unvaccinated, unmasked limousine driver who transported overseas airline crew.

In the state of Queensland, whose capital Brisbane is under lockdown, another 16 Covid-19 cases were reported on Thursday, the same as the previous two days.

“If we were to wait even just a few days there is every chance that, instead of being locked down for a week, this gets away from us and we are potentially locked down until we all get vaccinated. That’s months away,” Andrews said in state capital Melbourne.

People in Victoria must stay home unless they are doing essential work, buying food, getting exercise, receiving or providing healthcare or getting a Covid-19 vaccine.

With the new restrictions in place, some 13 million people across Australia’s three largest cities of Sydney, Melbourne and Brisbane will be under lockdown from Thursday night.

In New South Wales health officials are imploring residents, especially people above 60, to get inoculated.

The five deaths in Sydney included three men in their 60s, one man in 70s and a woman in her 80s, taking the total number of deaths in the latest outbreak in New South Wales to 21.

“Please now is the time to strongly consider getting vaccinated … I put out a plea to you – make an appointment. Get vaccinated,” Chief Health Officer Kerry Chant said.

With around 35,200 Covid-19 cases and 932 deaths, Australia has avoided the high caseloads of other developed countries but its vaccination figures are among the lowest, with only 20% of its population over 16 fully vaccinated.

New South Wales Premier Gladys Berejiklian has tied the vaccination rate to easing lockdown restrictions on August 28, setting a target of 6 million shots by the end of the month that would cover half the state’s adult population. About 4 million doses have been given so far in New South Wales.

But the growing list of new venues where Covid-19-positive people have visited while infectious is tempering any optimism. About one-fifth of cases reported in New South Wales on Thursday were active in the community, in line with the trend over the last several days.

Victoria also provided an example of how active community cases are likely to cause more cases.

The state, which ended a lockdown only weeks ago, announced that the eight new cases are mostly linked to at least 3,000 close contacts. Authorities warned that would significantly rise, raising the prospect of more curbs.

“Given our understanding of the school community as well as the other exposure sites that are coming online, we would pretty quickly pass 5,000 to 10,000 primary and secondary close contacts within hours if not days,” Victoria Health Minister Martin Foley said in Melbourne.