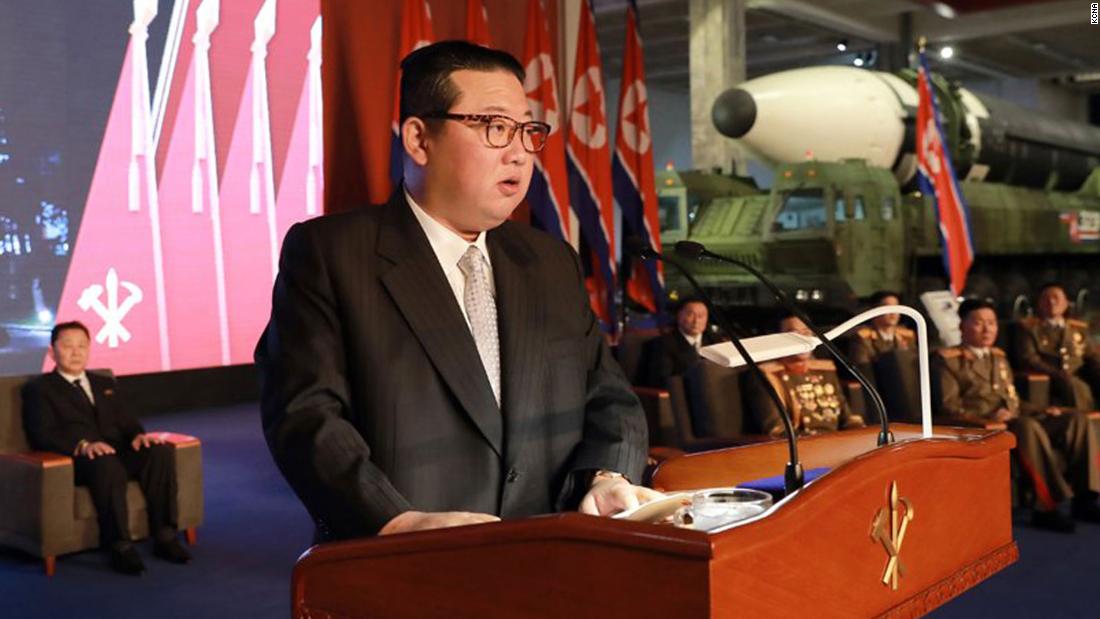 Kim made the comments as he stood against a backdrop of missiles at the Defense Development Exhibition to mark the 76th anniversary of North Korean Workers’ Party.

Photos of the exhibition, released by KCNA, appear to show an intercontinental ballistic missile (ICBM) that analysts believe is the Hwasong-16 — one of the world’s largest ballistic missiles — first shown at a military parade in October 2020.
Also pictured is a hypersonic glide vehicle, which allows missiles to theoretically fly as fast as 20 times the speed of sound and can be very maneuverable in flight — making them almost impossible to shoot down, according to experts. Last month, North Korea claimed it had successfully test-fired a new hypersonic missile, named Hwasong-8 — but its exact specifications are not yet known.

South Korean military said after the launch the missile appears to be in early development and it would take considerable time for it to be deployed.

Jeffrey Lewis, a professor and nuclear weapons expert at the Middlebury Institute for International Studies, said the exhibition focused on “the vast array of new missiles developed over the past five years” in North Korea.

“The exhibition prominently features a gigantic missile that North Korea displayed in a parade last year and is likely intended to carry multiple nuclear warheads,” he said. “It is both a display of past achievements, as well as a warning of what’s to come.”

Describing the missiles as “our precious (weapons),” Kim said every country should maintain strong military power even in peaceful times, as self-defense capability is the “root of a nation’s existence and security for development,” KCNA reported.

He blamed the US for “raising tensions in the region with its wrong decision-making” and accused Washington of being antagonistic toward North Korea.

Kim also said South Korea’s “hypocritical attitude” of building up its own arms while “shackling (North Korea) with the unlawful and ruthless UN resolution and the tacit protection of the US,” was harming the emotional sentiment between the Koreas.

Pyongyang is barred from testing ballistic missiles and nuclear weapons under international law. Previous tests have been met with international opprobrium and sanctions from the United Nations Security Council.

South Korea’s weapons development, including its missile capabilities, has been picking up speed as the country becomes more wary of the growing missile program in North Korea and as Seoul tries to become less dependent on the US.
Last month, Seoul tested a new ballistic missile (SLBM) from a submerged 3,700-ton submarine, according to South Korea’s Defense Ministry.

“We express our deepest regret for the reckless ambition of South Korea and its double-standard, illogical, and robbery-like attitude promoting unfairness toward the other side,” Kim added, referring to the South’s latest weapon developments.

The North Korean leader said the country’s “main enemy is the war itself,” not South Korea or the US.

But he warned North Korea will not tolerate any further attempts to undermine its right to self-defense.

“As long as South Korea does not risk us and does not interrupt the exercise of our sovereignty, I assure you, there will be no tensions on the Korean Peninsula,” Kim said.